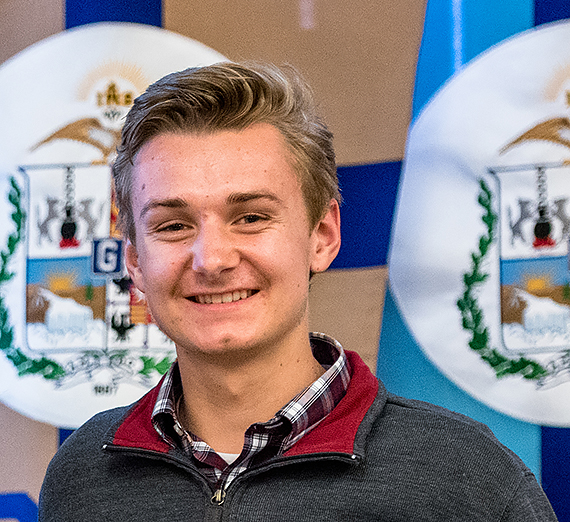 Gonzaga University’s Political Science department awarded two Jefferson Scholarships in the 2018 spring semester. The scholarships are available only to first year students majoring in Political Science who are persons of promise as they study and learn in their undergraduate years. Those gaining the scholarship receive two years of financial aid, with an option of applying for a third year.

Concluding his application essay, Weston Hart lauds the influence and social value of the teaching profession, especially exemplified by one of his high school history and social studies teachers in his public school in Colorado. Weston plans to intern in the office of a member of Congress, and he is gaining a double major in economics and political science. He hopes to work in Washington, D.C. in the summer of 2019 (though warned of the quite un-Colorado humidity back East!), and in future studies gain a law degree and become a public defender or a government attorney. He hopes to work in immigration law and supply services to those persons unable to get legal advice. But, as Weston reports, the “final and perhaps most important career goal is slightly less glamorous,” that is, to become a public school system history and social studies teacher. Most of us recall several teachers who have made lasting, virtuous impacts on us. The sinews and vitalities of civilization are made from such generation-to-generation communions. He wishes to emulate and inspire as did his own teacher when he was in high school.

How did you find your way to a Political Science major?
Ever since I took AP U.S. History during my sophomore year of high school, I knew that political science was something that I wanted to further pursue at the college level.

How has your study of political science contributed to your academic and personal development?
In one way or another, politics shape virtually every aspect of contemporary society. Studying political science at Gonzaga has enabled me to gain a deep understanding of the issues faced by governments and citizens alike and will certainly help me achieve my career goals of public service and employment in the legal field. On a personal level, studying political science forces students to consider the multiple sides of every policy argument and judge proposals in an objective manner. This ability to rationalize is sorely needed in today’s divisive American political system.