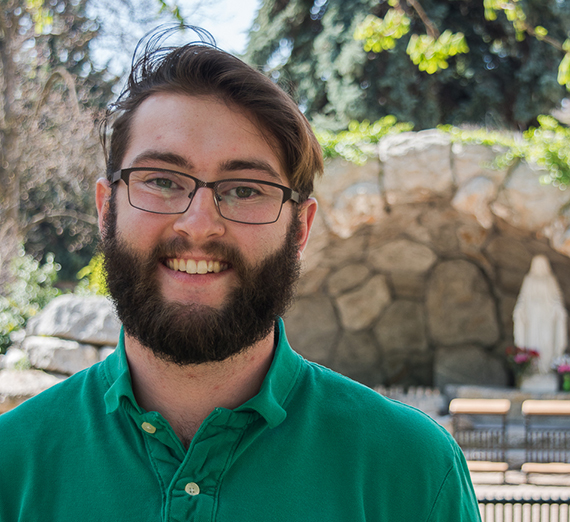 Each year the English Department honors an exceptionally accomplished graduating senior, voted on by the full department as the year’s outstanding Senior English Major. The award is named in honor of Father William T. Costello, S.J., a longtime faculty member in the department.

This year, the Fr. William T. Costello, S.J. Outstanding Senior English Major Award is given to Colin Bonini, not only for his exemplary and “joyful” intellectual curiosity, his work ethic, and his generosity to his peers; but for the maturity and creativity of his work as a writer. Colin has excelled as a literature student and as a writer over his years at Gonzaga, with his achievements as a developing writer of graphic fiction particularly outstanding.

In the words of Dr. Tod Marshall, with whom Colin is completing a major Independent Study this year, “[This work with Colin] has been a productive and wonderful journey. One of my favorite parts…has been his creation of a comic for Robert Hayden’s ‘Those Winter Sundays.’ [Colin’s] visual interpretation showed me that he not only has a talent for drawing (and discerning significant detail), but that he is the best sort of our ‘new’ students—fluent in image, pithiness (if need be), and engaged with new forms while also respectful and interested in more traditional art forms.”

Future Plans:
I will be moving to Sydney, Australia, in late September and am hoping to enroll in either University of Sydney's Master of Publishing course or Macquarie University's Master of Media course.

How has your major contributed to your professional or personal development?
I've learned more about myself from reading the works of other people than I ever would have anticipated. Being an English major exposed me to more perspectives, introduced me to more philosophies, and provoked more moments of critical thinking than I would have thought possible four years ago.

Reading so many diverse stories and essays from authors placed in different time periods and points on the globe has helped me locate my own unique perception of experience in the world around me. The experiences I've had as an English major have shaped the way I view the world, and I hope to share this perspective with people around me the same way all the authors, professors, and classmates I've encountered at GU have. The English department has developed my writing and thinking skills, sure, but most importantly it has encouraged me to play a part in our developing world.

What has been your proudest or most significant accomplishment during your Gonzaga career?
Probably winning this award. If that doesn't count, I have a few poems published in Reflection in the past year that I'm very proud of.