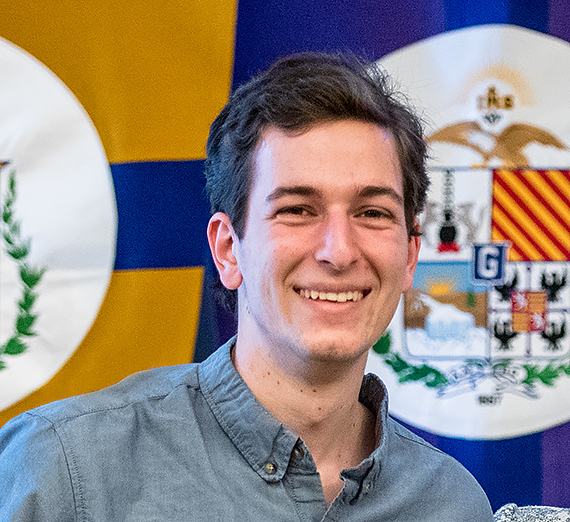 Gonzaga University’s Political Science department awarded two Jefferson Scholarships in the 2018 spring semester. The scholarships are available only to first year students majoring in Political Science who are persons of promise as they study and learn in their undergraduate years. Those gaining the scholarship receive two years of financial aid, with an option of applying for a third year.

In his grade eleven and grade twelve years in San Diego, Connor Ffrench distinguished himself through his avid and persistent interest in international relations, especially the United Nations, and in local, state, and federal elections. The Jefferson Scholarships mean to encourage service to the wider society, and clearly Connor Ffrench has found two especially significant services, one to better appreciation of our interdependent global relations and the other to the integrity of America’s elections. Further, his studies include both political science and mathematics, and this combination of efforts holds a fine promise of well-researched, fact-based analyses of policy and political questions. Connor describes himself as being “in love” with American government. From Aristotle, and others later, we learn that the finest citizen is one who loves and cares for his or her society, but cares enough to be critical, analytic, and engaged for the well-being of all.

Professional goals:
I hope to work either in a state legislature on crafting laws to improve our election systems (including methods of voting, security of the vote, and increasing voter access), or in the diplomatic service, helping to strengthen ties with the allies we have while working to create new ones for the future.

How did you find your way to a Political Science major?
My interest in politics comes from my love of history and mathematics. From history, I have seen governments and political power used for both right and wrong, so I decided to work to make it right. From mathematics, I have learned that there is almost always a solution if you are willing to look deep enough into a problem. Late in my junior year in high school, I decided that political science coupled with math would be the best way for me to go about achieving my goals.

How has your study of political science contributed to your academic and personal development?
In high school, I took several political science courses that encouraged me to go above and beyond what I had previously done. Besides helping me refine my writing style, these classes help me focus my attention onto election systems and how they affect the way a country is governed. The professors also encouraged me to take direct action by serving as a poll worker, which I did in both the 2016 primary and the general elections and will continue doing for the foreseeable future.