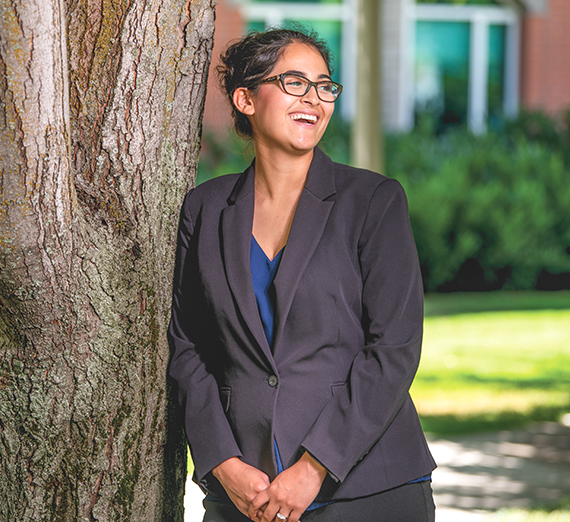 Grace Maldonado is a double Zag. She earned her undergraduate degree at Gonzaga and decided that this would be the best place to study law. As she says, “It’s hard to leave a school whose motto is Ad maiorem Dei gloriam, and I try to encompass it daily.”

You might say that Maldonado’s matriculation was inevitable. She grew up in a household with parents who understood how education would give their children the power to change their lives and change the lives of others. The only time Maldonado had ever visited the Gonzaga campus, before receiving her letter of acceptance, was when she was in third grade. She came for a visit because two of her brothers were graduating from the University. “I remember how proud my father and mother were that their children were graduating from a Jesuit institution,” she says, “an institution that held our Catholic beliefs at its core. At that moment I decided I would go to Gonzaga.” For Maldonado, Gonzaga was the best place for her to “grow her knowledge” and go forth into a meaningful legal career.

This story may make Maldonado’s path sound clear and free of obstacles. But law school is never an easy path, no matter how clear the calling. Maldonado recalls that during her first year, “I was genuinely lost and very confused as to what the heck I was doing.” But then one day, one of her professors, Ann Murphy, “asked me how I was, not how school was going or how I was doing in classes, but how I was. Then she hugged me.” This small gesture helped Maldonado get out of her “1L funk.”

After that moment, Maldonado became a leader in her class. She was selected to be a Smitty Myers Fellow, led the Hispanic Law Caucus, and was president of the Student Bar Association. Her service extended to her work choices while a law student.

Columbia Legal Services selected her as the 2018 Laurel Ruben Farm Worker Justice Fellow, and Maldonado conducted outreach for farmworkers in labor camps in Washington state to educate them on their legal rights. Additionally, the Washington State Bar Association selected Maldonado for Justice’s Past President’s Fellow, which included internships with two Spokane law fi rms, Armitage & Thompson, PLLC and Campbell & Bissell, PLLC. She also was one of the first student interns with Gonzaga Law’s new Immigration Law Clinic, which
is a joint effort with Catholic Charities.

Her interest in immigration law is a tribute to her immigrant parents and their experiences before they became U.S. citizens. “No matter how hard life gets, someone else probably has it harder than me. Why? Because at least my entire family is here with me in the United States,” she says, “I never have to worry about my husband, sisters, brothers, or parents being ripped away from me. I have been blessed with an intact family, but unfortunately, that is not the reality for many people.”

“So,” Maldonado says, “if I can help people like them, why not?”

Her goal is to join a law fi rm and perform the work, not because it is easy, but because it is meaningful. “I want to ensure that my employer never regrets hiring me and that I can excel in whatever it is that I choose to do.”