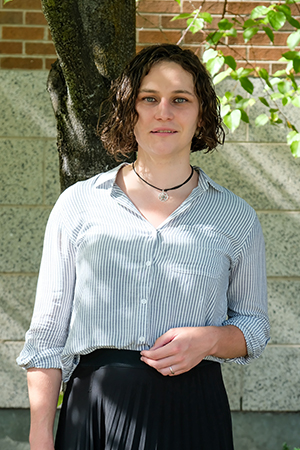 I think that there is something of justice that cannot be taught in a classroom; something that I never got in all my years of Jesuit education and moral philosophy. Intimate understanding of suffering – the collective and compounding nature of it and the tragically personal ways it manifests to harm cannot be captured by any book or syllabus.

I attended high school at Strake Jesuit in Houston, Texas. In my time there, I participated in many service projects – I led retreats, I rebuilt homes after hurricane Katrina, I performed at funerals. It was a habit of service that I continued during my years at Spring Hill College in Mobile, Alabama. But, it was after my formal education that I learned injustice often is not the product of passionate explosions or vitriolic hate – it is much more often the disinterested grind of dehumanizing systems. And Justice? It is not the result of climatic heroics and valor – it is grown in the slow and painful work of human connection.

My journey of understanding started when, after years of internal struggle, I claimed my identity. I am a queer transgender woman. And as I owned this and began the harrowing process of transition, the world changed. My “otherness” – long hidden and denied – was now undeniably visible. I soon saw how “discomfort” quickly escalates into dehumanization and discrimination. In my first year of transition, I was denied housing, fired multiple times, assaulted, barred from using the restroom at my place of employment, and turned away by dozens of therapists and doctors. I watched people’s demeanor shift and their smiles tighten as they read the “M” on my driver’s license. I was turned away from my local polling location due to “inability to confirm my identity.”

Sometimes, I would fight it. I spent years fighting medical denials from insurance providers. I pushed to update by legal documentation pro se, and helped dozens of other trans-folks do the same. But most of the time – I couldn’t. Lawsuits are expensive and the ACLU won’t pick up your case till you’re on appeal. It’s hard to sue a multi-million dollar property management firm, a national insurance conglomerate or the State of Alabama when you make $7.50 /hr.

After several years, I took a job as a charity street canvasser in Houston and was eventually promoted and relocated to Seattle to help train a rebuilding office. While that office did eventually close, I fell in love with the Pacific Northwest and Washington and returned a year later. My landing was a bit rough (including several months of housing instability and homelessness) but I found work at King County 2-1-1, where I listened and engaged with thousands of clients experiencing eviction, utility shut-offs, benefit denials, domestic violence and more. I went on to become a Community Trainer, a Team Lead and the Legal Program Specialist – screening and referring hundreds of clients for pro-bono legal services to partner agencies like the Northwest Justice Project, The Tenant Law Center, The Northwest Immigrant’s Rights Project and the WSBA Moderate Means Program. When COVID-19 struck Washington early this year, I helped the Washington 2-1-1 system step up to take on calls for The Washington Department of Public Health’s COVID-19 information line, and trained dozens of staff and volunteers around the state.

I am excited to now have the opportunity to attend Gonzaga University School of Law and I look forward to helping foster justice in every relationship I build with both my future clients and colleagues.