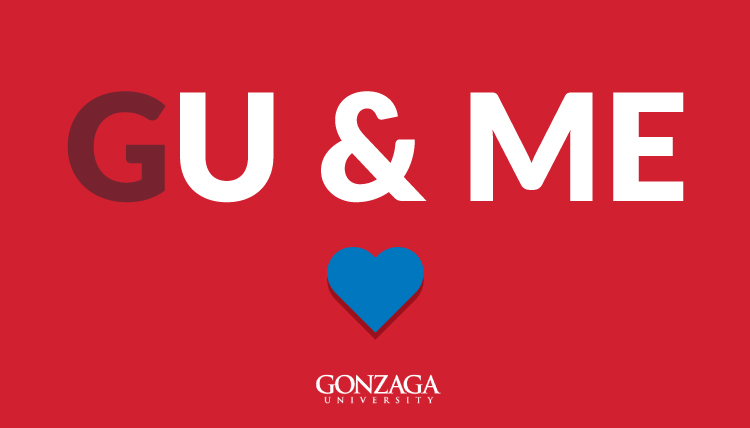 Want to share your own Alumni Love Story? Fill out the form to be featured on this page.

Send your future Zags to school with GU Valentines (or print some for yourself!) Printing instructions included.

Check out the most recent love stories from Zags!

Eric (Lane) and I met at the one and only — Jack and Dan's! Eric was back in Spokane working a Gonzaga Baseball Camp and I was just starting my senior year as a Zag. We got set up by a mutual friend, and after that night I knew he was pretty special. We dated for a few years and got married June 23rd, 2018 alongside all of our amazing Gonzaga friends! Eric is the head baseball coach at Lower Columbia College and I am a high school math teacher. We now have an Australian Shepherd JD, named after that famous bar where Eric stole my heart — Jack and Dan's. Go Zags!

In 1984 I met Mary Scooter O'Neill ’84 through mutual friend and asst volleyball coach Leslie Haskell, who awkwardly suggested Mary and I should train for Bloomsday together. We did, and I think it turned out OK for her. I invited Mary to play on my rec league volleyball team, and we seemed to bond well. In 1989 we were married on Pecarovich (baseball) Field here at GU, and we're still going strong after 30 years. In 2011 Mary underwent successful double-lung transplant surgery, showcasing her grit and our faith, as this GU community lifted us up. We have two kids, both Zags: Ben '16 and Brook '21, and we've truly been blessed by our GU community. Ben works at GU in Mission & Ministry, and Brook is a junior here. We're a four-Zag family. I was talking last night with our daughter, and she reminisced about growing up here, and basketball games in Martin Centre, and why would anyone want to leave this place. God bless this amazing Zag community. Zags for Life!

Will and Jenn met at Gonzaga Law School and starting dating their 3L year. Both knew it was something special, so Jenn (originally from Reno, NV) decided to stay a little longer than planned in Washington. She eventually convinced Will (a Seattle native) to come to the biggest little city where they had a beautiful wedding at Lake Tahoe surrounded by other Law Zags. They’re expecting a baby boy bulldog in May!

John and I were both civil engineering majors, but we met in English Literature class. He asked me if I could review one of his papers and I thought he was flirting with me. Turns out, he really did need help with his paper. But I think he liked me too.

Clayton and I met in pep band at a high school football game, my sophomore and his freshman year of high school. After annoyingly forcing my way into his life via homemade cookies, we began dating in December of 2013. I graduated high school in 2015 and started by new life as a Zag at the end of the summer. Clayton and I spent the next year taking turns driving the quick (5 hour) drive between Seattle and Spokane. Maybe it was because of Gonzaga's high reputation as a school, or for basketball, or because of some girl he knew that went there — but the following year, Clayton joined me at Gonzaga.

Four years of studying (three and a half for him), a semester spent traveling New Zealand, many nights spent tenting for basketball tickets, countless evenings spent convincing each other that one more hour of studying would be worth it, and an Engineering Degree and a Business Degree later, we will be getting married in April of 2020!