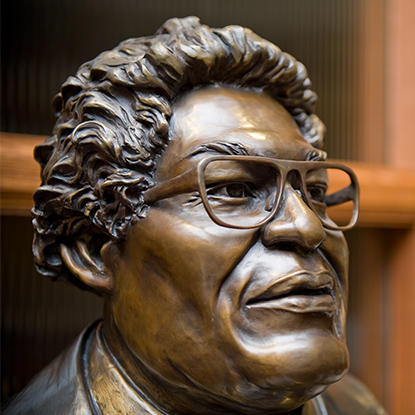 Carl Maxey was born in Tacoma, Washington in 1924 and was orphaned at the age of two. Born into poverty, he might never have progressed past his initial hardships. Instead, through his hard work and the mentorship by a Jesuit, Father Cornelius Byrne, at Sacred Heart Mission in DeSmet, Idaho, he became a giant in civil rights, law, sports, and politics.

Maxey attended Gonzaga Prep, where he excelled both academically and athletically. After graduation, from 1943-46, he served in the U.S. Army in World War II. He attended the University of Oregon from 1946-48 on a track scholarship. In 1948, he came to Gonzaga to pursue his law degree.

Maxey had a tall stature and intimidating presence mixed with unique talents as an athlete. In 1950, he won the national NCAA light heavyweight boxing championship title, ensuring Gonzaga's first NCAA team, and he remained undefeated in his collegiate boxing career. 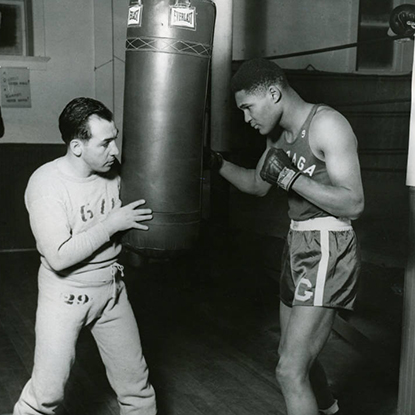 Carl Maxey with his coach, Joey August, as he trains with a punching bag in 1949.

After graduating from Gonzaga University School of Law in 1951, Carl Maxey began a 40-year professional career that would earn him a deserved reputation as an exceptional trial lawyer, a skilled counselor, and a nationally-recognized civil rights leader. He opened the Fredrickson, Maxey, Bell & Allison Law Firm in 1960, and while he built a highly successful private law practice, he continued to devote around 20 percent of his time to pro bono work. He later formed the Maxey Law Offices with his sons, William (’75 J.D.) and Bevan (’83 J.D.).

During the Freedom Summer of 1964, he volunteered in Mississippi to help blacks register to vote, freed black activists from jail and marched alongside Dr. Martin Luther King Jr. In addition, Carl helped members of the NAACP, specifically handling hundreds of pro-bono cases. He was appointed by five different U.S. presidents to serve as the chairman of the Washington State Advisory Commission to the U.S. Commission on Civil Rights. He had a singular impact on the advancement of equal rights in Spokane and throughout Washington State.

Maxey's unique contribution was recognized by his peers. In 1982 he received the William O. Douglas Bill of Rights Award, the highest award conferred by the Washington State Chapter of the American Civil Liberties Union. In 1988, the Legal Foundation of Washington presented him with the Charles A. Goldmark Award for his work promoting equal justice for all. In 1993, Gonzaga University School of Law conferred on Carl Maxey its highest award-the Gonzaga Law Medal.

Maxey passed away in 1997. Today, his legacy lives on through his many contributions to Spokane and the state of Washington. Maxey Law Offices continue to serve clients with Carl’s sons William ('75 J.D.) and Bevan ('83 J.D.) along with grandsons Morgan (’17 J.D.) and Mason (’20 J.D.) joining the practice.