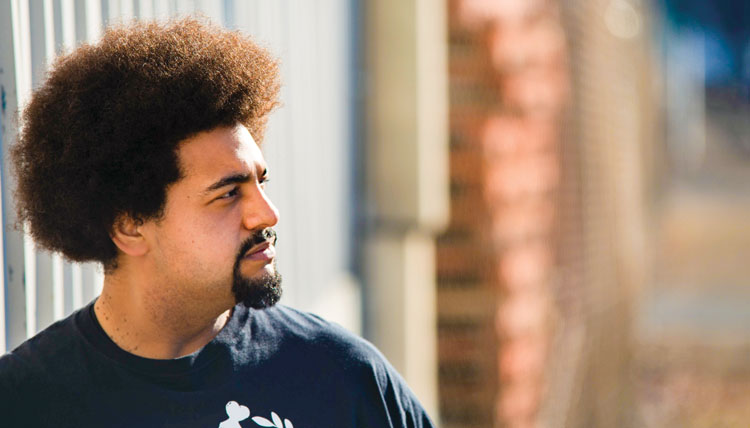 If ABBA’s “Take a Chance on Me” starts to wind through your head as you read about Sather Gowdy, don’t be too surprised. Gowdy, who graduated in May, is the first to admit that Gonzaga Law took a chance on him.

“I have been very open about my belief that GU Law took a chance on admitting me. My undergrad grades were certainly nothing special and my LSAT scores were unremarkably average,” he said. “I work incredibly hard, both in school and out of school, to honor the faith that Gonzaga placed in me.”

Gowdy grew up in north Spokane, the son of a Whitworth University English professor and a high school counselor. With his sights set on becoming a public defender, Gowdy applied to law school. “I will never forget the first time I set foot in here,” he recalled. “It was a few days before the start of my 1L year and I remember walking up the front steps and seeing the words ‘School of Law’ shimmering in the sunlight and feeling a wave of joy wash over me. I’m not sure that I’ve ever had as big of a smile on my face as I did in that moment.”

By his second year, the glow had dimmed. During the typical grind of 2L classes, two of Gowdy’s close friends died within weeks of each other. He suffered a “messy breakup,” and an inattentive driver totaled his car and temporarily damaged his spine. Gowdy plunged into a deep depression. “I’d wake up and just feel bitter, you know? And I’ve always been taught that you don’t want to be that person,” he said in a local newspaper interview. “You don’t want to be the person who’s always complaining about such, or treating the world like it’s against you.”

One day, Gowdy returned home from class and an elderly neighbor yelled from across the street, “Could you help me?” Gowdy helped unload the groceries in her trunk. He found 2019 GRADUATES out she was originally from Germany and the two talked about World War II — especially Winston Churchill, Gowdy’s hero — and they said their good-byes. “As I walked home, I realized my heart felt lighter for the first time in weeks,” he said. “I wondered if I could turn all the negative energy in my life into positive energy.”

He made a vow: Commit one act of kindness every day for someone in his community. Chores, yardwork, picking up trash, donating to the food bank. He understood the transformative power of helping another person and he didn’t want to stop — even if the help fell outside the traditional law student canon of public service opportunities. “You sometimes don’t get to choose how you’re needed,” he said.

This commitment has grown to official nonprofit status. Heal Spokane, Gowdy’s grassroots organization, promotes acts of kindness and goodwill to others in the Spokane community. In addition to community service acts, Gowdy speaks to businesses and schools throughout the region, inspiring others to lead with service. In November, Spokane Coeur d’Alene Living magazine recognized Gowdy as one of the “20 Under 40 Young Professionals” who are doing amazing things in their careers and in the community. The National Jurist named him 2019 Law Student of the Year. Before graduation, the Gonzaga School of Law staff and faculty awarded Gowdy the 2019 Holly Caudill Memorial Award for his commitment to service, leadership, and citizenship within the law school community while upholding high moral character.

If Gonzaga took a chance on Gowdy, then count Gonzaga the lucky one. The law school is thrilled to see Gowdy pursue his passion as he enters the next step of his journey.