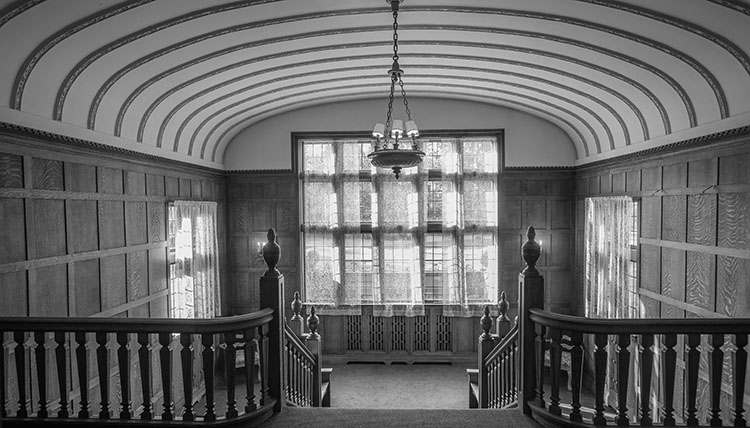 Gonzaga University's Bozarth Mansion and Retreat Center, which includes approximately nine acres, was purchased by the University in December 1963. The 23 room mansion and a number of smaller buildings were included in the $85,000 purchase price, as were a number of antique furnishings. Two small brick buildings located near the mansion were removed so that the University could constructs a 36 - bed dormitory-style facility (currently with 48 beds), thus making approximately 50 beds (currently 65 beds) available for religious retreats for Gonzaga students. The university purchased the Waikiki Mansion from a group of developers who had acquired the property and surrounding acreage in about 1960 from the estate of Mrs. Charles Marr. The syndicate developed the Fairwood homesites which adjoin the mansion. Construction of the dormitory and renovation of the carriage house for use as a meeting room/chapel, cost the University about $85,000.

The Bozarth Mansion and Retreat Center was originally known as " Waikiki". The mansion, which was designed by famed architect Kirkland K. Cutter, was constructed at a cost of approximately $100,000 in 1911-1913. The famed Olmstead Brothers of Boston designed the gardens and underground water system and the interiors were by Elsie de Wolfe, America's first well-known decorator. The home was built for J.P. Graves, whose father, John James Graves, was one of Spokane's early-day mining and railroad tycoons. J.P. Graves was the builder and president of the Inland Empire Traction Lines, one of Spokane's street car companies. However, one of Mr. Graves' principal businesses was his famous, 1,000 acre cattle and dairy ranch, Waikiki, on which the mansion was constructed. Newspaper accounts indicate he purchased the land for his ranch in about 1904. The ranch originally included the land on which Whitworth College is presently located. Graves was also a principal in the Country Homes Development Company, which, commencing in the 1920's, sold home sites in the area. (Note: Some accounts indicate Waikiki Ranch was 700 acres. The 1,000 acre figure is from a May 14, 1911, Spokesman-Review article.)

Waikiki Ranch is said to have had the largest herd of thoroughbred Jersey Cattle in the Pacific Coast region. The dairy was very well known throughout the world and breeding stock were shipped as far away as China.

There are two versions of the origin of the name, " Waikiki". The popular version is that when the Graves family visited Hawaii in 1920, their son was struck by the beauty of the area. He stated that it was the most beautiful place on earth but since the second most beautiful place was the Graves home on the Little Spokane River, he suggested it be called "Waikiki". However, a May 14, 1911, Spokesman-Review­ feature concerning construction of the English Tudor-style mansion refers to Waikiki Ranch, stating it was named by J.P. Graves himself following a trip to Hawaii. The Review article refers to "Waikiki" as an Indian word meaning "lots of rushing water". Since there were 24 natural springs on the farm, the paper continued, Graves thought it an appropriate name. The same Spokesman-Review article also reported that a construction camp had been established on the property for the 25-100 workmen who were engaged in construction of the mansion. The camp was complete with a bunkhouse, commissary and mess tent. Waikiki had its own water system, which included a storage system of 100,000 gallons, as well as its own hydro-electric system, which provided all of the electrical requirements. When the University purchased Waikiki, the original water supply system was still operational. However, major leaks were discovered in the old main supply pipes. As a consequence, the University converted to the Whitworth Water District supply.

It was reported that Graves wanted the mansion to have a joyous atmosphere, which influenced the Cutter design. The house has beautiful oak and maple floors, oak wall paneling throughout and handsome molded-plaster ceilings. When constructed, it had a commanding view of the Little Spokane River and the valley below. The one-piece carved alabaster light fixture is of exceptional size; leaded glass is found throughout. The huge fireplace features a carved dolphin splashing water into a basin in which pine trees grow - intended to help capture the "fun" Mr. Graves wanted in his mansion.

The original ornate wood and stone entrance to Waikiki, which is still located at Waikiki and Mill, is now the entrance to the Fairwood housing development. When the University acquired the mansion, one entered through the gate and traveled about a half-mile along the narrow road, which meandered through a rather heavily wooded area.

The Graves entertained many of the nation's financial leaders and even royalty. Prince Albert, later King Albert of Belgium, who had mining investments in the region, was a visitor as was James Hill of Great Northern fame.

In 1936, the mansion and remaining ranch property was sold to Mr. & Mrs. Charles E. Marr for $175,000. The Graves, who apparently also owned a home on Upper Terrace on Spokane's South Hill, moved to Pasadena, California. In 1983, Waikiki was renamed the Bozarth Mansion and Retreat Center in honor of Horace and Christine Bozarth who gave a substantial gift to renovate the mansion.** Mr. Bozarth, a former member of the University's Board of Regents, was a successful businessman and wheat rancher from Mansfield, Washington.

The Bozarth facility is heavily used, and greatly respected by hundreds of University students who come on weekends throughout the academic year. It is also used extensively for wedding receptions, socials, business retreats, and other various University events.

**Note: The available Waikiki/Bozarth history accounts, prepared by the late Arthur Dussault, S.J., do not reveal that the c. $200,000 Bozarth gift was also used to help repurchase the property from the Oregon Province of the Society of Jesus. In the early 1970's, during a rather dismal financial period in University history, Waikiki was traded to the Province in exchange for a number of Province-owned homes and lots located in and around the main University campus. The University rented Waikiki from the province until it was repurchased.