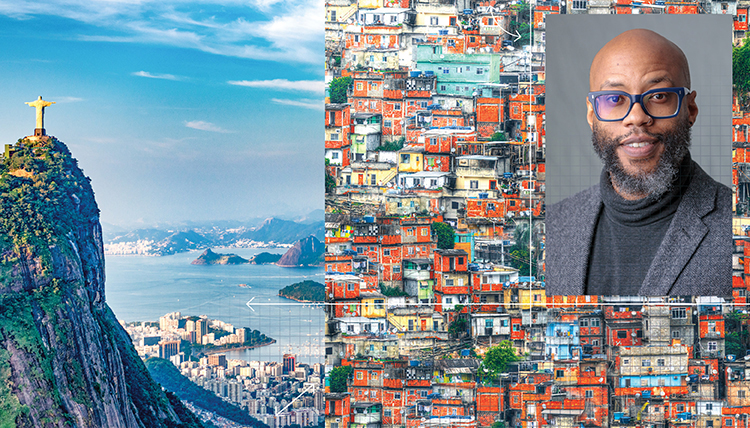 While copyright and intellectual property matters have informed much of Visiting Assistant Professor Jeffrey Omari’s career, his current research and scholarship examine internet governance. His most recent article, “Digital Access amongst the Marginalized: Democracy and Internet Governance in Rio de Janeiro” appears in PoLAR: Political and Legal Anthropology Review and is informed by 18 months of fieldwork conducted in São Paulo and Rio de Janeiro, Brazil. In this article, Omari combines ethnographic research with socio-legal analysis and commentary to examine the on-the-ground impact of Brazil’s recently enacted cyber law, the Marco Civil da Internet (Civil Rights Framework of the Internet; MCI). While this law provides “a right of Internet access” to all Brazilians, Omari contends that disjunctions in Brazil’s political landscape and democracy create corresponding disjunctions in the MCI’s pledge of internet access as a civil right.


In early 2015, while I was conducting fieldwork in Complexo da Maré — a favela in the North Zone of Rio de Janeiro, which lies far from the tourists and trendy beaches on the southern end of the city — a friend and resident of the community, Allyson, offered to show me around. Allyson is a slim, brown-skinned, 27-year-old musician who has lived with his family in Maré all his life. As a professional musician, Allyson is technologically savvy because he regularly uses computers, sophisticated software programs, and other forms of digital technology for his work. As Allyson and I walked casually through the favela during my first visit to Complexo da Maré, he mentioned that his landlord had just given him notice to vacate his apartment and that he would soon have to move. Allyson had other housing options in Maré and didn’t appear too concerned. He did seem somewhat amused, however, when he noted that his landlord had sent him the eviction notice via Facebook. Allyson told me, very sarcastically, that he found it ironic that his landlord was using the Internet ¬— the supposed tool for mitigating Brazil’s myriad inequalities — as the preferred platform for serving an eviction notice. Due to surging mobile phone use, Internet access in favelas like Maré has grown significantly in the last 5 years (Holston 2013; Patry 2014) and, according to Allyson, receiving these types of formal correspondences through informal social networks such as Facebook is becoming more common in favelas throughout Rio.

According to a 2011 United Nations report, the Internet “has become an indispensable tool for realizing a range of human rights” and, as Allyson’s Facebook notice suggests, it is also an indispensable tool in urban favelas. Indeed, for a range of underserved communities across the globe, the Internet is necessary for a variety of tasks that enable citizens to gainfully engage in civil society (van Schewick 2015). As legal scholar Barbara van Schewick notes, “now more than ever, Internet access is necessary to secure full participation in [a country’s] economy and democracy (2015, 7). In Brazil, the recent adoption of the MCI — the country’s “Internet Bill of Rights” — means that issues of Internet governance and digital access are now receiving the attention they deserve. However, to understand the MCI’s impact on the downtrodden, certain questions must be asked: What is Internet governance? How is it relevant to Brazil’s disadvantaged communities? And what political and legal factors influence the state’s reliance on digital access to promote a more democratic society?

Internet governance is a phrase that has gained traction in the global tech community in recent years. To the uninitiated, however, the term evokes uncertainty and even confusion. How can the Internet be governed when cyberspace is inherently open and transcends international boundaries? At the same time, countries are sovereign territories and have laws that must be respected. Science and technology studies scholar Laura DeNardis (2009) sheds light on these conflicting interests by suggesting that Internet governance involves a broadly conceived orientation that takes shape in four areas: critical Internet resources, intellectual property rights, communication rights, and security. Critical Internet resources relate to Internet Protocol address space and management. Intellectual property rights refer to ownership interests in trademarks, patents, and copyrights. Communication rights, conversely, involve freedom of speech, expression, and association, as well as privacy concerns. Meanwhile, because of the open and worldwide aspect of the Internet, DeNardis notes that security involves a wide variety of concerns including the “roles of national governments, the private sector, individual users, and technical communities” (DeNardis 2009, 19). Indeed, the Internet is not just a series of cables, protocols, and networks composed solely of material infrastructure; it has traditionally been an open and neutral network that represents an ideology about how the world works and how the world should work (Morozov 2013).

In 2007, Brazilian legal scholar Ronaldo Lemos (2007) wrote a powerful editorial that established the basis for Internet governance by arguing that lawmakers could not define crimes on the Internet in Brazil’s criminal code without acknowledging the corresponding rights and responsibilities of individual citizens, businesses, and governmental bodies. To develop this concept, Lemos and a team of researchers from the Center for Technology and Society at Fundação Getúlio Vargas Law School partnered with Brazil’s Ministry of Justice to begin drafting the legislation that would become the MCI. With the foresight to understand that legislating these complexities involves many actors and should be a participatory process, consultation for the original version of the MCI, which was sent for approval to the Brazilian Congress in 2011, included contributions from civil society, academics, Internet companies, and the tech sector. Internet users were allowed to make suggestions via tweets (Patry 2014, 11). Due to concerns from the copyright industry, which opposed the idea of court orders to take down infringing content, and opposition from telecom companies that opposed net neutrality, the bill lost steam for a few years. However, enacting the MCI was made a constitutional priority by the Brazilian government after Edward Snowden’s disclosures regarding U.S. espionage. Former President Dilma Rousseff harshly criticized this U.S. spying in a September 2013 address to the United Nations, calling it a breach of democracy and international law. In her speech, Rousseff demanded Internet regulation based on “open, multilateral and democratic governance, carried out with transparency by stimulating collective creativity and the participation of society, governments, and the private sector.” The MCI was enacted into law in April 2014.
--
U.N. Human Rights Council, “Report of the Special Rapporteur on the Promotion and Protection of the Right to Freedom of Opinion and Expression,” 85, U.N. Doc. A/HRC/17/27/ (May 16, 2011). Statement by former Brazilian President Dilma Rouseff, at the opening of the general debate of the 68th Session of the United Nations General Assembly, New York, September 24, 2013, http://gadebate.un.org/sites/default/files/gastatements/68/ BR_en.pdf.