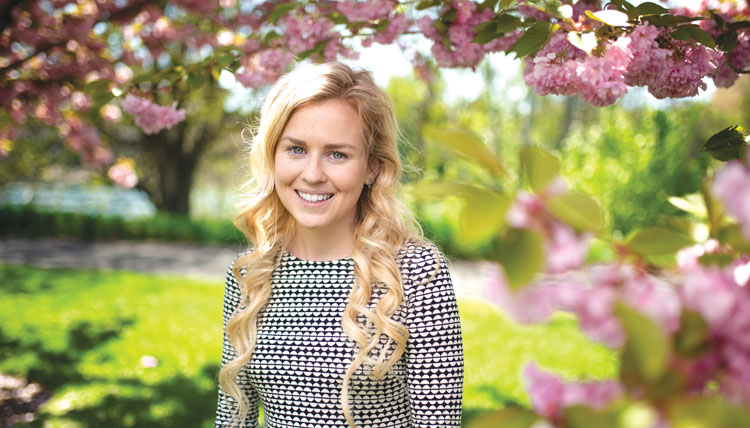 Emily Hazen decided to attend law school because she wanted to advocate on behalf of our country’s veterans who have been dismissed, disregarded, or forgotten by the U.S. military. Hazen said that “military sexual trauma, post-traumatic stress disorder, and traumatic brain injury are invisible illnesses that have visible repercussions for veterans, including substance abuse, suicidal ideation, incarcerations, and homelessness.”

She applied to Gonzaga Law to be a Thomas More Scholar and received the merit-based, full-tuition scholarship. She excelled academically at Gonzaga Law, earning nine CALI Excellence for the Future Awards and serving as the Gonzaga Law Review’s articles editor in her 3L year. She also won the 2019 YCC Phanor J. Eder Prize in Comparative Law from the American Society of Comparative Law for her article titled, “Restructuring UW Military Justice Through a Comparative Analysis of Israel Defense Forces.”

Hazen is not one to do things by halves. When gearing up for her walk in the 2019 Law School Commencement for her Juris Doctor, she had already earned her MBA from Gonzaga University in December 2018. Between classes, Hazen worked as Dean Jacob Rooksby’s research assistant and in the law school’s Federal Tax Clinic.

But it was the Thomas More Scholarship Program that gave Hazen the “space, direction, and support I needed to successfully advocate for veterans, particularly veterans of military sexual assault,” she explained. During her 1L summer, she interned with Protect Our Defenders in Washington, D.C, where she advocated on behalf of victims of military sexual assault. It was during this internship that she also shared with CBS This Morning her own story of assault while a cadet at the U.S. Air Force Academy.

Hazen was supposed to graduate in 2015 from the U.S. Air Force Academy, her dream since she was 7 years old, but was forced to leave because a fellow cadet sexually assaulted her during her freshman year and continued to harass, stalk, and threaten her. At Gonzaga, Hazen said that the “Thomas More Program and the law school community challenged me in a lot of ways, but ultimately they helped me rediscover my own strength.”

In her three years at Gonzaga Law, Hazen said that she has been challenged “intellectually, spiritually, and emotionally.” She explained that the “professors fostered a superior quality of education, which substantially improved my legal research and writing skills and challenged my implicit biases.” And it is not just the professors whom Hazen credits her personal and professional growth. “The students cultivated a learning environment which allowed all ideas and experiences to be expressed.” After graduation, Hazen will clerk for the Honorable Mitchell Brown of the Sixth District Court in Soda Springs, Idaho.