What’s in a Name?

The University is named after the sixteenth-century Italian Jesuit saint, Aloysius Gonzaga. A descendant of a noble Renaissance family and a page at the court of Francesco de Medici, Aloysius Gonzaga entered the Society of Jesus (the Jesuit order) in 1585. Later, while a seminarian in plague-stricken Rome, he attended to the sick and dying; as a result of his heroic service, he died of exhaustion on June 21, 1591, only twenty-three years old. He was declared the patron saint of youth in 1726.

Spokane and the Inland Northwest

Spokane, Washington and Coeur d'Alene, Idaho, form a flourishing metropolitan area with a population of approximately 722,000. This area offers many opportunities for work, service and relaxation for Gonzaga students.

Spokane boasts many parks, including the 100-acre Riverfront Park in the heart of the city. In addition, there are 21 public golf courses within an hour’s drive, ice- and roller-skating rinks, theaters, and art galleries. A symphony orchestra, civic theatre and professional athletic teams add to the cultural and entertainment opportunities of the urban core.

Nearby recreational areas are easily accessible to students. Seventy-six lakes and five ski areas provide swimming, water skiing and winter sports activities. Spokane has consistently been lauded for its quality of life.

Students: The Center of the University

Total enrollment each semester at Gonzaga is over 7,500 of which almost 70 percent are undergraduates and around 30 percent are in graduate programs, including the School of Law and four doctoral programs. Our student body are from nearly every state and over forty countries.

More than half of the undergraduate student body comes from homes at least 200 hundred miles from Spokane. The result is a diverse, welcoming campus community, where cultures and friendships are shared warmly.

The academic curriculum is supported by over 800 faculty. The ratio of students to faculty is 11-to-1.

Finance: An Important Part of Your Education

As you begin your academic career, it is important to remember that although tuition at independent or private universities is typically higher than at public universities, the ultimate value of a degree from Gonzaga University is well recognized by members of business and industry.

Gonzaga is committed to assisting students in financing their college education. Over 95% of our students receive financial aid. The Financial Aid Office welcomes your inquiries and is prepared to provide assistance in the development of your financial aid award, assuring you the best package possible.

The Campus: Your Home Away From Home

Gonzaga’s campus has grown from one building which housed both students and Jesuit faculty in its early years to 105 buildings spread over 152 landscaped acres. The University site is along the north bank of the Spokane River and includes its own small lake and an attractive, well-kept campus. Some highlights of the campus include the following:

The Department of Housing and Residence Life provides living options for around 3,000 undergraduate students, including men’s, women’s or coeducational residence halls with capacities ranging from 40 to 620. Residence halls are staffed by Professional, Graduate and Assistant Residence Directors, Resident Assistants, Resident Ministers, and Social Justice Peer Educators who collectively provide a large range of services as live in staff members.  Full-time unmarried first and second year students who are under age 21, not living at home, must live in on-campus residence facilities.  Upper-division students have access on a first come/first served basis to some apartment-style living units, and the University owns three apartment complexes and up to 12 houses in the neighborhood depending upon the year. At this point in time the university does not provide married or family housing in any on or off campus property, yet is happy to assist students in locating such.

John J. Hemmingson Center is over 167,000 square feet of contemporary space that supports a fun, healthy living and engaged community.  It is a living and learning environment where students, faculty, staff, alumni and members of the larger community can interact with one another.

Administrative offices within the building include:

The Charlotte Y. Martin Centre is the home of Gonzaga volleyball. The gym, which is the birthplace of the Kennel, seats 2,000 fans. As a whole, the Martin Centre is 136,000 square feet and houses the volleyball gym, but is also the location of athletic department offices and Diedrick & Delong Sports Medicine Center. The athletic training facility is a wonder on its own, covering nearly 5,000 square feet and featuring two state-of-the-art rehabilitation whirlpools.

The Rudolf Fitness Center is a 38,000 sq. ft. facility with cardiovascular and weight areas containing a full line of Olympic benches, dumbbells, Hammer Strength equipment, treadmills, elliptical machines, rowers, versaclimber, bikes, and steppers with 14 televisions. Also available are four racquetball courts, two aerobics rooms, a field house with three full basketball or volleyball courts, a (1/11 mile) rubberized running track, a six lane 25-yard swimming pool and a smoothie snack bar. The Rudolf Fitness Center also houses a majority of the physical education classes offered by the University and is open throughout the year for use by students, staff/faculty, and spouses.

The McCarthey Athletic Center is home to the Gonzaga men's and women's basketball teams as well as the Harry A. Green Indoor Rowing Facility. The facility, which features a 6,000-seat arena, is 144,000 square feet of screaming fans come basketball season and lives and breathes the legacy of past basketball greats, such as John Stockton.

Patterson Baseball Complex and Washington Trust Field became the home of Gonzaga baseball in the spring of 2007. The completion of the facility brought GU baseball back to the campus for the first time since 2003. The complex is named after benefactor and former Chairman of the Board of Trustees Mike Patterson, while Pete Stanton and Washington Trust Bank of Spokane were also major contributors.

Luger Field is home to Gonzaga’s Men’s and Women’s soccer programs. Phase I of the new facility was finished in fall 2008. Phase II of the facility was completed in the fall of 2015 with the addition of state of the art lighting which will allow our soccer teams to play their home games under the lights. The new facility provides not only a playing field, but a practice field for both the men's and women's teams as well as a press box and ticket booth. Phase III and IV will include the installation of permanent seating and a locker room for the home and visiting teams.

The Volkar Center for Athletic Achievement is a 51,240-square-foot facility built directly south of the Martin Centre, and helps student-athletes succeed in competition, in the classroom and in the community. The building houses the Rian G. Oliver Student Athlete Enrichment lab, The Karen Gaffney Champions room, The Steve Hertz Practice facility, Brown court, and the Hall of Honor presented by the Wolff Family, along with multiple meeting spaces. The building provides Gonzaga student-athletes with some of the finest facilities and support services in the nation.

The Gonzaga University Campus includes 105 buildings. Among these are several new buildings, including the new Hemmingson University Center which houses the Center for Global Engagement, the Mission & Ministry offices, the Center for Community Engagement, the Diversity, Inclusion, Community, and Equity (DICE) office, the Student Involvement and Leadership Center, student government offices, multiple meeting rooms and lounges, a US Bank branch, a ballroom, as well as multiple food venues.  Since 2000, fourteen other new buildings have been constructed, including the bookstore and parking facility; the Corkery and Kennedy Apartments; Coughlin, Dillon, Goller, and Twohy Residence Halls; the Law School; the McCarthey Athletic Center; the Paccar Center for Engineering; the Patterson Baseball Complex; and the Stevens Center for Tennis and Golf. The Rudolph Fitness Center was also added to the Martin Centre sports facility, and the Tilford Center for Nursing and Human Physiology, as well as Leadership Studies, was created from a purchased facility. The Magnuson Theater was also renovated during this time frame.

The Foley Center library was opened in the fall of 1992, providing sophisticated on-line computer access to libraries across the United States. It also contains one of the finest rare book rooms in the country.

Other new buildings as well as historic ones grace the Gonzaga campus. The Jundt Art Center and Museum was completed in 1995. The Jepson Center for the School of Business was remodeled and expanded in 2004.  The Rosauer School of Education building was completed in 1994. The historic Huetter Mansion was relocated to the University Campus and houses the Office of Campus Security and Public Safety, while the graceful 1902 Monaghan Mansion continues to house offices and practice rooms for the Music department. The Alumni Association along with the Division of University Advancement is now located in the BARC.

A new Performing Arts Center, the Myrtle Woldson Performing Arts Center, opened in the Spring of 2019 and a new integrated science and engineering facility is currently under construction. Additionally, the Volkar Center for Athletic Achievement as well as the new the Della Strada Jesuit residence have recently been completed. The former Jesuit House has been renovated into a new facility for the Humanities and contains a new office suite for the Dean of the College of Arts and Sciences, as well as offices for the Honors Program, Women and Gender Studies, the Center for Public Humanities, and the Center for Undergraduate Research and Creative Inquiry, as well as the Science in Action outreach program, English, and Religious Studies.

St. Aloysius Church, the Student Chapel, and the spires of St. Al’s Church are landmarks of the Spokane area. The chapel, located in College Hall, offers students a place for solitude and reflection as well as daily Masses.

A Century of Educational Leadership

After forty years of pioneer missionary efforts to bring Christian civilization and culture to the Pacific Northwest, the Rev. Joseph M. Cataldo, S.J., an Italian Jesuit missionary, initiated plans to build a mission school in Spokane Falls Territory. Out of the vision and courage of early Jesuits, Gonzaga College became a reality and admitted its first students in 1887, two years before Washington became a state.

Accreditation: The Mark of Excellence

Gonzaga University is accredited by the Northwest Commission on Colleges and Universities (NWCCU), an institutional accrediting body recognized by the Secretary of the U.S. Department of Education. Gonzaga University holds specialized accreditations for specific degree programs through:

GU Coat of Arms - The University Seal: The Mark of Distinction 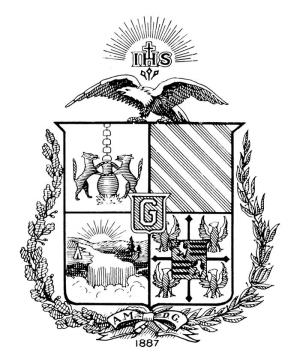 The Coat of Arms of Gonzaga University was assembled in 1914 is an adaptation of the coat of arms of the Loyola family, members of the Spanish nobility from whom the founder of the Society of Jesus descended. It combines symbols representing both the paternal and the maternal houses, Loyola and Onaz. The Coat of Arms contains:

Our Commitment to Non-Discrimination

Gonzaga University subscribes to the principles and laws of the federal government and Washington State pertaining to civil rights and equal opportunity. The university does not discriminate against any person on the basis of race, color, religion, national origin, sex, marital status, sexual orientation, gender identity, age, disability, protected veteran status, or any other non-merit factor in employment, educational program, or activities that it operates. All university policies, practices, and procedures are consistent with Gonzaga’s Catholic, Jesuit identity and Mission Statement.

As a church-related institution, in conformity with federal and state law, Gonzaga reserves the right to take religious faith into consideration where it is deemed appropriate. As a federal contractor, Gonzaga University maintains an Affirmative Action Plan.