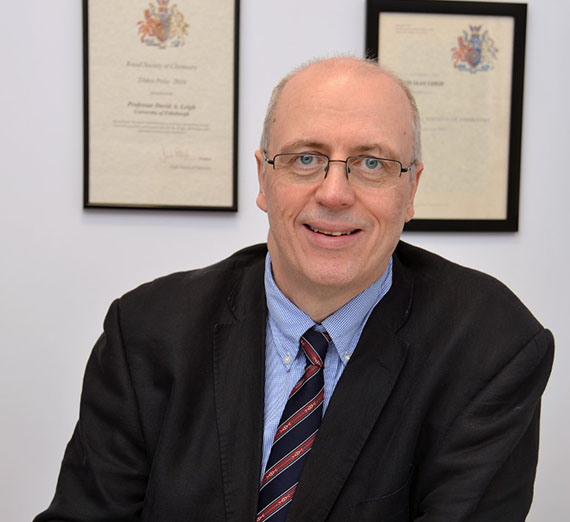 The lecture series is presented by the GU science departments in honor of the late Father Timothy O’Leary, S.J., devoted priest and chemistry professor at Gonzaga University.

In this lecture, Professor David Leigh will discuss recent progress in the synthesis of molecular-level machines and motors, which will be the forerunners of a new technological era of molecular robotics. “Molecular-level machines lie at the heart of every significant biological process. Over billions of years of evolution, nature has not repeatedly chosen this solution for achieving complex task performance without good reason. In stark contrast to biology, none of mankind’s fantastic myriad of present-day technologies exploit controlled molecular-level motion in any way at all: every catalyst, every material, every plastic, every pharmaceutical, every chemical reagent, all function exclusively through their static or equilibrium dynamic properties. When we learn how to build artificial structures that can control and exploit molecular level motion, and interface their effects directly with other molecular-level substructures and the outside world, it will potentially impact on every aspect of functional molecule and materials design. An improved understanding of physics and biology will surely follow."

In this lecture, Professor Leigh will present the art and science of molecular knots. Knots are important structural features in DNA and some proteins, and play a significant role in the physical properties of both natural and synthetic polymers. Although billions of prime knots are known to mathematics, few have been achieved through chemical synthesis. Dr. Leigh will discuss the latest progress from his laboratory, including the synthesis of some of the most complex molecular knots and links (catenanes) to date and the introduction of molecular weaving.

Professor David Leigh received his Ph.D. from the University of Sheffield (UK) under the supervision of Dr. (now Sir) J. Fraser Stoddart. He is the Sir Samuel Hall Chair of Chemistry at the University of Manchester, where he is a Royal Society Research Professor. Dr. Leigh is a Fellow of the Royal Society and a Fellow of the Royal Society of Chemistry. He is a world leader in the fields of molecular nanotopology (the art of making the world’s smallest knots and links) and synthetic molecular machines. Landmark achievements of his lab include the first synthetic Brownian ratchet molecular motors (2003), synthetic molecular machines able to perform macroscopic work (2005), the invention of catalytic routes to rotaxanes, catenanes and knots, and the first molecular weaving (2020).