Bite Not One Another

Assistant Professor of English Jeff Dodd shares reflections on his experiences as a faculty adviser for Mission: Possible.

Well before dawn, bleary eyes from all corners of campus and the Logan Neighborhood slowly emerge from the darkness and congregate in the dim light of DeSmet Circle.

While some Zags spend the first Saturday of Spring Break preparing for WCC games and others reunite with loved ones, this has become a ritual for me over the last 10 years: Wake at 3 a.m., grab a bag with the bare essentials for a week in uncertain housing accommodations, and make my way to DeSmet Circle to meet others for a journey to one of several destinations around the country.

Mission: Possible, an alternative Spring Break immersion trip led by Gonzaga’s Center for Community Engagement, sends students to experience a variety of social justice programs in other cities. I have had the privilege of accompanying students to Denver; Neah Bay, Washington; St. Louis; and, most recently, Chicago. While the work is characterized by the shorthanded “service,” and while most Mission: Possible groups do provide some direct service, these trips are best understood as co-curricular immersive learning experiences.

One way to know what I and the students gain from these trips is summarized in a passage from Frederick Buechner’s “The Sacred Journey”: “The story of any one of us is in some measure the story of us all.” I return to that passage often as I reflect on the many experiences I’ve had on Mission: Possible trips.

Working with Mei, a Burmese mother resettled in Denver, who in one moment role-plays tentatively how she might use English to tell a supervisor that she is sick, and in another proudly reels off the months of the year for the first time, we see a necessary, if imperfect, refugee resettlement system as part of the story of who we are as nation. And we are able to develop the empathy and intellect to explore how our contributions to, and advocacy for, such systems are instrumental to a just and equitable world.

In Neah Bay, at the Makah Cultural and Research Center, a local college student passionate about maintaining his culture’s history and language helps us understand more about our own complicity in the many made and broken treaties that have allowed our federal government to exploit the knowledge and natural resources of our Native communities while constraining their rights to self-determination. And that story becomes more personal when we examine the history of our own campus, built on the ancestral lands of the Spokane Tribe. We share that story more deeply when, a week after we return to Spokane, we receive news that the inspiring young Makah leader we had begun to know had been swept away by a wave, and with him one more beacon of hope for his community.

In a garden in St. Louis, Rosie tells us about her life in a north side neighborhood cut off from white prosperity and wealth by four lanes of asphalt. On her side of the Delmar divide, homes are burned out and then scavenged for bricks that can be resold; on Rosie’s side of Delmar, no family is immune from the effects of gun violence; Rosie’s side knows too well that federal housing policies and redlining have led to generations of white flight and seemingly insurmountable poverty. Her story becomes a bit of our story when we invite her to join us for dinner and she describes her passion for storytelling. She shares a kind of allegory about humility and unseen gifts, and relays the plot of the children’s book she has written. Our stories weave a bit more tightly when we are invited to consider the legacy of federally sanctioned housing segregation and restrictive covenants that are still on the books in many communities, including Spokane.

In Chicago, students and I learned stories of gun violence and the trauma imposed by constant threat from gangs and from military-style policing of largely black and brown neighborhoods. We learned about the work of community leaders invested in, and investing in, rebuilding the relationships in their city. At Precious Blood Ministry of Reconciliation we participated in a peace circle with a young man who spent two decades in prison. From mothers whose sons were killed and mothers whose sons were taken away, we learned how our carceral system rooted in slavery disproportionately penalizes people of color. And, we learned firsthand the power of trauma-informed care to heal relationships and restore young people to communities. 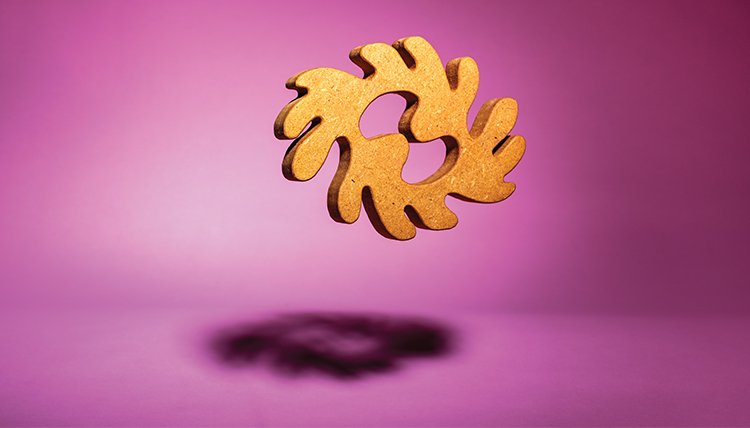 Ghanaian adinkra symbol called bi nka bi, a symbol of two fish biting one another’s tails, which roughly translates as 'bite not one another.'"

As we sat in the organization’s bustling south side headquarters, we passed our talking piece to the left after sharing some bit of our story. I instantly recognized the talking piece as a wooden carving of a Ghanaian adinkra symbol called bi nka bi, a symbol of two fish biting one another’s tails, which roughly translates as “bite not one another.” Adinkra trace back at least to the 17th century, and have been used to mourn and commemorate the values most fundamental to the ancestors who have passed on. Bi nka bi reminds us of the importance of peace and harmony. It also reminds us that the stories we learn, and the stories we share, are in some measure the stories that will bind us together in a mutual embrace of healing, justice, and care for one another.

Each year, I return from Mission: Possible exhausted from seven straight days of constant emotional and intellectual stimulation, to say nothing of the energy that a week with a dozen 18- to 22-year-olds demand. My spouse hands off our two small kids she’s cared for all week. I begin almost immediately to think about Monday morning classes and the grading I didn’t get done over the break. And then, some small bit of story comes to mind, and I wonder what the next predawn trip to DeSmet Circle will hold.

Submit your own story to us!
Email the Editor
Share Story