Encounters on a Corner in East St. Louis

Andrew served as a staff advisor for 10 students spending their Spring Break on a Mission:Possible immersion trip in St. Louis. Working with organizations such as Gateway 180, Campus Kitchens at St. Louis University and North Grand Neighborhood Services, the team witnessed the injustices of homelessness and race, and learned more about the daily impact of these systemic issues.

On our last day in St. Louis, we had the privilege of serving alongside Miss Paulyn and her street outreach team. This was the culmination of all of the work we had done: A time for direct service; a chance to interact with people who had been forgotten, learn their stories and show them that they had infinite worth in our eyes. It was also selfish: An opportunity for us to see immediate emotions, and the gratification that came bulldozing to the front. We were people who thrived on the interaction with others and the ability to listen. We loved and valued the work that we had done up to that point, but we yearned for that next step.

After spending the morning taking mattresses to church members, making seed packs, assembling care packs (socks, toothbrushes, tooth paste, deodorant and wipes) and food packs (sandwiches, water, cookies and a handwritten card), we crammed into the three minivans and followed Miss Paulyn into the heart of East St. Louis. Our first stop was a convenience store on the corner. As soon as Miss Paulyn’s van entered the lot, everyone recognized her and started jumping and waving, their elation and adoration for her immediately palpable. We quickly parked and hopped out of the vans, grabbing bags and some bouquets of flowers. Morgan, Hailey and I turned to Desmond, a man standing on the corner with a cross around his neck, a blue bandana holding back his flowing dreadlocks, a half-smoked cigarette hanging from his lips and a pair of deep, longing eyes. Longing for someone to see him, longing to share himself with someone, longing to get back home to his children. When Hailey handed him a pink bouquet of flowers, he turned to Miss Paulyn and back at Hailey, then looked up to the cloudy skies and said, “Lord, you’re really looking down on me aren’t you?” He immediately embraced all of us and began sharing his story – a story of loss and grace. The encounter stayed with me for the remainder of the day. 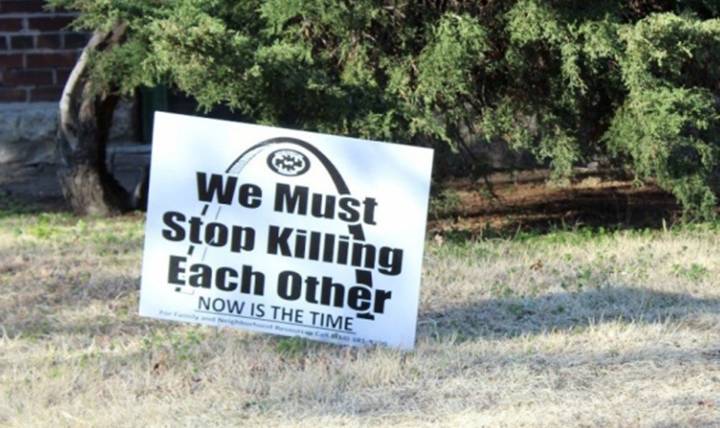 Soon, we delved deeper into the world that is East St. Louis, a contemplative pilgrimage for us to reflect on where we had been during the week, where we were going and what we could do when there. We learned the history of East St. Louis and gained new insights into Miss Paulyn’s work, and we were exposed to homelessness and race in challenging ways. We also witnessed the resiliency we had heard so much about, and the community ties among East St. Louis residents who have been to hell and back, and continually hold each other up.

It became blatantly obvious when we said goodbye to Miss Paulyn. A group of white, middle-class students from Spokane, we stuck out like a sore thumb. A shiny new black Chevy Impala pulled up and an African American man stepped out.

Wearing a St. Louis ball cap and a smile, he asked, “What are y’all doing here?”

He likely was looking for an answer that would explain the huddle of tearful, solemn and hopeful young people gathered around a 76-year-old saint-like woman. We laughed nervously; nobody had a cumulative, coherent response to explain how we ended up in that moment.

“My name is Corey, Corey McCoy,” the driver said. “I had to stop cause I ain’t ever seen a group of white people this big in this neighborhood before. I grew up down the street, my grandmamma lived here.  And every time I come through town, I stop to remind myself of my roots.”

He continued, “Her house is burnt down now, but it is a great reminder to stay grounded. I just felt that I needed to stop and share and tell y’all that we all think the same. Sometimes y’all gotta test your blood and see where you come from. I come from here. But it might surprise you that we’re all the same. We think the same, we the same.”

We stood silently listening to Corey, enthralled with his message and pained by the fact that he felt the need to stop, to tell a group of white individuals that we are all the same, and challenge us to go forth and share this glaringly obvious belief with others. Corey worked his way around the group, shaking hands and giving hugs, integrating himself into our goodbyes like he had been with us the whole time.  And in some way, he had been. He had been there in our discussions and struggles throughout our experience in St. Louis.

As we prepared to leave, he said “I hope that if y’all ever see a group of color this size in your neighborhood, you would feel the need to stop and get to know them, too.” After a picture with Miss Paulyn, Corey got back into his Impala, waved goodbye and headed back into the stream of his everyday life. His time with us was incredibly short, but his long-term impact on us was only beginning. Just like this week in St. Louis.