More Than a Season, Debut Production is Model of Creative Collaboration

Opening night of any original production on the live stage is a moment to behold. For Gonzaga University’s dance, music and theatre departments, the premiere at its new Myrtle Woldson Performing Arts Center showcases not just an exceptional facility, but also remarkable creativity and collaboration.

What will happen when the curtain rises for the first time at the Woldson is the showcase of a product three years in the making. It began when Elisabeth Mermann-Jozwiak, dean of Gonzaga’s College of Arts and Sciences, asked how the directors of dance, music and theatre would craft an opening that would represent as many art forms as possible without creating a variety show. Further, how would such a performance showcase the region as a whole, Spokane specifically, and even the personality of the late Miss Woldson, whose name the building bears?

Creating such an epic piece, fit to surprise and delight, entertain and inspire, would require the collective genius of seasoned professionals – not merely performers, but engineers of the stage experience.

Fortunately, the College had the necessary experts on hand. Kathleen Jeffs, chair of theatre and dance, is Oxford-trained. Suzanne Ostersmith, director of dance, developed Gonzaga’s program from scratch 20 years ago. Timothy Westerhaus, chair of music, has conducted choral ensembles on five continents.

The trio spent a year listening to music scores, classic and modern, dramatic and simple. And then, they discovered “A Time to Dance,” a 2012 composition by Alec Roth. Built on four movements that reflect the seasons, it provides ample opportunity to showcase the unique talents of both vocalists and instrumentalists.

Even though the composition’s title was befitting of Ostersmith’s expertise in dance, for this occasion, she would be the director of the whole collaborative effort, explains Jeffs. “She transformed a piece of music inspired by dance into a custom-built piece for this particular moment in Gonzaga history.”

And thus, the team agreed on naming their interpretation of Roth’s work “A New Season.”

With the title nailed and Roth’s rhythmic depiction of nature’s cyclical moods orchestrated, what would the rest of “A New Season” entail? How would Ostersmith develop a central story to feature not only musicians and dancers but actors and poets?

“We wanted it to be all about artistry, place and potential,” says Ostersmith. “We began diving in to get poetry from local poets, and found a dozen that would work for the seasons from the perspective of the Inland Northwest.”

All in all, the storyline Ostersmith created will unfold in 26 songs and 12 poems by three dance ensembles, an acting ensemble, 63 choral members and 31 musicians. In addition to the performers, other specialists have roles in showcasing the moods of the region. Courtney Smith is a master of scenic, projection and lighting. Leslie Stamoolis, costume designer, crafted the apparel for 150 looks and even designed a piece reflective of the style benefactor Miss Woldson once wore to the San Francisco opera.

Read more about the costumes in “The Fabric of ‘A New Season’.”
“It required a coherent vision for this all to come together,” says Jeffs. “I really admire the magnitude of participation made possible by (Ostersmith’s) galvanizing vision and the capacities of the new building. The number of students involved is staggering.”
Westerhaus is quick to note that the collaboration taking shape with “A New Season” is not just among his colleagues in the performing arts. “There has been great interdisciplinary collaboration,” he says, “plus great integration of faculty and staff in the orchestra side by side with students and even some professionals from the community.”

The enlarged scope was possible because of the new performing arts center, designed to seat 750 people.

“We’re creating a new paradigm for how we collaborate because we have the space to do it,” says Westerhaus.

Ostersmith adds, “Even six years ago, when theatre and dance became stand-alone departments, this would have been difficult to imagine. In my 20 years here, nothing of this size has been possible.”

The addition of poetry to the mix is new as well. Charlie Pepiton, associate professor of theatre, has provided vocal coaching for the actors who, instead of performing traditional dialogue or monologue scripts, will perform in a spoken-word, poetry-slam presentation. It’s familiar to some – like Spokane poet Bethany Montgomery of Power 2 the Poetry – and new to others.

“That’s another beautiful feature – the new voices, side by side with the established,” says Jeffs. “For the students who embody those voices, there’s an educational moment there. They’re developing a performance skill that extends beyond the show.”

Everything about developing “A New Season” was different – even the auditioning processes for the dancers and vocalists. For choral members, that meant learning songs in advance and coming in understanding professional expectations. It was similar with dance: Students had to learn choreography individually and come to group rehearsal having already memorized the moves.

In the theatre space, Jeffs’ crew is experimenting more with projection tools and training technicians for this next level of visual performance.

Together, they have “felt a healthy rhythm,” says Westerhaus, who adds that the team’s open communication is matched only by their “sincere respect for one another’s artistry.”

Working on “A New Season,” he adds, “has redefined how we collaborate: This is the only way to move forward. It opens up so much possibility for students to learn from one another.”


“Collaboration” and “interdisciplinary” are increasingly considered buzz words among college departments, but Jeffs believes they are more. “The messiness of it requires effort and grit. Seeing that pay off in the student leads to greater things in the future.”

“It’s about being patient with the process and trusting one another from this spirit of shared vision, and letting each door open,” says Westerhaus. “It has been a really magical part of the process.”

The example set by the performing arts leadership trio is noted among others. Colleagues at Gonzaga, for sure, but also peers from other institutions. The collaborative model was even noted by accreditors visiting the music department recently, as Westerhaus explained the make-up of his students. “We’re not a music conservatory or a dance school,” he said. “My students are engineers and educators, nurses and accountants.”

Theatre colleagues have told Jeffs of their envy for the biennial 10-minute play festivals she developed with Pepiton. “The way ours runs so collegially is special. We play very well with other colleagues. I don’t think other schools are as supported in their infrastructure to be this way. Our dean has really supported our interdisciplinary work and paved the way for growth to occur.”

Following the opening of the Myrtle Woldson Performing Arts Center, and its first run of usual student productions, it’s unlikely Gonzaga’s level of collaboration will remain a secret. Like the building itself, the arts programs are building on a legacy and forever looking to the horizon with great intent and purpose.

This production isn’t just about new and old coming together, or the predictable seasons of life, or the beauty of the Gonzaga region. It isn’t even about the incredible dreams of three creative directors working together. No, as “A Time to Dance” morphed into “A New Season,” it was always about Spokane in its fullness, including a provocative message about acceptance and inclusivity and how the community faces challenges in order to achieve its potential.

“What I get from ‘A Time to Dance’ is the sense of being present, of loving the moment,” Westerhaus says. “In that is a spirit of compassion, kindness and love – that’s in line with our mission commitment.”

“A New Season,” says Westerhaus, “allows the Gonzaga voice to come through.

And that, says Jeffs, is “the beauty of Suzanne’s vision in taking this project from the genesis of a new idea to full realization and orchestration of all the moving pieces.” 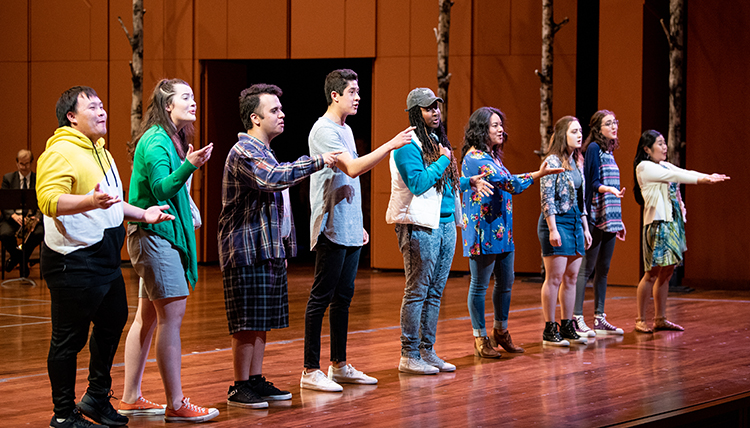 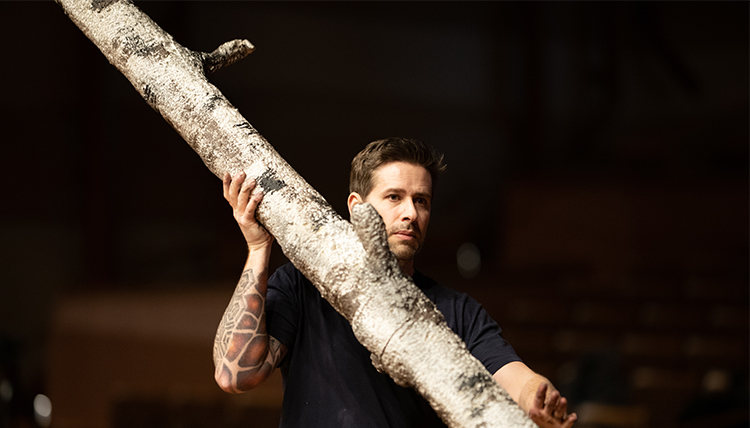 Size: 58,000 square-feet on two stories
Cost: $30 million
Mainstage Theatre: 759 seats (595 on the orchestra level, 164 in the balcony and side boxes)
Recital Hall: 168 seats in a more intimate space with variable acoustics

Special Features: The stage features a proscenium arch and a fly loft. The orchestra pit can rise to create a “thrust” stage area or descend for an orchestra during a musical or dance production. On the second floor is an interdisciplinary arts design studio.

The Benefactor: Miss Myrtle Woldson was a life-long Spokane resident who invested in real estate locally and in Seattle. Upon her passing in 2014 at the age of 104, Miss Woldson bequeathed her estate to Gonzaga University to support the performing arts and to provide scholarships for students with financial need.

The Myrtle Woldson Collection, adjacent to the center’s second-floor lobby, pays tribute to Miss Woldson and inspires students and visitors to pursue self-empowerment. The museum-like series of spaces includes narrative panels and multimedia displays celebrating Miss Woldson's life, entrepreneurship, and philanthropy. The Collection will be open to the public Monday through Friday, 8 a.m. to 5 p.m. (starting April 17) in addition to performance days and times.

Location: 211 E. DeSmet (corner of Pearl and DeSmet)
Parking: Street parking on Sharp, DeSmet, Boone and others is free but limited; Passenger drop off is permitted at the entrance at Pearl and DeSmet. Public parking in campus lots is available after 5 p.m. for free. (All lots and spaces marked with a yellow “Y” are reserved at all times for campus residents with parking permits.) 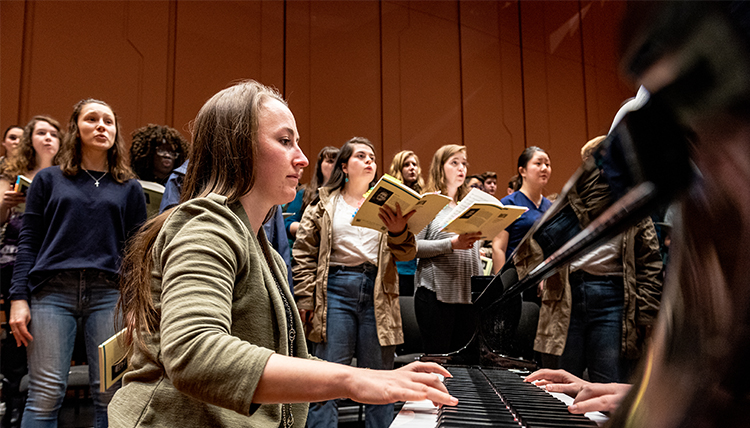 Read about the April 11 dedication of the building here.

The performance hall adjacent to College Hall, which has been home to Gonzaga theatre productions for 50 years, will continue to be used for faculty-directed productions and student-led work where a more intimate setting is ideal. Formerly named for the Russell family, this facility was renamed in 2008 for Harry F. and Colleen B. Magnuson, friends of the university.

More Than a Season, Debut Production is Model of Creative Collaboration