Medical Simulation Handiwork Just Might Have You in Stitches

Cara Smith might be the most ingenious member of the nursing department. Thinking there had to be a better way to teach suturing to graduate nurse practitioner students and suture removal to undergrad BSNs, she went to Hollywood for the answer.

Knowing that practicing suturing on chicken legs wasn’t the most sanitary, economical, ecologically sound or realistic method to teach stiches, Smith, Gonzaga’s simulations operation specialist, found a company that crafts things for the movie industry. She found a section on its website for medical simulation.

Smith watched an online video that taught her how to make her own suture pads for about a third of the cost of buying premade pads. “It was a matter of trial and error,” Smith says. “I made several samples. David Peck, the nurse practitioner faculty who teaches suturing to the graduate students, tried out several of my samples to see which combination worked the best. These are much more realistic than suturing chicken legs.”

“I took things we had in house and created a more realistic simulation of skin than what we got with the chicken legs, and there’s no mess or waste. I have perfected it and ordered a mold. Now I can make them much more efficiently,” she says. 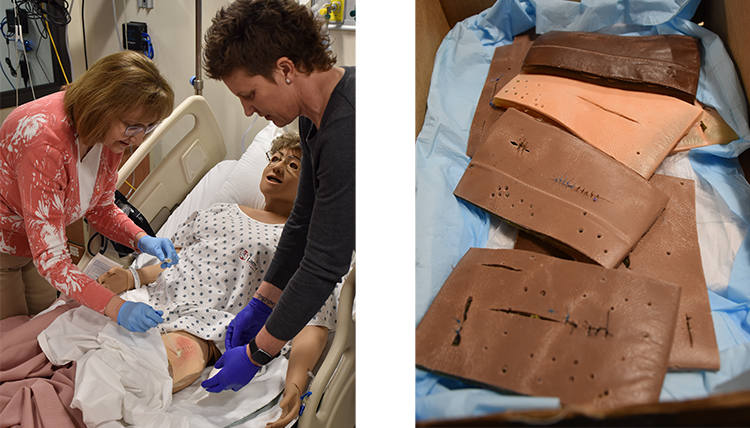 Susan Edwards and Cara Smith show off an infection pad on Simulation Annie that Smith developed, complete with "ooze."

Susan Edwards, director of nursing’s Simulation Labs, is like a proud mother when boasting about some of the medical simulations Smith has developed.

“Cara also made an infection pad, complete with a pus pocket that oozes upon pressure, made with lotion and fake urine, which Smith also concocts,” Edwards says.

“She is adept at making bruises and chicken pox with bubble wrap, makeup and clear dressings, and simulating edema in the manikins’ legs with mattress-top memory foam.”

In addition to these new simulations, Smith has taken what has been used for other simulations and made them better, Edwards says.

A fingertip fits over the finger of a simulation manikin and is filled with fake blood. Students can prick the manikin’s finger and get true blood-sugar readings.

She makes urine samples of different colors, each representing specific characteristics of urine color in the body.

“Cara recently made a fake stool out of peanut butter, using iodine to replicate blood in the stool. With the fake stools, nursing students learn how to properly clean a patient who has had an unexpected bowel movement,” Edwards explains.

Smith can represent a hemorrhage with cherry pie filling that simulates blood clots. “It is so important students have a realistic simulation of what they are being taught,” Edwards says.

Smith is always thinking outside the box.

Edwards, who also is director of the Bachelor of Nursing in Science program, has taught at Gonzaga 10 years. Smith was a longtime radiology technician before joining Gonzaga two years ago.

“All of these ideas of moulage and the ingenuity that Susan and the nurse practitioner faculty have implemented for years has provided me with a great building block,” Smith says. “I have embraced new ideas and brought other options to the table as I learn more about techniques that add realism to our simulations and lab practices.”

“Working together we have always tried to raise the bar for the benefit of our students,” Edward adds.

And no doubt, have some fun with their medical arts and crafts.