Gloria Nevarez serves as the fourth full-time commissioner in the 66-year history of the West Coast Conference and is one of nine female conference commissioners currently serving in Division I Athletics. She is also the first Latin American to ascend to the commissioner's chair in Division I.

Nevarez received her Juris Doctor from the University of California. She began her athletics administrative career at San Jose State University, where she was the first full-time director of compliance in school history and developed and implemented an NCAA compliance program.

Nevarez has served in multiple roles in athletics administration and compliance, including at the University of California and the University of Oklahoma. She was the senior associate commissioner, senior woman administrator at the Pac-12 Conference, where she was instrumental in league expansion, the creation and operation of the Pac-12 Networks, the development of international initiatives, and advanced the conference’s sustainability efforts.

Since becoming commissioner at WCC, Nevarez has shaped nearly every facet of the internal and external operations of the conference. In the last two years, she has directed significant overhauls to the conference’s branding, expanding the league’s national television contracts, adding a long-term title sponsor for the men’s and women’s basketball tournaments, and launching groundbreaking social justice initiatives. She represents the conference on national policy issues and advises WCC presidents on current issues such as NCAA policy development on name, image, and likeness, the evolving transfer rules, and social justice initiatives.

Under Nevarez’s leadership, the WCC became the first Division I conference to adopt a diversity hiring initiative, the groundbreaking “Russell Rule” adopted in July 2020. All WCC schools are required to include a member of a traditionally underrepresented community in the final candidate pool for every athletic director, senior administrator, head coach, and full-time assistant coaching search. 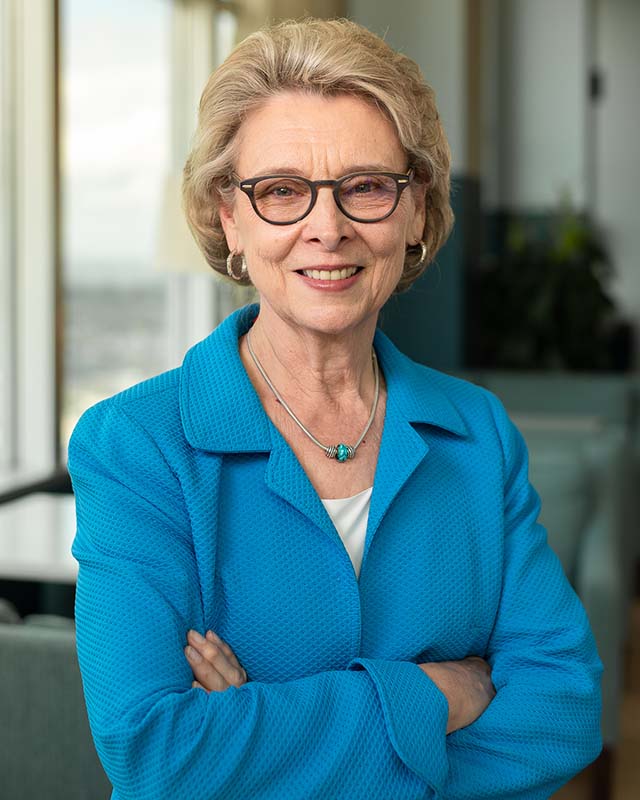 Christine Gregoire (’77) is the CEO for Challenge Seattle and the former governor of the State of Washington.

Raised in Auburn, Wash., Gregoire attended the University of Washington in Seattle before moving to Spokane to pursue her law degree at Gonzaga Law. Upon graduation, she became an assistant attorney general in the Washington State Attorney General’s office. She went on to serve four years as the director of the State Department of Ecology. In 1992, Gregoire was elected as attorney general for the state, a position she held for three terms.

In 2005, Gregoire became the 22nd governor of the State of Washington and the state’s second female governor. She served two terms through 2013. During her first term as governor, Gregoire created the Department of Early Learning and led reforms to the K-12 system and investment in higher education. She led the state in a historical investment in infrastructure, including the building of the largest floating bridge in the world and the largest transportation tunnel to open Seattle's waterfront. Gregoire also led a historic number of trade missions, reformed the foster care system, and was among the first to lead in health care reform.

During her second term, Gregoire led the state in significant reforms, management, and budgeting to position the state as one of the most financially secure to come out of the "Great Recession". In her current role as CEO of Challenge Seattle, Gregoire leads an alliance of CEOs from 21 of the region’s largest private-sector employers who work together to ensure the greater Seattle area continues to thrive as one of the most vibrant, innovative, and globally competitive regions in the world. She is also a member and former chair of the Fred Hutch Cancer Research Center and a member of the National Bipartisan Governor’s Council.

Gregoire has been married to her husband Mike for over forty years. They have two children, Courtney and Michelle, and four grandchildren.

Gonzaga Law Commencement will take place on Saturday, May 7 from 9-10:30 AM. Visit gonzaga.edu/commencement for full details.
Share Story

As part of the May 2021 commencement exercises, Gonzaga University School of Law awarded its highest honor, the Law Medal, to Mike McGrath, a member of the Class of 1975 and currently the honorable Chief Justice of the Montana Supreme Court.

As first-year students in 2011, the graduates were asked to read Fr. Boyle’s inspiring best-seller “Tattoos on the Heart: The Power of Boundless Compassion.” Fr. Boyle stirred the class again at commencement May 10.

See all the best moments from Commencement 2018 in our Photo Galleries.