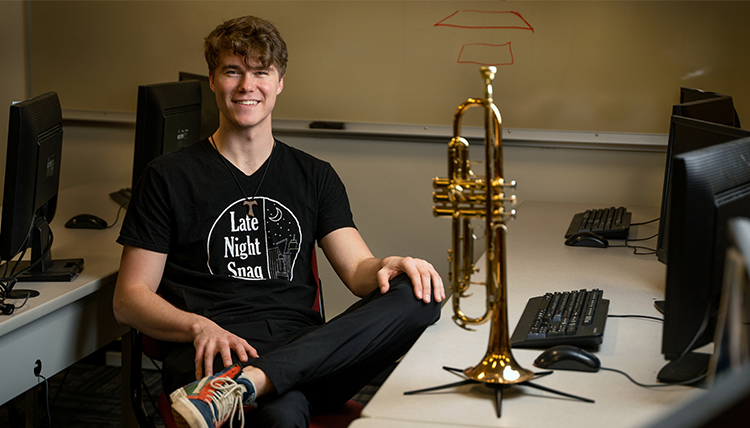 It was no mistake that Michael Zell (’21) chose Gonzaga for his engineering education – based on the University’s music department.

He decided to major in engineering based on his love for math, science and physics. And his dad, an engineer, also had an influence in the decision.

But Michael’s first love is music. He fell in love with the soundtracks to “Pirates of the Caribbean” movies, which he says inspired him to play the piano.

Through piano lessons, he learned the basics and then translated them into the jazz piano improvisation.

Then he learned trumpet, guitar and bass. And flugelhorn. He's doing vocal studies, too. “I think piano is consistently my favorite instrument to play, but recently I've been liking guitar a lot.”

He says a younger version of himself probably wouldn’t believe what he’s accomplished now. His natural knack and practice have been fostered immensely, he says, by other talented musicians in his band, Late Night Snaq, and David Fague, director of Gonzaga’s jazz band.

Being an engineering major is tough; adding so many musical outlets could be considered a distraction.

“There have been compromises that I've had to make, and it requires a lot of planning to make everything work out. But my advisors help me out – everyone is on your team because they want to help you.”

Michael continues, “I think Gonzaga – the teachers and the classes and the community – is very forward moving, and it really drives you to do your best.”

“There are so many opportunities. It’s up to you to take advantage of them.”

125 Things We Love About GU