Walking into Homeboy Industries always reveals a bit of Narnian magic. Not much unlike that wardrobe tucked away in the spare room of the professor’s house, the exterior of Homeboy is quite unassuming. What one may find inside is a very different matter.

Minutes from little Tokyo, across the street from the train tracks, the space that it occupies is both heavily trafficked and a bit undefined. This may also serve as a decent description for the people that tend to visit Homeboy Industries; their way of life is common in this part of LA, but the ways in which people define it often obscure more of the picture than they reveal. The caricature of the fiendish gang member with blood-lust for his neighbor is just as far off the mark as it is to say that these men and women have lived flawless lives. You see, people so very rarely are the angels or demons we make them out to be. The reality, as it so often is, is both a composite of these stories we fabricate and something else entirely. No one is merely a summation of the things they have done, yet those things inform who they are. Similarly, people are not their best intentions, for that reality lives off in that hopeful land. Only in coming face to face with the people we spend so much time theorizing do we meet the truth. 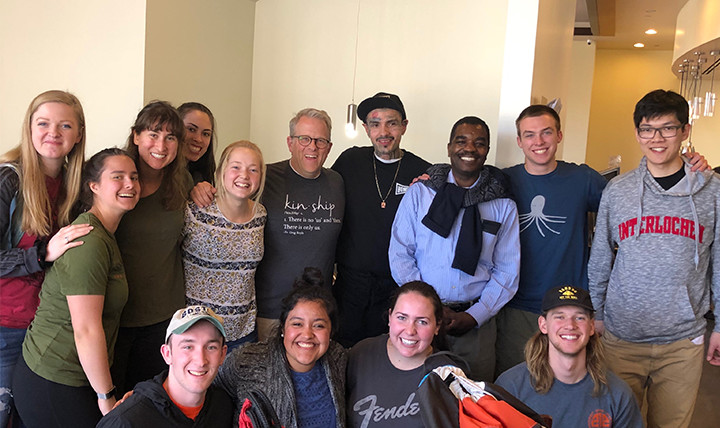 As we approach the front doors, the presence of 13 college students, a professor, and a Zambian priest does not go unnoticed. Many conversations are halted or quieted as we pass and the front doors are held open for us. Inside, we huddle in a tight group trying be as little an imposition as we can in the already crowded space. After a few tense minutes of feeling out of place, our tour guides stride over, explaining that daily announcements will be made before starting the tour. Tattoo-clad leaders announce the various therapies and programs being offered in the building that day and then a daily word of encouragement is given by one of the men there. Following this, we are led around by a charismatic and slightly scatter-brained homie who takes his time in explaining all the details of the building.

After the tour, we all shuffle over into the Homegirl Café, coming face to face with Mario who is working the register. I’d already met one story of Mario through Father Greg’s book. In the story, he was holding onto the pain of his past so tightly. After he had told part of his story to an audience at Gonzaga, a girl in the crowd asked him what advice he gives to his then adolescent kids. In replying, he got choked up and finally blurted out, “I just don’t want my kids to end up like me” (Boyle 205). The side of Mario I got to see that day in Homeboy was very different. He was in his element working the register and greeted our group with a smile which only became more solidified on his face when we told him where we were from. Thankfully, we had caught him when there was a bit of a lull in the café and he was able to talk with us for a while.

More on Father Greg Boyle and his Homeboy ministry

After speaking to some others in our group, he strode over to me reaching out a tentative hand and introduced himself. His eyes were bright and his smile was quick to appear. His tattoos encroached onto his face and some script flickered on his eyelids every time he blinked. But what overwrote every tattoo was the anxious childlike demeanor he had. His eyes would dart around tentatively and when we told him we were in awe of what we had read about him, he blushed and looked away. Very generously, he stuttered through a question, searching for the right words to ask about school and what I might want to do afterward. He didn’t end up finding the words, but he found the right eyes and the right catch in his throat. I told him I didn’t really know what I would do after school. He told me he knew that I would be fine. It was the first time in a while that I had believed anyone who told me that, but I know his statement came out of a number of assumptions about me. He probably figured that an affluent, college educated young man probably has his life pretty well figured out and that he would be able to face the challenges before him. He might be right, but it doesn’t change the fear and insecurity that nonetheless persists.

Or maybe it does. Just maybe, when we reach out in earnest innocent love to encourage one another we offer people a glimpse of the way that God sees them. The impact of that is powerful in consoling, inspiring, and molding people into the sort of being they ought to be. You see, that conversation was short and the precise dialogue that took place could have probably been interchangeable. What mattered was our demeanor and the mutual longing we both had to truly be with one another. Mario, even before I did, leaned into the discomfort of our moment. Recognizing that we have lived very different lives, he tried to meet me on my level, even if he didn’t fully know what that level was.

It’s moments like these that remind of my favorite Paulo Coelho quote: “When you want something, all the universe conspires in helping you to achieve it”. Help and encouragement are often found in unlikely places. In the brief meeting of a stranger, a war can begin to be waged on someone’s shame. All that is needed is the right heart, the right catch in the throat, and the right nervousness to show that you actually do care about the person standing across from you.

Corey Fusick graduates with a degree in business, May 2019.