James Moore ('72) is president of MW Consulting Engineers, the firm he co-founded in 1984. It has provided a broad range of services for projects as diverse as the Della Strada Jesuit residence, the Jundt Art Center and Museum, and the Foley Center.

His contributions to the PACCAR Center for Applied Science helped that SEAS building achieve a Gold LEED certification for sustainability. The first project Moore’s company took on at GU was Jepson Center, the home of Gonzaga’s School of Business Administration. Moore worked closely with professor and dean emeritus Clarence “Bud” Barnes on the project.

“It’s hard to pick a favorite,” he said of the many campus projects. “We’ve been involved with several dormitories, Tilford Center — the list goes on.”

The firm became a nationwide force in the 1980s when several bombings and attempted attacks pushed the U.S. State Department to propose significant security upgrades to United States embassies worldwide. Moore's firm, based in Spokane, was chosen for the project in Bogota, Colombia — the first of more than 15 U.S. Embassy projects in the company’s 34-year history.

“We have projects in a wide range of sectors — higher education, hospitals, libraries, embassies, the convention center,” said Moore, whose career in engineering began in Portland, Oregon with a memorable interview. “It was with an engineer who’d been in the business for about 50 years. He told me, ‘you’ll never be bored in this business.’ He was right. I’ve never been bored a day in my life. Now that I’ve been doing this for over 40 years, I can say I wouldn’t change anything. There have been no boring days — it’s amazing.”

Prior to coming to Gonzaga as a student, Moore moved around with his family. He looks back on his Gonzaga experience fondly and is grateful for the support and strong liberal arts foundation he received.

“In this business,” he explained, “you have to be technically proficient and able to interact with people. The world religions, philosophy, speech and other liberal arts classes I had, combined with the excellent technical engineering education, made a real difference. At the end of the day, our business is technically challenging, but it’s a people business. My favorite part has been the relationships I’ve build over the years with all of our clients."

To Moore, Gonzaga played an integral role in the success of MW Consulting Engineers both for himself as President of the firm and through the graduates the company has hired.

Moore further maintains his connection to Gonzaga by serving as a member of the School of Engineering and Applied Science’s executive council. Through the council, he interacts with the dean and other engineering alumni to provide useful input about the industry for the benefit of the students.

“Gonzaga engineering students are highly motivated,” he said. “There’s a passion for what they do. They’re wonderful communicators and fine people, which shows that the qualities and characteristics I experienced in the School are still happening here.”

In addition to the time Moore generously volunteers to the council, he gives back in other ways as well, supporting scholarships and programs with gifts.

“It’s valuable to have professionals giving back,” said Moore. “We have a scholarship, we work on projects, hire graduates, we’re part of the intern program — in fact, one of our vice presidents was an intern from Gonzaga who started 28 years ago. It’s truly a privilege to be associated with this university in so many ways.” 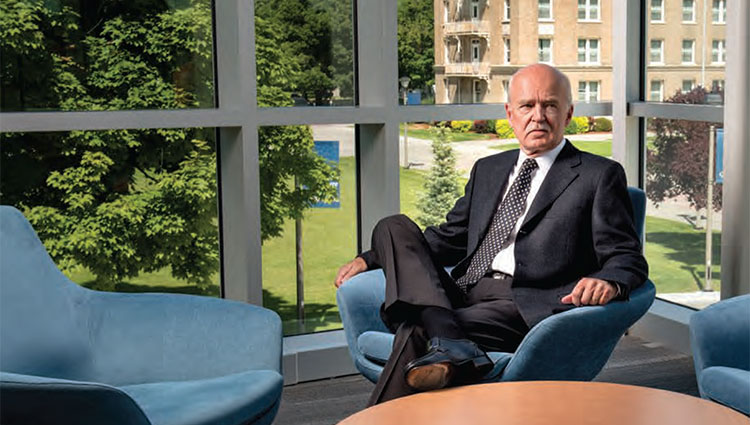