When Rob McCann (’95, ’05) joined Gonzaga as a resident director at DeSmet Hall – one of the rowdier men’s dorms – he embraced his role with an aptitude for alternatives to the typical punishments for breaking rules. After catching students with beer, or with girls in their rooms after hours, he would take them to volunteer at the House of Charity shelter in downtown Spokane instead of writing them up.

“The funny thing is that this didn’t stop students from misbehaving,” says McCann. “What happened is the guys started to like doing the service – even when they weren’t in trouble.”

Today, McCann is CEO of Catholic Charities Eastern Washington. His assistant director of development and communication is another two-time Zag grad, Sarah Yerden (’08, ’11). For both, service has always been a part of their lives. McCann attended Fairfield University, a Jesuit school in Connecticut that embraced Jesuit ideals through community engagement the way Gonzaga does. Yerden participated in the Center for Community Engagement’s Smile program at Gonzaga. “Volunteering at Gonzaga gave me that heart for service. It’s really allowed me to live my faith, which is a beautiful thing,” she says. 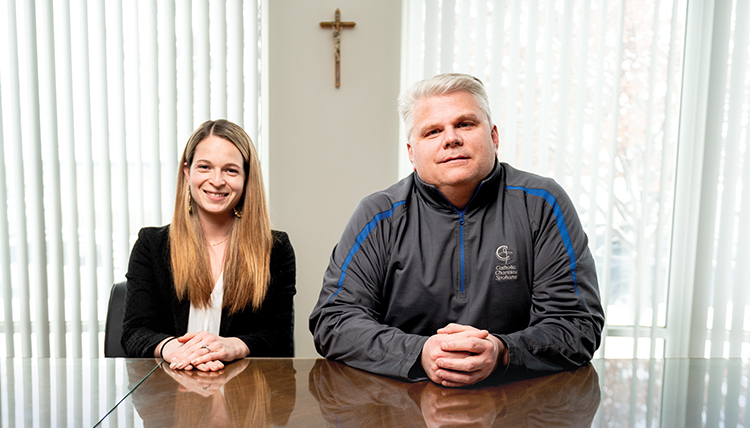 Work with Catholic Charities helps Gonzaga students to live out the mission beyond campus.

Catholic Charities programs are some of the first places Gonzaga students should go, says McCann, to interact with vulnerable populations. “That’s where they’re going to see the face of Christ.”

“A freshman student who leaves the House of Charity a little shaken up will be a senior who leaves saying, ‘I’ve got this,’ ” he says. Those students will become faithful voters, better parents and civically involved community members.

The partnership between Gonzaga and Catholic Charities started nearly 100 years ago, and ties have only grown stronger since. McCann and Gonzaga President Thayne McCulloh (’89) worked in Residence Life together in the mid- 1990s and often volunteered together. The two, and their organizations, have been collaborating for 15 years already, and, as McCann says, “The great value of this partnership is that it’ll go on long after any of us.”

The relationship between GU and Catholic Charities is mutually beneficial, providing services to vulnerable populations and rich experiences for students.

“The beauty of Gonzaga is that students start volunteering because they have to, and their experiences are so powerful they keep volunteering for years,” says Yerden.

And that in turn, she believes, impacts them for a lifetime.

Center for Community Engagement Director Molly Ayers watches Gonzaga students transform through their work with Catholic Charities. “These spaces allow students to learn how to engage with people who are different than them,” says Ayers. “We want our students to not only get a surface-level understanding of what’s going on, but to think more systemically about issues like homelessness and isolation.” 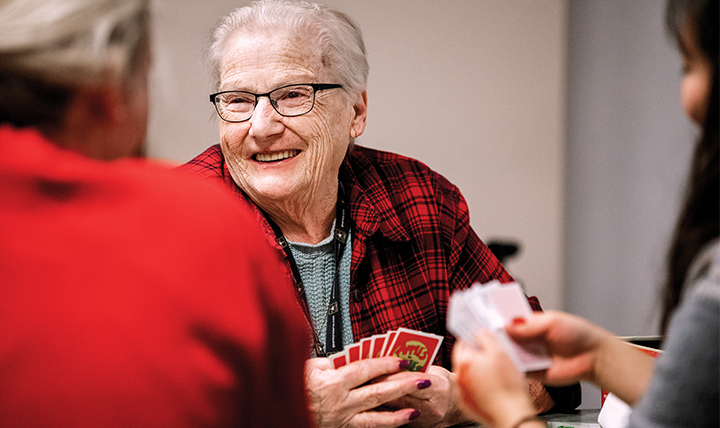 Those experiences influence career choices, passions and worldviews. “There is a great opportunity for vocational discernment,” Ayers says. For example, a business student may learn that he is really passionate about working with children, and that may help him decide what sort of career path to pursue.

“Experiences in the community – whether or not there is a direct application of service work to classwork – helps students to understand the complexity and connectedness of the world,” says Ayers.

Gonzaga offers around 100 service-learning classes every year, including one taught by Sima Thorpe, who founded CCE (then-CCASL) in 1994. Her service and leadership course is unique because students serve dinner at House of Charity on Thursday evenings, then immediately have class on-site. They explore leadership theories and focus on exploring their civic identities.

“It’s hard to tell where the theory ends and the service experience begins,” Thorpe says. “Students feed a couple hundred people and can see the difference they are making, at least in that day. But even more so, they are providing positive human interaction for people who may not have much of that.”

One student was well-known for offering haircuts to his peers in his residence hall, so Thorpe asked if he would bring his services to House of Charity one Thursday. One of his clients appeared not to have had a haircut in a while but “that student treated the client as if he could’ve been anyone, and gave him a beautiful haircut,” says Thorpe.

It was one example of the opportunities students have to look introspectively and ask how service to others will manifest in their lives.

Seeing the impact of programs up close also helps students use their voices to help when programs are threatened by changes in logistics. In 2017, they wrote letters to the Spokane City Council to express concern over reduced funds for the House of Charity. It was action inspired by seeing the root causes of injustice and the faces of those impacted most. The letters helped to garner community support for 24-hour funding in 2018. 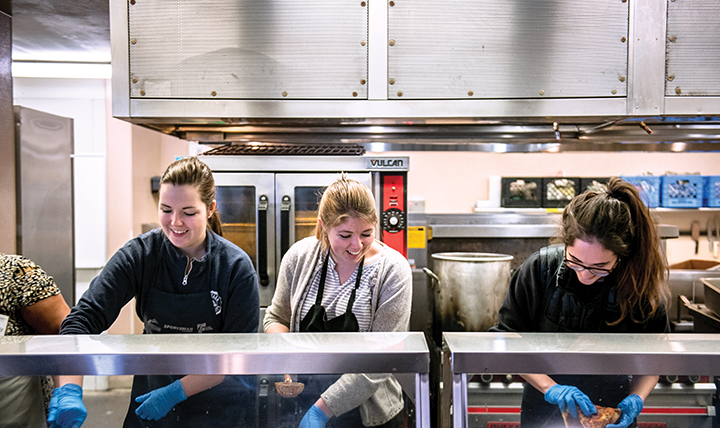 Multiple service-learning courses combine education with tangible service opportunities. Kelen Ahearn (’19) has completed four of them, and is also an active member of Gonzaga University Specialized Recreation, which connects students with adults who have developmental disabilities. “There’s something really important to me about being engaged in the community,” she says.

Ahearn loves the various roles students play at the House of Charity, including serving food and drinks and interacting with clients, as well as the classroom portion of the course that invites contemplation and conversation, often with guest speakers.

She remembers a conversation with a client named Bear during a personally challenging part of her life. He didn’t have much, but always used what he had to help people. “He started crying, and reminded me that we all have to just keep taking on challenges in life,” says Ahearn. She claims this conversation helped her in healing and reinvigorated her service work. 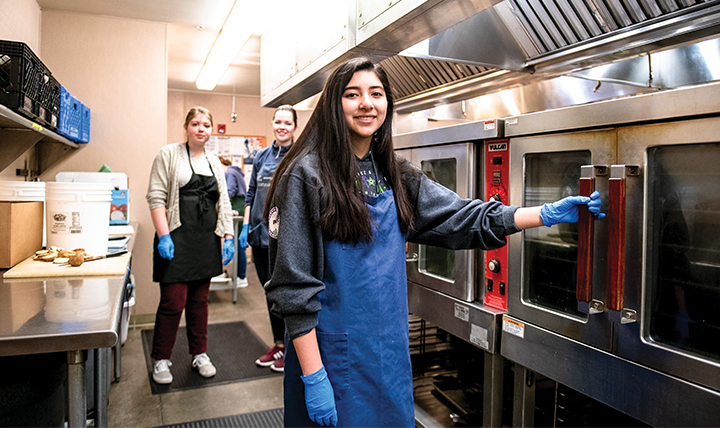 At the O’Malley Apartments, lunches are served in the recreation room every other Tuesday in an effort to bring residents out of their rooms. Banick says everyone is excited to share news and happenings around the building with the volunteers. She believes in the power of food in bringing people together. “Food really becomes secondary to building community,” she says. “It acts as the conduit.”

During his freshman year, Ivan Jimenez (’19) began volunteering with ZESST, a program that took students to the O’Malley Apartments for game nights with the residents. “At first, I wasn’t really doing service for the right reasons,” he says. “I had a sort of savior complex, where I thought that by giving up my time, I was really helping them.”

One conversation changed that. A resident shared with Jimenez that his dog had passed away, which led to a deeper conversation about life, relationships and similar struggles. “Whether you’re a 20-year-old in college or 80 years old, there are some things that never change,” he says. “After that, my time at O’Malley really changed, because I went in every time with an open heart.”

Now a senior, Jimenez has taken a leadership role in the Zag Volunteer Corps’ Semester-of-Service program and continues to assist at O’Malley. He started a project last year that brought residents from O’Malley to campus for a night of bingo. For the first night of the program in fall 2017, Jimenez expected 35 attendees, including student volunteers and CCE staff. Fifty-five participants showed up, motivating Jimenez to expand the event. The second event in spring 2018 attracted more than 100 participants, including residents from Maplewood Gardens Assisted Living Facility, and the event filled the Cataldo Globe Room. 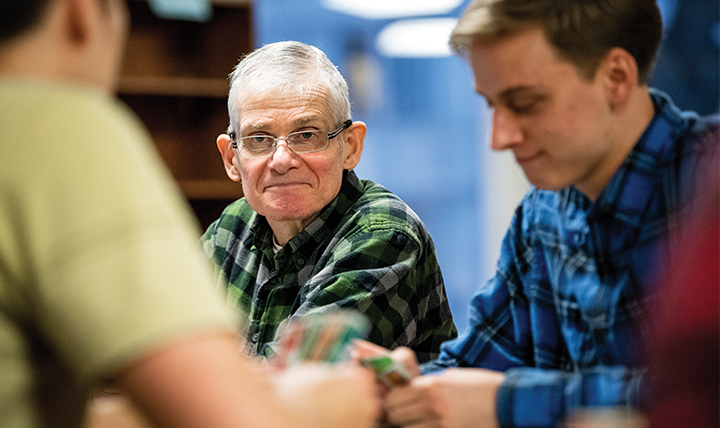 Even moving home at the end of the school year has provided a connection to Catholic Charities. For years, donation bins placed around campus during move-out made it easy for students to donate the the items that couldn’t be stuffed back into their cars. Though the bins are gone, students are still encouraged to drop off unwanted items at the Catholic Charities Family Services Center to benefit clients transitioning into permanent housing.

McCann’s decision to choose service over scrutiny for campus misdeeds during his days at DeSmet not only impacted students during his time on campus, it left a legacy that continues to improve the lives of many impoverished in our city.

You can support service learning and life-changing moments: gonzaga.edu/ReadersCare.