Tucked away inside the newly-renovated Rudolf Fitness Center is an office filled with glossy photos and championship plaques, and they don’t have anything to do with basketball. These medals and accolades belong to the women’s rowing members. They’ve been winning West Coast Conference championships for as long as the men’s basketball team has; their first victory came in 1997 and they’ve won 17 titles since. The magnitude of the team’s success is made more impressive by the nature of the team itself: many of the athletes walked on without a scholarship offer nor any prior experience.

Each athlete found her way to the team differently, but the common thread is athleticism and a desire to compete.

Meghan Casey (’21)  ran track  in high school and planned to walk on to the GU track team, but over the summer received an email that invited her to check out the rowing program simply because she  was a high school athlete. “I’m from Wyoming, so I didn’t even know what the boat looked like, but I thought why not? And this has really been the one sport that has clicked for me,” Casey says. She trained with the varsity squad throughout the season and was one of eight walk-on athletes to row at the NCAA Championships in May.

Despite the domination  over the last two decades, the program has experienced the successes and heartbreaks of any competitive team. Assistant coaches Kari Grambo (’06) and Madison Keaty (’14) were on teams that failed to win the WCC title, a  championship the team was expected to win. “They kind of have that unique perspective that a lot of our athletes don’t have, which helps in the coaching,” says former head coach Glenn Putyrae, who led the team to 13 of its titles.

“When I showed up my freshman year, they had just won the WCC, after losing the year before,” says crew member Ali Pinkley (’19). “They instilled in us this idea that the WCC is a goal, but so is going to NCAAs, and doing well at NCAAs. We want to be like the basketball program, where winning the WCC is just a hurdle.”' 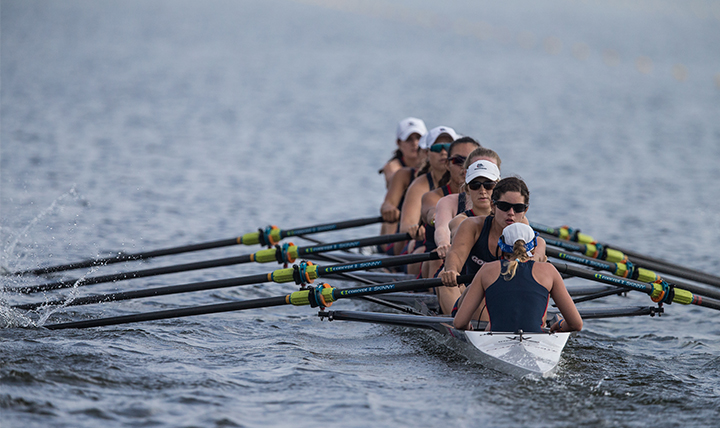 Pinkley was also a walk-on, although she rowed in high school. “I think there’s less pressure being a walk-on, because you come in with no expectations. The coaches are really good about seeing potential and incorporating people into the team to make boats go fast, which is the goal at the end of the day,” she says.

In a program with so many novices, the learning curve is steep but the payoffs are immense.
Pinkley says, "It's awesome watching the novices do their first 2K and then their last 2K. They improve so much and they may not be varsity or pulling some insane numbers, but they're still improving over the season and each time they're testing themselves. It's pretty inspiring to watch.” Now having completed three seasons on the crew, she has watched new walk-on athletes commit to the program the way she did several years ago. She can now share the wisdom she learned from older teammates with the novices: “Gonzaga is about winning. It’s about doing well. It’s not only winning in the 8-woman boat, it’s winning in the 2 boat and the 4 boat, as well. It means our team is winning as a whole.”

That’s the kind of motivation a team needs to turn a group of novice athletes into one of the most successful athletic programs at Gonzaga.

Our hearty thanks go to Coach Glenn Putyrae, who was voted the West Coast Conference Coach of the Year nine times during his 15 years as the head coach at Gonzaga. He led GU to 12 conference championships. Marisa Wortman, his successor, credits Putyrae for “an amazing job building the program and establishing a winning tradition,” and says she “can’t wait to get started and put my own stamp on the program.”