From Tragedy to Takeoff - the last snow goose set free

Even more important? The fact that in an instant, a majority of that 10,000 could – and did – perish in the unforgiving depths of the Berkeley Pit.

Located in Butte, Montana, the Berkeley Pit is deemed as the world’s largest Superfund site. Superfund sites include thousands of areas throughout the country where potentially hazardous waste resides, materials dumped from prior operations such as manufacturing facilities, processing plants, landfills and mining sites. When responsible parties cannot be identified, The Federal government funds the Environmental Protection Agency to clean up these contaminated sites, though clean-ups may take years to complete.

In November 2016, those previously mentioned migrating snow geese flew over Butte in search of warmer climates, by-passing their usual stopover point of Freezout Lake. Unfortunately, the only water source in the area was the Berkeley Pit, a former open-pit copper mine that does not freeze due to its astronomically high acidity level. Its corrosive nature is a culmination of seeping mining waste, copper and calcium tailings and arsenic from sloughing walls, all by products from its original operator – Atlantic Richfield Company (ARCO).

On that fateful day in November, ten thousand geese landed in the toxic water, which began decaying their legs instantly. Others who ingested it suffered severe internal damage. Experts suspect that many of the original ten thousand geese survived and continued to fly south. However, no official carcass count was ever published, and thousands of birds that resided in the water for an extended amount of time died from their injuries.

Once the migrating flock vacated Butte for the season, the area supported one lone snow goose – a resilient survivor from a horrific tragedy.

A passionate wildlife biologist and Butte native, Wilde fatefully had traveled to be home over the winter break of 2016. During the break, Wilde volunteered with Vanna Boccadori of Montana Fish, Wildlife and Parks, and the pair embarked on a series of meanderings in the area, which included tracking an injured mountain lion caught in a bobcat snare and monitoring and counting the elk of the Fleecer Mountain herd. The project that had the biggest impact on Wilde, though, was the chance to release the last surviving snow goose from the Berkeley Pit disaster.

On the day of release, Wilde and Boccadori traveled to the pet veterinary hospital where the sole surviving goose was living in a makeshift stable – an exam room covered in straw. A desperately cold day, the skin-pinching 13 degrees below zero temperature meant a “wild goose chase” for Wilde and Boccadori to look for liquid water. Eventually, they found it in Silver Bow Creek, a former Superfund site and the headwaters of the Clark Fork and therefore the Columbia River. Getting to the creek required a brief hike, but it was worth the effort.

For Wilde, releasing the last surviving snow geese of the disaster was both a powerful experience and a disturbing one. Feelings of isolation emerged, yet the scene of the goose gracefully entering the water was a heartwarming vision. Wilde knew that the release provided closure for the city, as well as for himself.

The snow goose’s release symbolized something greater than the beauty of nature, though. Wilde saw it as a bigger action that could motivate change. “Because of this tragedy, management can now turn on a dime and help curtail past transgressions.” 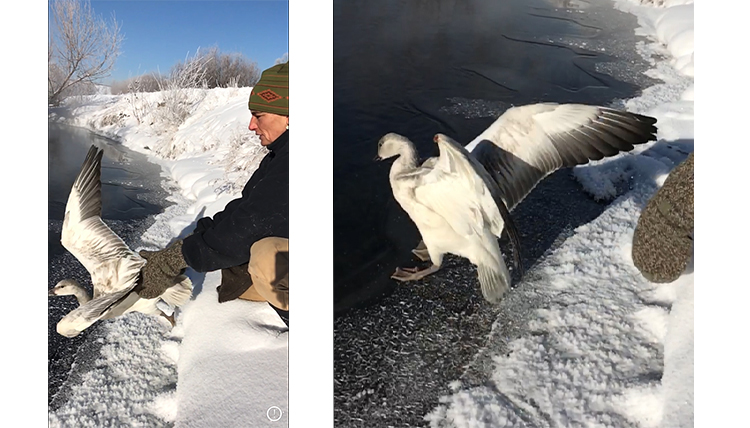 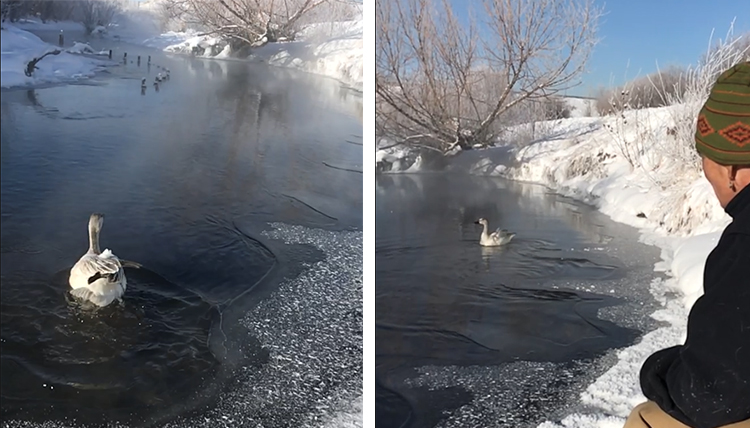 Montana Resources, the mining company that manages the Berkeley Pit, has dedicated time and money to find new and innovative ways to scare migratory birds away from the pit’s harmful waters – safely firing flash cannons and ping-pong balls at birds who stray too close, for example.

Being part of profound experiences like the release of the snow goose is just the start for Wilde. As he embarks on journeys throughout the Rockies with his current employer Ecology Project International, a nonprofit science and experiential education company, he hopes to be an educator on how humans can limit damage to nature around them, as well as how they can reintegrate into those systems. “People often think that science is a tool to rid yourself of emotion, but what I’ve come to realize is the more you understand something, the less you fear it and the more you hold stake in it.”

With a pure curiosity and love for the natural world, Wilde certainly understands what is at stake. And although the release of the last surviving snow goose of the Berkeley Pit disaster did not originally spark his passions, it certainly held them steadfast.