Dating Through The Decades: A Zag Love Story

We asked Gonzaga Magazine readers for their dating stories, and are happy to present quirky romances from almost every decade since the 50s. 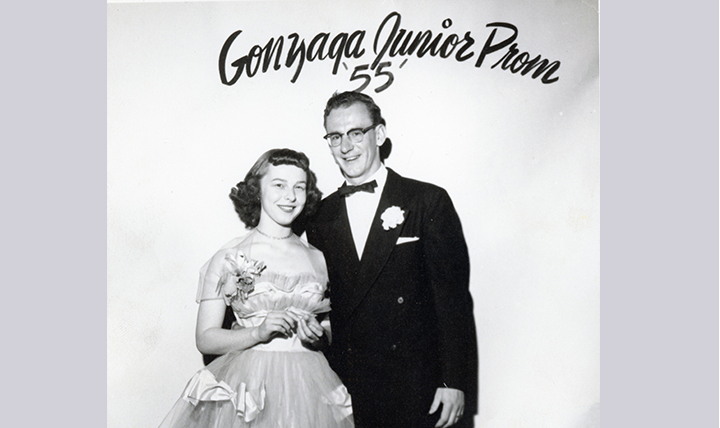 I’d been scoping her out for over a month. In March, my roommate Dirks and I went to a play at Holy Names College. When we saw Darlene on the stage and before I could even open my mouth, Dirks said, “Dibs on the redhead.”

But later when he hadn’t asked her for a date, I couldn’t help myself. I saw her dancing with a sleazy guy in a skin-tight chartreuse silk shirt. His right hand was sneaking down – south from her waist. She looked like a deer caught in headlights.

When the band stopped a moment, I sidled next to her and said in my best Butte-America-English, “Wanna dance?”

She glommed onto me. We danced continuously until midnight. What a night!

The next day, I called my dream girl at Marian Hall and invited her to attend a Billy May concert. When I arrived at 7:30, she wore a royal blue taffeta dress, blue suede high heels and a big smile. We danced every dance. I had the best time I’d ever had in my life. Afterwards, I splurged and paid for dinner at the Paragon for the four of us. The service was slow.

Not owning a car was tough – our main mode of transportation was the “heel-toe express.” Our world extended from the streets of the Logan neighborhood to the Spokane River. We walked together every day, everywhere. Friday nights were the best – Don Jans’ three piece band provided live music at the weekly COG mixer. Our favorite song was “Cherry Pink and Apple Blossom White.” We never sat out a dance.

After we got engaged, we went to 8 a.m. mass Sunday morning at St. Al’s. Then we walked to the Paragon on Division for breakfast. Most Sunday nights, we started at the COG where they showed old movies. We always ended up at Frankie August’s Pizza Parlor on Hamilton. They had a TV, and we loved Alfred Hitchcock Presents. Marian Hall’s curfew was 9:30 pm. Since the TV show ended at the same time, we had some quick walks down Hamilton and over Boone. Beginning in September 1955, as senior class president, I got a little card that gave me free admission for two to any Gonzaga affair. We didn’t miss a thing.

After we married in August 1956, money was tight. Darlene and I supported ourselves that year on her job – she made $200 a month at Tel-Electric on North Division and I worked part-time at the Phillips gas station. Just before the 1956 Military Ball, I got a traffic ticket driving home on Upriver Drive. Sadly, unable to pay for the after-event dinner, we stayed home and dined on Dinty Moore beef stew.

A few years ago, we drove from Wenatchee to Spokane for a Zag game in November. Having parked on Astor, past St. Al’s, we had a long walk through campus after the game. We stopped for a moment between St. Al’s and the Ad Building. We kissed – it felt great! We felt like kids again. 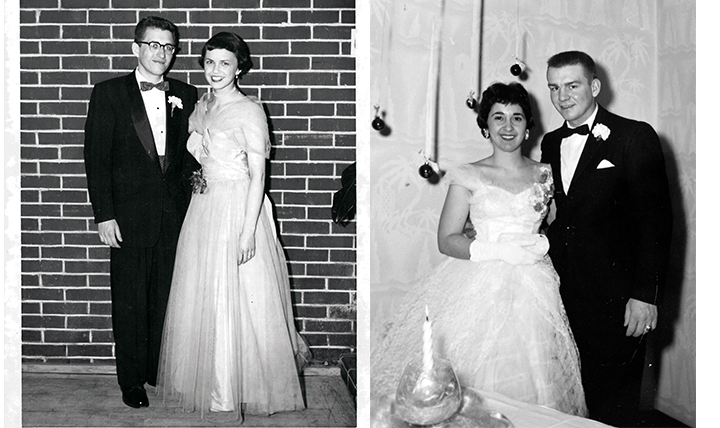 (At left: Dick and Helen Cheek; at right - Jack and Carol McElory)

As an accounting major, John Sisk’s class on Shakespeare’s Tragedies might not have initially been Richard Cheek’s cup of tea. It seems fair to say that it eventually became one of his favorite classes for two reasons: first, John Sisk was a thoroughly enjoyable professor; and second, Richard was able to take the class with his girlfriend at the time, Helen Crowley. Sixty years of marriage and eight kids later, the couple still looks back fondly on that semester.

A bachelor’s in Chemical Engineering wasn’t the only thing that Jack McElroy (’63) ended up pursuing during his time at Gonzaga. Little did he know that he would meet Carol Bambino, who became his loving wife before he even earned his degree.

Jack and Carol’s story began in 1959, when Jack returned to Gonzaga after being involved in a plane crash the previous winter break. Jack was a pilot and officer in the Washington Air National Guard, Carol was an aspiring nurse training at Sacred Heart School of Nursing. On October 15, 1959, a proposal in Jack’s 1957 Austin Healy on the banks of the Spokane River proved the couple’s commitment – Carol and Jack were engaged! Still, because Carol had taken a required oath that she would not get married while in nursing school, the pair had to wait to wed.

According to Jack, the couple dated almost daily, except when he was on flight duty at nights. During those times, dormitories had curfews, and Carol would have to be back to her dorm before 10 p.m. Dates often consisted of movies at the East Sprague Drive-In Theater, roller skating on North Division, attending dances at the Grange in Spokane Valley and eating burgers at ZIPS on Boone.

Jack and Carol became Mr. and Mrs. McElroy on July 7, 1962, just before Carol graduated from nursing school (despite the required oath not to get married). Their first daughter, Toni, was born in May of 1963, and Jack was able to hold his newborn baby girl in his arms at his graduation later that month. The couple moved to Tri-Cities after graduation and had their second daughter, Jill. Though Carol passed away in September of 2015, the memories of dates at Gonzaga and in Spokane live on.

’72, ’74 Greg Lipsker and ’73 Anne-Louise (Pacheco) Bennett did not have the luxury of a car (or friends with cars) while dating at Gonzaga during the 1970s, but they did have plenty of organized events on campus to keep them entertained while dating. For most of their dates, the couple attended sporting events, dances, concerts or movies on campus. One particular date was a Halloween Dance that required costumes – Greg and Anne-Louise created homemade costumes and went as Mr. and Mrs. Claus. Apparently the judges appreciated their unique flare because the pair won!

One of the hardest parts to dating in the 70s was the curfew. Curfew was enforced for women’s dorms at 10 p.m. on weekdays and midnight on the weekends. Boys were not allowed inside the dorm past curfew, and during the daylight hours, they still had to wait for their lady friends in the front reception area. In the evenings close to curfew, one could witness the walkways to the dorms filled with couples in goodnight embraces.

Getting off of campus for a date was a big deal, so Greg and Anne-Louise were sure to make the most of it. Their favorite eating spot was a place called Granny’s, located up near Sacred Heart Hospital. Because it was on the South Hill, the couple always made Granny’s a double-date location so that they could get a ride there in someone’s car. The enormous sandwiches of turkey, ham or roast beef always made the trip worth it, though. 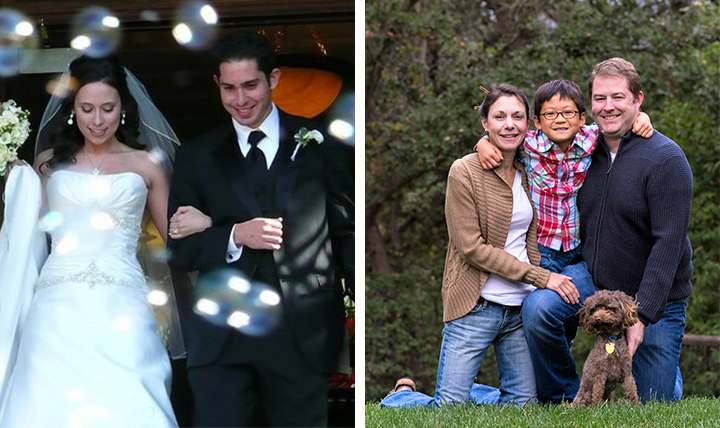 (At left - Angela Champoux and Russell Sypowicz; at right - Sophie and Shane Johnson)

’98 Sophie Johnson did not have much for dating choices in Father Krall’s Intermediate Latin class – out of eight people in the class, three were boys. Over the course of this semester before her graduation, Sophie developed a crush on one of the boys. The second boy was off-limits because he was planning on becoming a Jesuit. The third boy she had not given much thought toward.

One day in class, one of the boys asked her if she wanted to go to the movies the weekend before graduation; it was the third boy. Though it was not her crush, Sophie was still giddy that she was being asked on her very first date. About a month later, her first kiss followed with that same boy. Eventually, the pair were married by Fr. Krall at St. Aloysius within a couple years of their graduation.

Over the last 17 years, Sophie and her husband, ’98 Shane Johnson, shared many different bookshelves in many apartments and houses, yet their two Latin 101 textbooks always seem to follow them. On either side of the language books, one may find a copy of their son’s favorite E. B. Webb novel and the latest work from Malcolm Gladwell. Among all of the books that have made the Johnsons who they are, there still rest the Latin books that remind Sophie and Shane of Fr. Krall’s class, where they brought a dead language to life and made it a language of love. 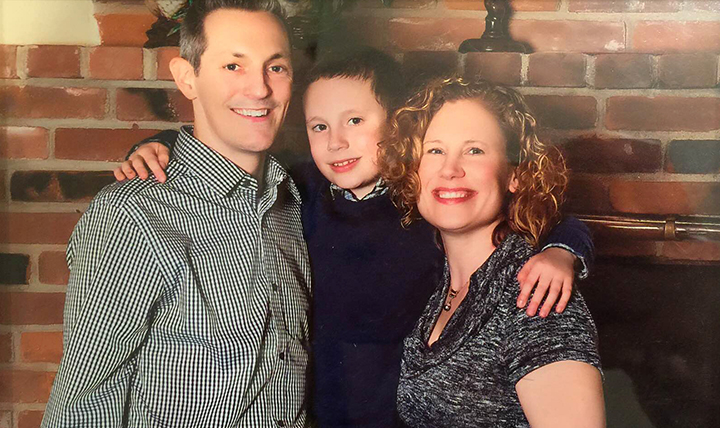 Pam (Wilson) Ehrbar (’95) met Joe Ehrbar (’93) met during her freshman year while hanging out at her roommate’s brother’s house off campus. A chat about music led her to listen to him DJ the KAGU Sunday night reggae show, which he hosted as “Rasta Bob Harley.”

When Joe asked Pam out a few short weeks later, they walked in the snow to Geno’s. Two weeks later, Joe rode his bike to flower shop (again in the snow) and transported a dozen red roses, balancing a box and a vase under his arms to surprise her for Valentine’s Day.

What did she get him for Valentine’s Day? “I bought him a fish,” she says. “We named it Rasta Bob. He died three weeks later (R.I.P.). I’m still trying to figure out how or why I decided to buy him a fish.”

It worked out. They moved to Seattle, married in 2000, and had son a in 2004. They’re looking forward to celebrating their 25th dating anniversary this coming January.

Everyone on Gonzaga’s campus knows that a swipe into the COG when you don’t have a meal plan means true friendship, but using your Bulldog Bucks on someone is akin to handing over your heart. Luckily for ’05 Angela Champoux, her future husband ’05 Russell Sypowicz handed over his heart on their first official date at the COG. A Bulldog Bucks-funded lunch turned into more dates on Gonzaga’s campus – meeting at Crosby in between classes, visiting each other at work study jobs, attending Mass in the student chapel and sitting with the Kennel Club at basketball games. The couple’s wedding in June 2008 in the chapel of College Hall was the culmination of these Zag outings. Angela says that Gonzaga was, and still is, a very special place for them. 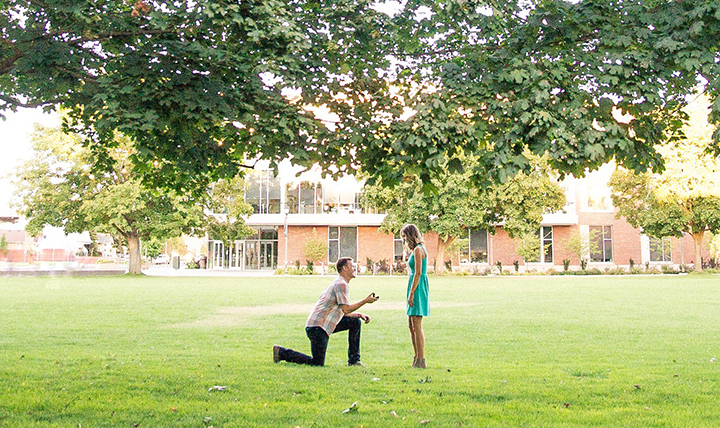 The sparks were flying on Foley Lawn the first day of freshman orientation in 2010. That’s where Colleen Walsh met her future fiancé David Bigelow for the first time. They both lived in CM their freshman year, which helped encourage a relationship that started right away in September. This August, David took Colleen back to the very spot where they had met on Foley Lawn and asked her a new question about her name – if she would become Mrs. Colleen Bigelow. Colleen accepted, and a celebration at Jack and Dan’s ensued afterward with many of the couple’s Zag friends and family. Wedding bells for this Zag couple will ring in August of 2017.

Many thanks to all who shared their Zag romance stories with us! Stay in touch: editor@gonzaga.edu.