Tommie Camarillo spent 12 days in 1970 sitting in a large circle with neighbors and friends in the Logan Heights neighborhood of San Diego.

They were underneath the intersection of two large overpasses—Interstate 5 (erected in 1963), which runs along the Pacific Ocean from Mexico to Canada, and the Bridge to Coronado (built in 1969), a wealthy community across the bay.

For years, residents of Logan Heights unsuccessfully petitioned the city to create a park. The 12-day sit-in was a final effort in response to the arrival of bulldozers to create a highway patrol station in place of a park. Through the activism of residents, students from San Diego State, and others, Chicano Park became a reality, commemorated each April 22.

Chicano Park celebrates the history and culture of Chicanos—indigenous people who lived in portions of at least eight southwestern U.S. states, long before there were the United States and border fences. Over the last 45 years, artists have created 92 murals on the concrete walls of the almost 8-acre park, the largest collection in the country. 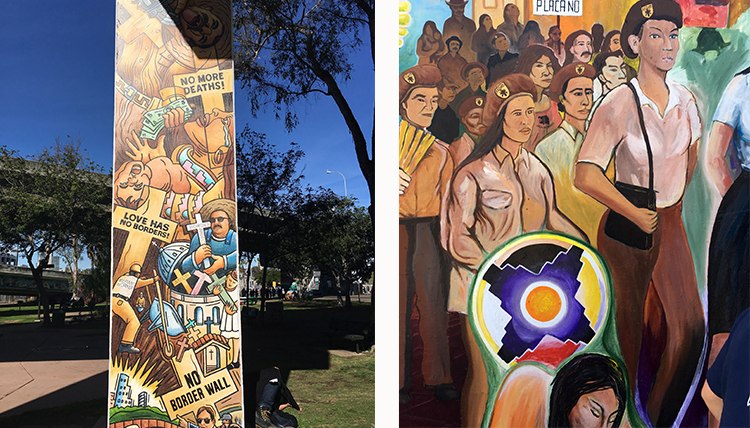 Any artist wishing to paint a mural must submit their idea to the Chicano Park Steering Committee made up of more than 50 community members. A few minutes walking around the park amply demonstrates how seriously the committee takes the submission process. The murals—from the first (1973) to the most recent (2017)—artfully juxtapose oppression and resilience.

As Tommie Camarillo, now in her 70s, described an upcoming neo-Nazi rally in the park, a quote from journalist Nikole Hannah-Jones came to mind: “If there is a benefit to having to fight for civil rights over so many decades, it’s that it makes you presciently aware of the way that racism does not so much go away but adapts to the times.”