Battling the Border: A lesson in immigration justice

Justice in January is a one-week service immersion program run by Gonzaga’s Center for Community Action and Service Learning (CCASL). This year’s project – exploring the realities of immigration and security along the U.S.-Mexico border – was an experience that the 21 student participants agree will remain one of most significant experiences of their time at Gonzaga. 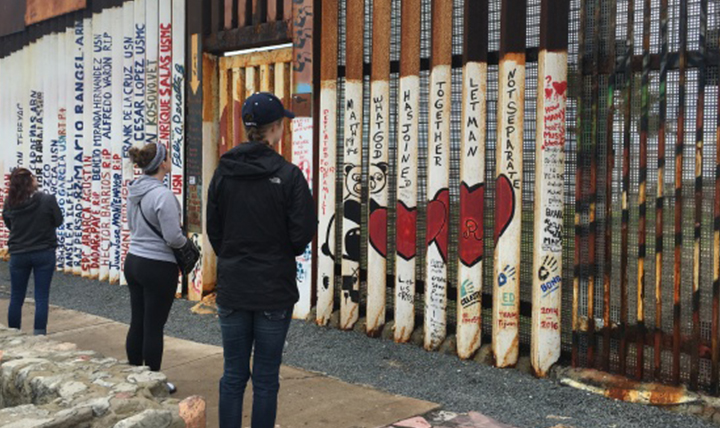 Being a first-generation American, immigration has always been a common topic at the dinner table. My parents are now legal citizens, but when they entered the United States in the 80s they were undocumented. Many members of my family remain undocumented and with the current situation, it does not seem likely that citizenship is in their near future.

Still … when I landed in Tucson where our team would experience the realities at the border near Nogales, I had no idea what I was really getting myself into. All I had was an eagerness shared by everyone on the team to expand our individual knowledge on the current immigration status.

One of the reoccurring themes during this week was humanity – or the lack of it. Going into the courtroom to observe Operation Streamline was like watching a TV show, staged and unreal. In reality, we were watching real people being sent to prison. A group of about 60 shackled individuals received sentences of 30-180 days in a federal facility facing immediate deportation upon release. It was even more unbearable to watch when one of the judges told us that the reason these individuals were shackled so intensely was not for security reasons, but to make them have the worst experience possible so that they would be less likely to return.

Is the desire to deter these human beings so strong that it becomes acceptable to completely strip them of their human dignity? This became increasingly evident when we visited the border patrol agency in Nogales, Arizona, where we learned about the security measures underway at the border. Although the presentation had some good information about the advancements at the border, once the agents started talking about the job as a “huge game of tag,” I became uneasy again.

Was it that simple to turn these human beings and their livelihoods into a game?

Most of the people attempting to cross the border are just trying to find a better life for their family, free from poverty, hunger and violence. It is not as easy as just applying for a visa and waiting. It is so much more complex (and expensive) than that. Visas to enter the United States from Mexico are backlogged and applications filed 20 years ago are just now getting reviewed. 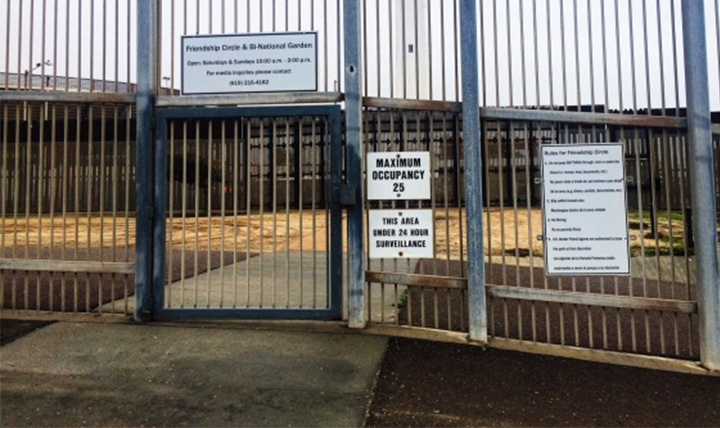 Going to El Comedor, a space created by the Kino Border Initiative to provide meals and resources to migrants preparing to cross and migrants who have been deported, was, fortunately, a chance to see human dignity in action. Conversation came quickly and easy, even though there was a language barrier for most of the students.  I helped translate when I could, but even without a translator, students communicated with their hands and shared laughs. I spoke to a group of young men who had just been released and were heading home. They were maybe two or three years older than me. We talked about how the food served there was good, but how it would never compare to the food that our mothers made. One of them asked me if I was a citizen.

He said with a mere piece of paper in my pocket, I could cross that border without any troubles.

He wished he could have one too, but after his fourth deportation, this seemed unlikely. In that moment the only difference between him and me was that I could walk a mile north, while he could not.

Although there are many complexities as to why migration has become criminalized at the U.S.-Mexico border, a short week there reaffirmed my belief that – regardless of where you stand on the issue – people who are migrating are just that, people. It is easy to ignore that aspect without seeing the faces or hearing the stories of those who are impacted by legislation.

Meeting with those crossing the border and hearing their stories didn’t simplify anything. It made things more complex. Now sitting on campus 1,500 miles away from Mexico, I am left with a desire to continue learning to connect immigration with the values I have learned here at Gonzaga.