It’s a familiar sight to see Gonzaga students holding open doors for one another on campus. Thanks to the Gonzaga Alumni Mentoring Program (GAMP), that gesture continues in cities across the country as Zags help one another discover their passions and find meaningful work.

GAMP provides career mentorship for about 700 students and alumni each year, with mentors representing 113 career fields, including business, education, health care, engineering, communications and law. Gonzaga Regent Jim Day (’65) first began to envision a program like GAMP in 1992, when he helped a business school student from Wyoming find a job in Seattle. Day talked with friends in the alumni association and the School of Business to create a mentoring network the following year. By 1996, GAMP found a home on campus, with a budget and staff resources, including a director, Kevin Pratt (’87), who shepherded the program within the Career Center until his retirement in 2015.

From its beginnings as a set of index cards in a shoebox to a newly launched online platform that allows mentees and mentors to import LinkedIn profiles, GAMP has given thousands of Zags solid career footing.

Mentoring is like “an artist starting with a rock or a stone or marble,” says Day. “They can visualize the end product. People have so much energy for this.”

“It’s never too early for a student to seek out a career mentor.”
– Erin Shields, associate director of alumni and employer engagement 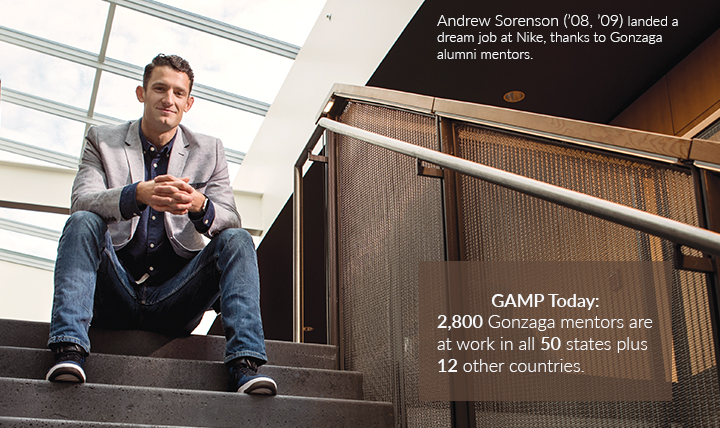 Andrew Sorenson (’08, M.B.A. ’09) credits his Gonzaga mentors with helping him secure a job that he didn’t know he’d love. As an undergraduate, he began to ask himself: Who am I? What do I have to offer? How do I find the right job? His GAMP connections gave him reassurance that he wasn’t alone in feeling overwhelmed by possibility.

A few years into a job working in computer software, Sorenson began to realize that his skills could be used better elsewhere. Thanks to the connections he had through GAMP, he picked up the phone and began to talk to people. Lots of people. He had mentors in different locations, including some in Spokane and a few who worked for Nike. With a background in computer science, he often hit dead-ends when trying to find the right contact at Nike, but after five years of intentional networking, he found the person he needed to reach. “It was like a snowball rolling downhill from there,” Sorenson says.

Within two years, Sorenson received a phone call from a recruiter, and he walked onto the Beaverton campus five weeks later, a new Nike employee. “I would rather have a bad day at Nike than a great one anywhere else,” he says.

Sorenson credits his mentors with helping him develop persistence and perspective. “Before I came to Nike, I knew it was important to foster the relationships I did have. I was always trying to learn something so I wasn’t telling the same story about myself every single time.”

Now, Sorenson helps students as a mentor and says the experience is equally rewarding on the giving end. Mentoring allows Sorenson to preach the power of networking, an enthusiasm that hasn’t died in the handful of years since he first secured a position at Nike.

“Every once in a while, you meet someone new and realize, wow, I’m never going to forget that person. I’m glad you’re on this planet.” 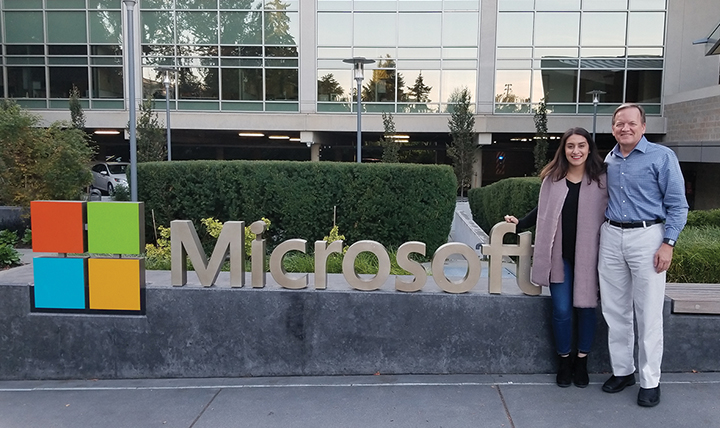 Jenelle Sisco (’17, left) is a business operations associate at Microsoft, where Arnie Mondloch (’84, right) has connected many Zags to career opportunities.

Arnie Mondloch (’84) won’t hesitate to tell you that even an experienced mentor needs peers and colleagues to take the next career step. He has the Gonzaga community to thank for his landing at Microsoft in 2000, when he ran into an old friend and former fellow trumpet player in the Gonzaga jazz band. The two struck up a conversation when they happened across each other at a golf tournament, and before long, Mondloch was making the move to join his friend at Microsoft, where he has been for 18 years.

Mondloch was among GAMP’s first mentors in the mid-’90s and has helped dozens of students. “It’s totally energizing,” Mondloch says. “The world is wide open to these students. I feel that I can help take away some of the stress and anxiety that comes from wondering where they’re going to end
up.”

Much of the mentoring dynamic is about connection. In conversations with students and alumni, Mondloch listens for what drives others. Passion goes far in developing a successful career, he says. A career path tends to be meandering for the majority of American adults, and that’s OK. “Students shouldn’t stress about getting into the job that will take them where they want to go.”

Mondloch encourages Zags to leverage the vast network of the Gonzaga community. “I was 16 years into my career and it was still a Gonzaga connection that landed me at Microsoft. People want to help, and no one should be shy about asking for that help.”

With roots in the Pacific Northwest, GAMP relationships often result in job placements and successful career transitions in Oregon and Washington, but as Gonzaga’s alumni mentoring network grows, so do career opportunities.

“Cities like Los Angeles, San Francisco and New York are now opened up to Gonzaga students in a way that wasn’t a possibility when I graduated in the 1960s.”
– Jim Day, GAMP Founder