Veteran Spotlight: Ranger on the Frontlines

Under cover of darkness, in the bitterly cold Afghan mountains, with night vision goggles to find the enemy, U.S. Army Company Commander Brian Slamkowski led raids into opposition territory in 2019. With the support of a well-trained contingent of forces, their missions were most often successful.

Today, Major Slamkowski (’10), a Gonzaga and ROTC Bulldog Battalion alumnus, is one of a half dozen U.S. Army captains – out of 27,000 – chosen in 2021 as a General Wayne A. Downing Scholar to pursue an advanced degree in international policy.

He chose Stanford University's Freeman Spogli Institute for International Studies and will earn his master’s degree in 2023. He's part of a cohort of 26 students from all around the world.

"Cyber policy is my specialization, and where better to study it than in Silicon Valley, understanding the cyber environment and where it will take us in the future,” Slamkowski says. "Beyond the policy perspective, I've been challenged by classmates that don’t support a U.S.-centric worldview and don’t particularly care for the U.S. military. I’ve relished the opportunity to be an ambassador for our country and the Army."

Slamkowski is an Army Ranger, the toughest of the tough. Isn’t it apt that a soldier with the name Slamkowski is a Ranger? It sounds tough, doesn't it? Like the nicknames given to him by his fellow ROTC cadets at Gonzaga – Slam, Slammer, B-Slam or Slamborghini.

After graduating from Stanford, Slamkowski will move to Fort Benning, Georgia, to join the 3rd Ranger Battalion. He is on course to move through the ranks as a liaison officer, operations officer, and eventually executive officer at the battalion level.

He previously served as a Stryker company commander in Alaska and as a platoon leader in the 101st Airborne Division. He deployed four times to Afghanistan, once to Iraq and Syria, and completed training deployments to Japan and Korea.

"The ability to learn and lead in different cultures and come to respect others and their way of life is best done on the ground in another country,” Slamkowski says. “The language, the smells, the sounds, the unique people have all made for great experiences.”

The major shares a little bit about his Ranger experiences.

“Being trusted as the ground force commander on raids in Afghanistan, against a determined enemy, was high stakes and the most rewarding part of the job,” Slamkowski says. “But I didn't dwell on the risks once we launched because the individual members and small teams that made up our company were so good at what they did.”

Showing his true humility, “I was more concerned about letting them down because they were so well trained,” Slamkowski says.

For Major Slamkowski, the best day on the job is any day in command.

“I love leading people and getting the most out of them while they challenge me to level up as well,” he says. “I learn daily from my subordinates, peers and superiors to get the most out of myself.”

“It is great seeing young Rangers and soldiers on a tough operation, coming together, utilizing technology, trusting each other, keeping each other safe, and accomplishing their mission.”

In the Army ROTC at Gonzaga 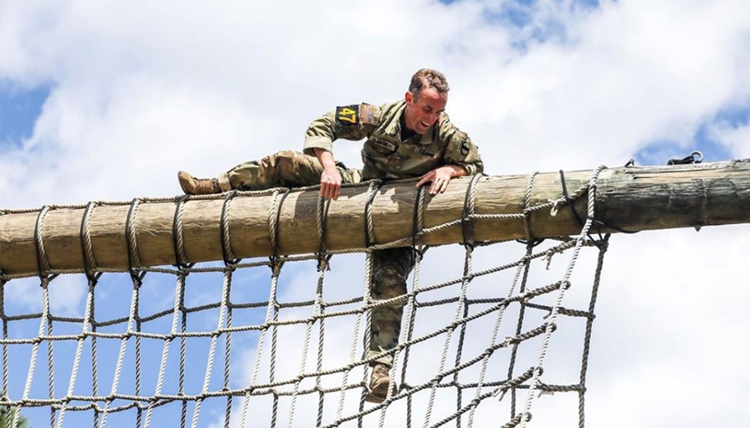 Slamkowski grew up in Colorado Springs, in the shadow of the Air Force Academy. Then, while in eighth grade, 9/11 happened. It reinforced in him a desire to serve his country. He earned Air Force scholarships to a couple of colleges, but Gonzaga’s community feel, size and Army ROTC program felt like the right fit for him.

“I’ll never forget visiting campus in the dead of a Spokane winter as a (high school) senior during March Madness,” he says. “A snowstorm diverted us to Seattle before we were able to return to Spokane later that night. Seeing the campus’s family-like atmosphere in the middle of winter sold me on the place! I also ran into Adam Morrison twice in two days on campus at Rudolf (Fitness Center) and DeSmet. It was a great visit to a place that would soon become home.”

As it turned out, Slamkowski, who earned an ROTC scholarship, did not participate in Ranger Challenge until his senior year as he doubled as an NCAA Division I runner on the cross-country and track teams his first three years. His Ranger Challenge team was led by his friend Matt Fazzari, a father figure among the cadets. He had a family and was more mature than most of the cadets in the program, Slamkowski says. “Our team was comprised of people who wanted to lead by example, mentally and physically, building a winning culture by going beyond what is asked of normal ROTC cadets.” Fazzari taught the whole ROTC program to value mentorship and coaching as a leader. He was tragically killed in Afghanistan in 2012.

Slamkowski competed against the best in two of the Army's Best Ranger Competitions since graduating from Gonzaga. He and teammate Michael Blanchard, a University of Montana grad and friend, finished fifth in the nation in 2022 and third out of 50 teams in 2016.

The major is married to Laura (’11), an exercise science major and former cross country and track athlete who is now a physical therapist at Stanford Children's Hospital. They have two kids, Anna, 4, and Tessa, 2. The family is expecting a third child in December.

“We’re a Zag family,” Slamkowski says, “Gonzaga through and through. Whenever any basketball game comes on TV, the girls ask, ‘Is this the Zags?’”

Slamkowski has two sisters, both Zag grads: Liz (’12) is the director of the Office of Service and Justice and girls’ cross country coach at Gonzaga Prep in Spokane. Allison (’13) is a nurse in Boise.

About the Bulldog Battalion

In 2022-23, Gonzaga’s ROTC Program celebrates 75 years of meeting the country's requirement for officer-leaders in the U.S. Army – active duty, National Guard and Reserves.

Gonzaga established the first informal Cadet Detachment in 1897 and the modern-day program in 1947. The Bulldog Battalion also includes student-cadets from Whitworth University and Washington State University College of Nursing.

Learn more about ROTC:
Get Started

Major Brian Slamkowski describes the sights, sounds and emotions of missions he led in Afghanistan to offer readers insight into what soldiers experience.

The night was our best friend - the darker the better as we prefer to use our comparative advantage of night operations to accomplish the mission and safeguard our unit. We do use night vision devices. The moonlight was a part of the operation too. The shadows cast by us, trees, buildings and mountains were sometimes welcome when they protected us by hiding our movements and other times unwelcome when they would give away our locations.

Were all your senses heightened?

Our deployment was a winter one. Missions were bitterly cold. Sitting on the tarmac loading a helicopter before the mission or loading the aircraft during exfiltration, the smell of JP-8 fuel burning and warmth of the engines in our face was a nice and "friendly" feeling on a chilly night!   What was the range of weather in which your eight night raids took place?
Daily temps were always fairly nice (35-50 degrees) during our deployment from October-January. Night raids were bitterly cold! On the ground, we experienced temps of 5-25 degrees with two of them occurring in the mountains with snow as deep as knee level.

How did your bodies feel with a mission in mind?

The body has a type of "game time" feel - a certain amount of heightened alertness and focus. Each mission has a kind of sine curve of emotions though - there are peaks of adrenaline-fueled focus (Example: infiltration phase - landing on the ground and initial movement to the objective location), with calmer lows (long helicopter flight to a far-away objective). These allow us to manage energy throughout an operation.

What were your emotions during the night raids?

This is a mix of excitement, nerves, anxiety, and thrill. The nerves and anxiety revolve around the concern of making the right decisions to ensure the safety of my Rangers and accomplishing the mission.

The paradox of army service (a desire to do our job even though we exist to generate peace) was on display during a deployment: Rangers feel most motivated when we’re able to do our job of taking terrorists off the battlefield. The aircraft we use have maximum weight capacity which limits the number of people that can go on missions. No one wants to be left back at the base on a mission night. So, the stakes are high to earn the right to be “on the mission manifest.” Also, when other impacts hamper our ability to execute missions, the company gets stir crazy! The gym, reading and videogames only keep us occupied for so long!

What does it entail being a company commander on these raids?

As the Company Commander of the entire force, I was the Ground Force Commander (GFC) which brought with it certain authorities and responsibilities. These include weapons release authority for certain munitions that we employ from the ground or using aircraft, decisions on mission accomplishment, and ability to use mission enablers like the partner force (Afghan special operations soldiers), multipurpose canine and others.

Why do veterans choose Gonzaga?
Find out
Share Story