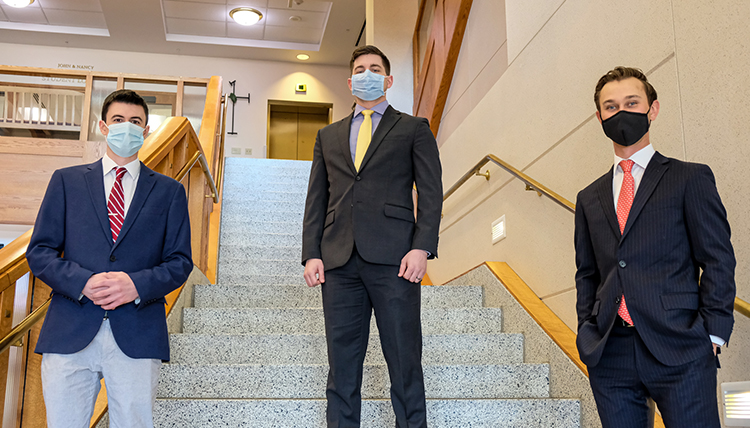 Gonzaga argued against Brooklyn Law School, University of San Diego, University of Alabama, and Notre Dame during the virtual rounds. Students were noted for being poised, professional, and prepared with thrilling argument session performances. According to one judge, “Few practitioners we see bring us this level of preparedness and professionalism. I will welcome you to our court anytime."

Participating in moot court is no small feat, and students devote many months and countless hours to the essential training sessions. This season was Gonzaga’s 25th consecutive year in the Saul Lefkowitz National Trademark Moot Court Competition and is a testament to Gonzaga’s superb legal research and writing program.

"I think I speak for everyone on the team when I say that Saul is both the best and the hardest thing that any of us could have done in law school," team captain Joe Huston said. "It is absolutely a refining fire. But it is a fire that develops a special set of skills – skills unique to becoming a Saul. We write and argue persuasively. We collaborate with and rely on our teammates. We are mentored by one of the best attorneys in the business. It’s been ten months of challenging work, and what we have become is well worth the sacrifice."

“There comes a time each year in Saul, and it differs for each player, where the student surpasses the professor in the knowledge of their subject matter,” self-identified “demanding pen pal” team coach Chris Lynch said. “That day happened with all seven of these students. It is a thrill for me when I become the student again.”