Understanding the Electoral College as the 2020 Presidential Election approaches

What was the original purpose of the Electoral College?

According to Joe Gardner, associate professor of political science at Gonzaga, the Electoral College was a political compromise between the Founders. They hoped this system would allow for “better” presidents by giving “more virtuous” men controlling authority in choosing a president. Ultimately, it was a result of lack of trust in the people. The College also intended to give greater independence to the executive branch. In slave states, this system was supported because it gave them an advantage in selecting presidents due to the 3/5ths compromise. Otherwise, a large portion of their population wouldn’t be accounted for in a popular vote election.

How is the Electoral College designed to work?

Each state has as many “electors” in the Electoral College as it has representatives and senators in the U.S. Congress. When citizens vote for the presidential election, they are telling their states’ electors how to cast their ballots. After the popular vote of each state is certified, the winning slate of electors, chosen by each state’s political parties, meet to cast two ballots – one for vice president and one for president.

Why is there so much confusion around it?

People are confused about it, because, “It is confusing,” said Gardner.

He admits that even political scientists have trouble explaining it. The College never operated as an independent body, as the Founders intended, and was quickly encompassed by the states’ political party that passed legislation giving each states’ dominant party greater control over the selection of electors.

“There is a disconnect between how it might work on paper (in the Constitution) and how it operates in practice,” said Gardner.

The U.S. Constitution doesn’t require state electors to vote in accordance with the popular vote. “Faithless electors” are those who vow to cast their initial ballot one way, but then end up voting another way despite the results of the popular vote. As troublesome as this may seem, this aspect has not caused problems with the Electoral College.

Gardner states this has nothing to do with faithless electors but instead results from “accounting errors” at the state level when converting popular votes into Electoral College votes.

The “winner takes all” system, said Gardner, “produces results where a candidate can win some states by very large margins, lose other states by very narrow margins, and end up both winning the popular vote and losing the electoral college vote.” 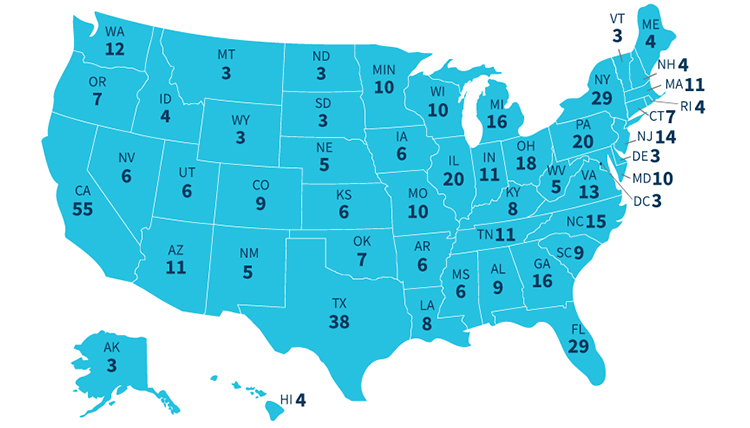 A map provided by USA.gov, reflecting each state's number of electoral votes

So … does my vote matter?

If you’re worried about the Electoral College electors violating the popular vote, don’t be. They’ve never exercised independent judgment so voters shouldn’t be concerned about that according to Gardner.

The best way to make sure your vote matters is to vote! Not only is it a civic duty but our democratic system only functions if we all fulfill that duty.

“The more people vote, the more confident we can be that the results reflect the will of the people,” said Stacy Taninchev, professor and chair of Political Science department at Gonzaga.

While nobody’s singular vote makes all the difference on its own, if everyone decided not to vote, there would be no election and no democracy.

What is the most important factor in the 2020 election?

Taninchev believes that preserving democracy is a fundamental issue to be aware of during the upcoming election.

“While there are many important issues at stake and candidates on both sides take different positions on those issues, the result and aftermath of this election could be more important than past elections in either preserving or further eroding our democracy,” said Taninchev.

After all democracy is the core of the country and without it, the nation is likely to see increased violations of citizens’ rights as policy is made in the interest of a small group of people with power.

By participating in our democracy and casting ballots, citizens demand that elected leaders uphold democratic processes and protect human rights.