Listening to the 'Motions of the Soul'

We make decisions that change our path in unforeseen ways

The Aurora Borealis hovers over the Columbia River in Eastern Washington (Photo by Craig Goodwin).
|
Jeff Bunch ('92)
Share Story
Discernment (noun): dis·cern·ment | \di-ˈsərn-mənt, -ˈzərn-\ 1 : the quality of being able to grasp and comprehend what is obscure : skill in discerning 2 : an act of perceiving or discerning something

Where should I be serving? What should I be doing? Why am I no longer satisfied by something I once loved? Where does God want me to be?

Those questions, for some of us, are an endless challenge. The process of discernment, or even just searching for a sense of direction, can be one of mystery – sometimes profound and satisfying, sometimes painstaking and confusing.

Saint Ignatius of Loyola referred to these elusive musings as the “motions of the soul.” They are the reason he developed the Spiritual Exercises and Examen centuries ago. The set of principles behind them, particularly the skills needed to focus the mind and soul in times of discernment, are timeless. Some would say they are even more vital today in our distracted world.

“Discernment involves pausing before we act. Stepping out of the busyness of our culture. Reflecting on where God is working in our lives. And, ultimately, trusting and going into the unknown.”

We make decisions large and small throughout our lives, knowing each one of them may change our path in an unforeseen way. The anguish and the beauty of these moments is we can’t always divine the outcome. We make the best decisions in the moment, hoping for the best. In that sense, discernment is something we all do, oftentimes in an unconscious way.

To explore this more, we reached out to members of the extended Gonzaga Mission & Ministry community for their points of view and experiences. These testimonies aren’t a comprehensive primer on Ignatian discernment, but unique journeys of personal discovery and inspiration. 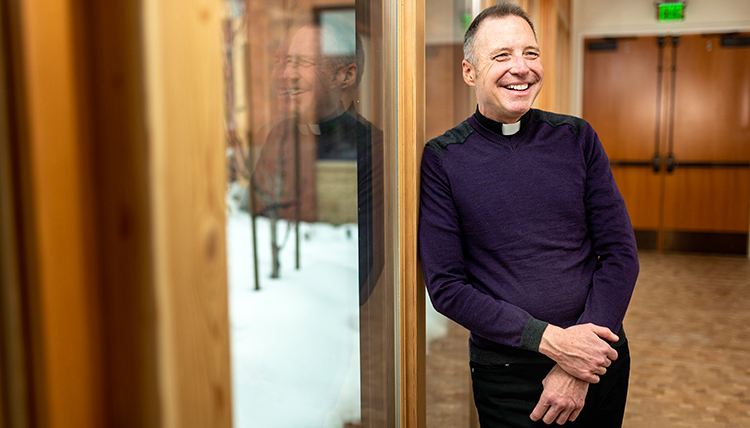 At the core of discernment is the goal of trying to determine where God is at work in our lives.

“There are different facets to discernment,” says Father Stephen Hess, S.J., Gonzaga’s alumni chaplain. “In one sense, it’s a way we go about making decisions or leading our lives. It’s more of a process, something that we continually do, to make choices in a way that we normally wouldn’t.”

Even Ignatius recommended the common approach of compiling a list of pros and cons as one way to navigate complicated decisions. But what became known as Ignatian discernment has touchstones with the principles of reflection, consolation (closeness to God), desolation (distance from God), and confirmation that compel us to listen to God in a variety of ways.

“It involves paying attention to our inner feelings, to our experiences, praying, and talking with other people, and then bringing that all together as a way to inform a decision,” says Fr. Hess.
Ultimately, he says, discernment is paying attention to those things and asking, “Where is God leading me? What brings me closer to God? Where is God at work in my life?”

“The answers may be unexpected,” says Fr. Hess. “That’s why it’s so important to be reflective and be open to the Spirit. We learn things about ourselves or our lives that we may not have seen before.”

Ignatian discernment also assumes an ongoing conversation. One can’t jump in and out of the process. Fr. Hess works with many Gonzaga alums through all phases of life and sees a hunger to be discerning about their lives. He has seen myriad examples of paths altering in unexpected but satisfying ways where discernment of God’s will was at the center. 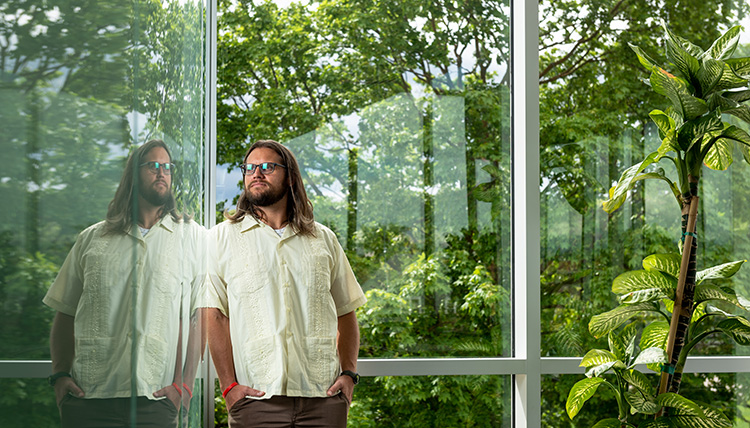 Kyle Baker, S.J., was a star student-athlete during high school in north Idaho. His talents took him to nearby Carroll College in Helena, Montana, a small but mighty Catholic institution where he continued to excel. Baker appeared to be on the fast track of higher education success as he rose from Hall of Fame athlete to staff member in Carroll’s administration after graduation.

That’s when another plan started revealing itself to Baker, who felt called to become a Jesuit in a world where that choice is more challenging than ever. As a Jesuit Novice, he spent a year working at Gonzaga with students in the Mission & Ministry office – a provincial assignment he found rewarding and impactful.

Baker continues to discern God’s will, even while making lifetime commitments to the order and completing missions that wouldn’t normally be his preference. As an example, his current assignment as a Jesuit Scholastic to study philosophy at Fordham University in New York City is a challenging season in his journey. Yet while the details of his future may be uncertain, his regular practice of discernment affirms his calling.

“I’m ready to say I want to commit to this life,” Baker said on a return visit to Gonzaga. “It’s about holding your hands open, physically and spiritually. The stillness and silence needs to be there. It’s putting yourself in those open hands and saying, ‘Where is God in this?’”

His example left a mark on those he walked with at Gonzaga, a constant reminder that, as he says, “God really loves you, tenderly and lovingly. You need to recognize that and walk deeper into that love.”

Hailey Maher (’19) attended a Jesuit high school in Western Washington. Yet the dynamic Mission & Ministry student leader thought she would attend a “big name” college in the East. She visited those schools before arriving at the last consideration on her list – Gonzaga – where all her favorite high school teachers attended.

“I feel like maybe that journey was a discernment process that I didn’t realize,” said Maher. “When I was at other schools, I just didn’t feel peaceful. I felt anxious. When I came here, I felt peace about it. I wanted to be in a place that fostered people to become who they are meant to be.”

That “gut feeling” is a hallmark of Ignatian discernment. Maher listened to it. She has thrived at Gonzaga over her four years, where colleagues describe her as having “the soul of a Jesuit.” Maher deflects the compliment, although she studied Ignatius and led a session on discernment in the “Jesu-What” series on campus last fall.

Maher finds herself again seeking direction as post-graduation decisions loom. She plans to attend graduate school, but has many options, so she relies on the Jesuit concept of leaning into and embracing the tension.

“Giving myself the time and space to (discern) – that’s been hugely helpful,” says Maher, who hopes other seniors who are struggling with plotting their futures will similarly find their way. “Listening to something inside of us, that’s what God calls us to do, is really a gift.” 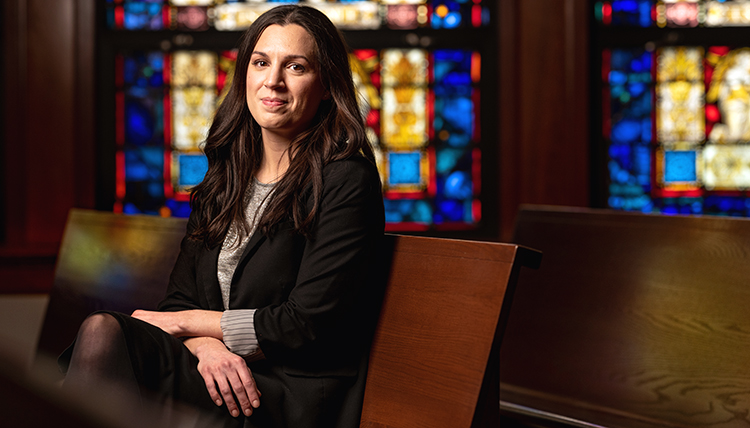 Michelle Wheatley (’07, ’12) was a gifted student leader — an RA who helped plan student events one month and orchestrated spiritual retreats the next. Today, she is acting vice president for Mission & Ministry, a post she assumed in 2018 during a challenging time in the University’s life.

Wheatley has a deft command of Ignatian discernment as a Doctor of Ministry and used those skills to lead Gonzaga through a two-year organizational Examen process in which the University reflected upon its ongoing foundational commitment to Catholic and Jesuit identity and values.

It’s an example of how discernment principles apply to modern organizational leadership in much the same way as they do to individuals. The Examen process has posed fundamental questions to the Gonzaga community:

“It’s the idea of naming purpose and then aligning decision-making with it,” says Wheatley, whose role as facilitator of the effort provides her with a unique point of view.

The University has encouraged broad-based input from stakeholders in the discernment process. Wheatley says it takes courage and trust for those in an organization to be vulnerable and open for the betterment of the whole. The outcome often creates a serendipitous connection between individuals’ personal and professional lives.

“In an organizational space, we want to know about your interior life; it actually has an impact on bottom-line decisions we’re going to make,” says Wheatley. “It’s a massive integration, which is a hallmark of the Ignatian way, of the spiritual and the secular.”

Wheatley says the essence of discernment is rooted in loving relationship with God. “The real question at the core of a discernment is, ‘Who is God and what is God doing here?’ It’s very central to the Jesuit understanding that God is moving and doing things, especially to heal the world — and how can we join that?”

Support Gonzaga's work on discernment and other areas through your gift.
Give Now
Share Story

Listening to the 'Motions of the Soul'

'When God Made Barney'