Angela Jones’ diverse and profound career journey ushers her to an unexpected destination – a landmark role as the chief executive officer of the nonprofit Washington STEM.

Jones ('16 J.D.) was interested in STEM (science, technology, engineering and math) fields while growing up, but wasn’t sure how she might pursue that path. She was sure, however, of the calling to embrace and advance her role as a woman of color. The underlying themes that inspire Jones’ work are ingrained in those experiences.

This drive animated Jones’ 25 years of professional experiences, which revolve around passion, service and leadership. She fosters a strong belief in building community through sustainability and generational growth through access to education.

Her leadership portfolio spotlights 15 years in higher education and seven years in the Spokane K-12 public school system. Distinctively representative of eastern Washington, her academic path culminated in a J.D. from Gonzaga School of Law after a master’s from Eastern Washington University and undergrad degree from Washington State University. Those connections make her an ideal leader of Washington STEM, which is based on the west side but endeavors to create equity across the state.

Originally from Mountlake Terrace, Washington, Jones was a motivated resident of Spokane for 30 years before returning to the westside for her new role. At its core, Washington STEM creates solutions and partnerships that bolster educational opportunities, especially for students often underrepresented in these fields.

Of the 10 regional networks in the state, the Spokane network is one of the older ones; however, Jones’ team hopes to continue growing its influence, through stronger partnerships between Spokane K-12 classes and community organizations like Avista.

For its part, Gonzaga has continued strategic efforts to build up its STEM programs. Construction of a transformative Integrated Science and Engineering facility is underway.

Jones believes offering STEM majors with a liberal arts background is an asset to not only Spokane, but Washington at large.

“I love the idea of the cross-disciplinary approach. That’s the way we’re actually going to resolve the issue, not say we’re only going to focus on engineers,” Jones said. 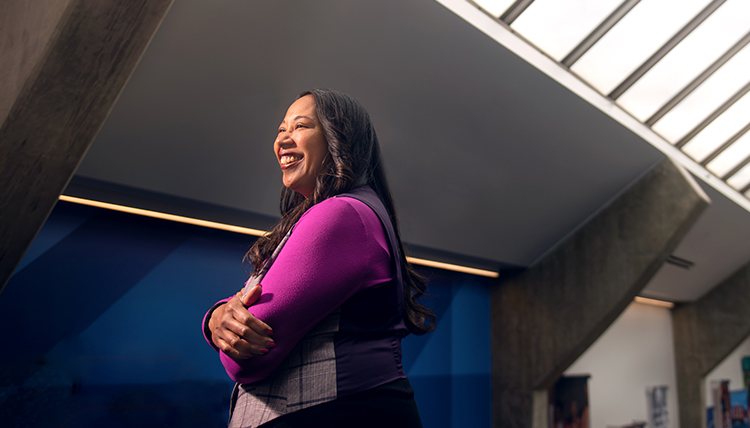 While at Gonzaga, Jones balanced strenuous law school studies with dedicated involvement as a student representative for Gonzaga Law on the Minority and Justice Commission, an active member in the Black Student Union, and the diversity chair for Gonzaga Student Law Bar Association.

Despite being one of the oldest students in most of her extracurricular activities, Jones embraced opportunities to connect with campus life in a way that complemented her law school emphasis on equity. That orientation revolved around understanding ways to create equal access to opportunities for all people, and learning how to do so as a lawyer.

Today, those experiences ground her vision for Washington STEM, which seeks to provide Washington students equity through access and opportunities for students in rural communities, students of color, women, and students living in poverty.

“By 2030, about 67% of jobs in Washington will require some type of STEM-related credential, whether a two year of four-year degree,” says Jones. “If folks want to have family-sustaining careers, then we want to make sure they have an opportunity to compete.”

The journey has taken Jones back to her starting point. While she ultimately pursued degrees in English and communications, she always had a passion for microbiology. However, she didn’t have access to the systematic supports that other students had.

Washington STEM aims to provide early interaction for children like Jones, who lack the proper foundation to succeed in these areas of study. The organization has supported more than half a million Washington children ages 0 to 8 through partners in the Washington Early Math Coalition.

“At Washington STEM we focus on early STEM. What do you do in preschool? What does math and science look like to a preschooler?” says Jones. “We’re using it constantly in every facet of our lives. That’s a piece that I was missing.”

In her own words: Read Angela's "All You Need is Love" on our To Be Continued blog.

The Role of Faith

The opportunity to lead this organization is a perfect fit for Jones, a dynamic and collaborative leader with a unique set of gifts. With Jones leading this catalyst for change, one might ask: What ignites her spirit? To put it simply, the answer is her faith.

“It’s the only way for me. I don’t make moves without talking to God. That’s a big piece for me,” says Jones.

Jones’ passion for creating equal access to opportunities, coupled with her faith, inspires her every day. Had it not been God’s guiding voice, Jones would not have left the comfort of Spokane to relocate to Western Washington for her new calling.

“My very first day on this job, my parents – who have a very strong faith – said as I was leaving, ‘Let them see Jesus in you!’ I told my staff, ‘Okay, my mom gave me a directive as your new CEO that I need to let you see Jesus in me,’” Jones jokes. “It’s a good reminder because we are human, which is why I believe I have to stay on the path that God has built for me. That’s the absolute thing that leads my life.”

Jones’ first and foremost mentor is her father. After coming out of segregated Arkansas, he sought to make a better life by joining the Navy. He was a powerful motivator in her college journey, constantly pushing her to persist through any personal or systematic obstacle. She says becoming a lawyer and a CEO is the culmination of all the hard work that her family has put in to get her to where she is today.

“It’s not a brag point, it’s humbling because everybody who came before me in my family helped me to be able to sit at the table, and have it be my table, quite frankly,” says Jones.

After attending undergraduate and graduate school at public institutions, Jones found it refreshing to be immersed in a faith-based community like Gonzaga University.

“…To go to an institution where it is in the very fabric of how we learn, how we do outreach to communities, it just felt like the final piece of my homecoming in my education,” says Jones.

No doubt, the legacy Jones is building has a foundation on love, because, she says, “Everything I do is because of God’s love for me.”

All You Need is Love

Grads Shine with Many Gifts

Jacob H. Rooksby Reappointed as Dean of School of Law