Holding On To Hope

At Gonzaga, three of four deans hired this year are women, and a female provost leads all academic and student life departments. But mission and ministry – which some consider to be the area responsible for tending to the spiritual life of the university – has nearly always been under the direction of a Jesuit ... right up until 2018 when President McCulloh asked then Associate Vice President for Mission Michelle Wheatley, D.Min., to be acting vice president.

In December 2019, McCulloh named her vice president, removing the "acting" portion of the title, saying:

"It is my belief that our community is extraordinarily fortunate to have Dr. Wheatley serving in this position and that she will continue to lead and guide Gonzaga’s efforts in the development and support of programs that meaningfully contribute to our understanding of mission fulfillment as a Catholic, Jesuit and humanistic university.

In coming to this determination, I conferred with many people within our community, and discussed her candidacy formally with the Jesuit Board of Members, Faculty President, Staff Assembly President, Cabinet and Trustees. The support for Dr. Wheatley continuing in this role on a regular basis has been overwhelmingly positive."

Here, Michelle shares her history, vision, challenges, and the moments that give her hope.

Is it tough to fill a role that has nearly always been occupied by a Jesuit?

Yes and no. For those who expect priests to be the leading animators of our mission, it can be challenging to imagine a woman, and a young woman especially, in this role. I distinctly recall a time when a person came to our of office and asked to speak with the vice president, and then was visibly disappointed when I appeared. And it’s not uncommon, if I’m presenting with a Jesuit, for participants to direct their questions to him. Or for me to be the only woman in a certain context or meeting, which can be challenging.

In those moments, I draw on my courage and sense of call, as well as the part of me that gets energized by needing to earn trust and deliver results. I also try to show compassion for the grieving that some experience in this shifting landscape. And I recognize that my presence in this role shows new opportunities for leadership for women and means a lot to many members of our community, who have given me tremendous support. The most important thing to remember is that no one person carries this mission alone – it’s too big. We are at our best when we share this responsibility, and when we ultimately trust God to guide us.

What did you learn, stepping into this role during a difficult period at Gonzaga, as the sex abuse crisis in the Catholic Church impacted our campus community?

I felt like I was where I was supposed to be last year, as hard as it was. I’m conscious of the pain in our community as we faced the realities of sexual abuse in the Catholic Church in new ways. But I’m also conscious of the great potential of using our resources to shape a more just and humane world.

I’m so grateful that we were engaged in our Mission Priority Examen (an organizationwide assessment) at the same time because our community was actively growing toward greater shared responsibility for our mission. People were paying attention and engaging in conversation. We discovered a new sense of strength and depth in this time of adversity.

What was your journey to this role?

At Jesuit High in Portland, I started spiritual direction, and explored Ignatian Spirituality. I didn’t necessarily think my life was going toward mission leadership, but looking back, I see a thread. When I came to GU, an internship morphed into a professional role and my path unfolded from there. (She received a bachelor's in public relations in 2007 and a master's in religious studies in 2012.)

I experienced a sense of confirmation and vocation, so I took on greater responsibility when I could, looked for opportunities for mentorship, continued my education, worked hard, built relationships, and tried to stay strong, adaptive and present. 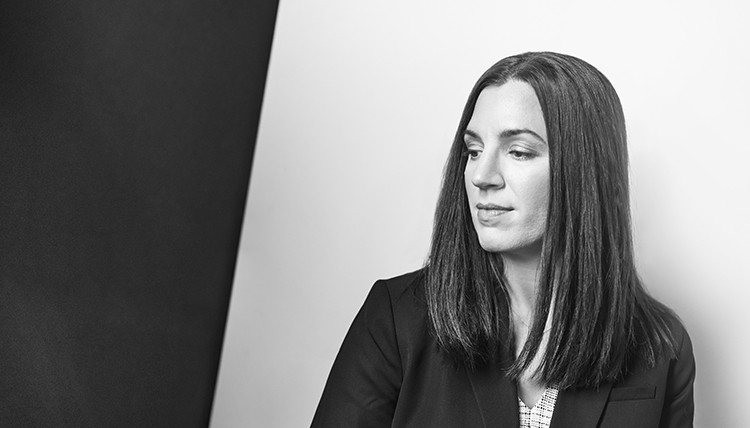 What is your vision for Mission & Ministry?

In working with our faculty and staff, it’s a coherent (though complex) sense of who we are and what we’re here to accomplish together; a deeper understanding of Jesuit, Catholic values and where we may encounter tension; and continuing to develop as a place where people thrive as they manifest this mission in a diversity of ways. For students, it’s about preparing to leave this place as good, competent, compassionate people, to share abundantly the gifts of their Gonzaga education. We hope to say with confidence we’re sending them out to be forces for greater good in the world, and hopefully part of that is because they’ve been part of a transformed community here. How cool is that?

How do you address the tensions of not being “Catholic enough” or being “too Catholic”?

We will always encounter this tension because people point to different identity markers to assess whether and how well we embody our mission. Right now, I think we need more opportunities to engage in this conversation and more exposure to models and expressions of Catholic identity.

What’s on the horizon for Jesuit schools as a whole?

It’s a new chapter as the Jesuits themselves discern their mission priorities and involvement in higher education. We have been asked to explore collaboration throughout the Jesuit network, especially in promoting discernment and the Spiritual Exercises, walking with the excluded, journeying with youth, and caring for the Earth.

Of the 27 Jesuit universities in the U.S., Jesuits hold the chief Mission & Ministry leadership role at 14 schools and lay men (not priests) lead at 4. Women take up the reins in 8 universities, including Gonzaga.

What makes you hopeful about the mission at Gonzaga?

I’m convinced that the Holy Spirit is doing something special here. So much is emerging right now – new leaders, initiatives, relationships, possibilities, energy. These are signs of God’s abundant love and accompaniment.

Have a question for Michelle?
Email us
Share Story