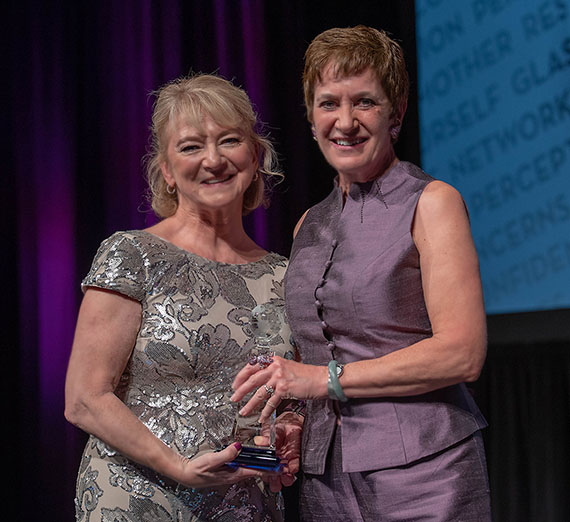 On a cool October evening in Minneapolis, the attendees of the 2018 Society for Women in Engineering national conference banquet cheered loudly when Gail Heck-Sweeney (’74) was called to the stage. The Gonzaga engineering alumna stood with SWE’s president and accepted a Global Leadership Award, recognizing a long ongoing career as a multinational manager and role model to women engineers.
Afterwards Gail thanked Gonzaga for transforming her from a rural Montana teenager into a confident engineer with an appreciation for the world’s great diversity.

“Graduating from Gonzaga University’s engineering program opened up doors that have allowed me to live and work in six different countries with the most creative telecommunications engineers,” she said. “In building engineering teams, I continue to learn there are many different ways to view a technical issue and the world in general. I am humbled to receive this award and move forward with even more curiosity.”

Gail first learned about Gonzaga at a “career night” presentation in Havre, Montana for the region’s high school students.

“Raise your hand if you’ve taken two years of math,” said the gentleman at the front of the group. Most students raised a hand. “Keep it up if you’ve had three years of math,” he continued. Several hands dropped. “Four?” Still more hands went down. By the time he asked who’d also taken chemistry, only Gail’s hand remained in the air.

Afterwards, he approached Gail and asked if she’d ever considered engineering. “You mean drive a train?” she exclaimed. The man then encouraged her to consider a career as the other sort of engineer.

He gave her materials about what was then known as Gonzaga’s School of Engineering. Until that moment, Gail had always thought she’d become a teacher, perhaps in physical education or typing, though she much preferred helping her father on the farm to staying inside or at a desk. That career night in Havre became a major turning point in determining Gail’s future.

She walked into her first class at GU and found herself in a room full of male students and only one other woman, who was sitting in the front row.

“It was a little intimidating at first,” she recalled. Gail quickly turned the gender disproportion to her advantage. “I’d cut the other engineers’ hair to get spending money,” she explained. “At that time, there were many international students who weren’t familiar with the area, so I was their barber.”

Her liberal arts education, in addition to her technical engineering studies, provided her an appreciation for the great diversity in the world. Additionally, she found opportunities to volunteer and serve through her involvement in Spurs and as a resident assistant and director; she built lifelong friendships with her classmates and professors, and discovered a confidence that truly opened doors.

“I soon realized I could do anything I wanted,” she said. “I came here having never been on an airplane, I’d never seen anyone from China, India or Japan. By my senior year, I didn’t even have to sign up for interviews—companies were coming to me.” What she wanted, she decided, was to expand her environmental engineering degree with an MBA from another Jesuit institution, Santa Clara, and work with Hewlett-Packard, a leader in scientific, business and industrial technology. 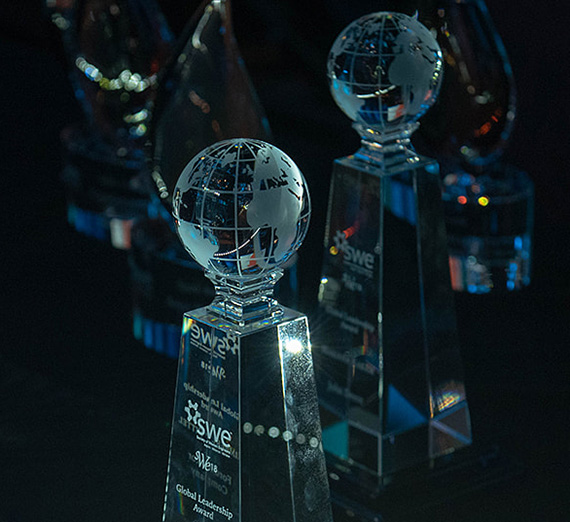 Over a span of four decades, Gail’s career has taken her around the globe: managing a product line in Scotland; overseeing marketing across Europe, the Middle East, Africa, and Asia; leading a major acquisition in Spain. She is presently the director of worldwide solution partner and rental channels – responsible for maintaining a network of strategic partners around the globe – for Keysight Technologies, a leading electronic measurement company.

“Gail’s ability to bring people together, continuous development of herself and others, and passion for diversity set her apart from the rest,” read a company announcement of the SWE award. “She champions women in leadership by actively participating in company and external organizations that encourage diversity in business and engineering. She’s also a regular panelist at Keysight’s Women’s Leadership Panel, Keysight Leadership Network, and Emerging Leaders Program events, sharing her experiences as a leader.”

During her eight years living in China as the general manager for Agilent China Communication Operation , she says she tapped into a different area of her Gonzaga education: the humanities and the Jesuits’ ideas of caring for the whole person (Cura Personalis).

“They expected a great deal of management,” she explained, “my role was very involved with their lives as well as their growth in the company. They’d ask, ‘what is the purpose of my life?’ I just wished I could send them all to Gonzaga for four years!” She did the next best thing: pursued certification as a professional career coach.

It’s not much different from her extra-curricular activities at Gonzaga. During the early 1970s, women on campus began to speak up in discussion groups. A Gonzaga Bulletin article of the time credits Gail as one of a half-dozen of organizers of events such as the Future Leaders of Gonzaga seminar, and notes her contributions as an engineer in training, a residence hall director, and member of the Spurs service organization. Her graduating class named her as one of 34 “Outstanding Students” and she soon received a distinguished alumni award.

In Touch with Gonzaga’s Present and Future

Gail continues to pay attention to the goings-on of both Gonzaga and the present-day School of Engineering & Applied Science.

“I see notes from advisory boards in SEAS, and I’ve kept up with my engineering class and groups of friends,” she said. “Fr. Spitzer (former president of Gonzaga) was in my class.”

Looking to the future, Gail sees much of what she received from her own Gonzaga experience as central to the success of tomorrow’s engineers.

“Gonzaga always put the emphasis on the students,” she recalled, “and that’s going to be critical moving forward.” She also has high hopes for growth in the STEM fields. Gail also has a vision for continued, improved diversity—particularly with respect to women in the field of engineering.

“There are more women in engineering now compared to when I was in school,” she said. “I think it’s something we can work on in our culture, keeping these paths open, letting girls know engineering is an option and encouraging them to explore it.”

Thankfully, it took just one evening in Havre, Montana, with one person there to encourage her, to allow Gail to explore and succeed as an engineer.

MORE ABOUT SWE AT GONZAGA