Yes, Kellogg works at SpaceX for its iconic billionaire founder, Elon Musk – and he could answer in the affirmative if asked rhetorically, “What are you, a rocket scientist?”

However, Kellogg (’14, mechanical engineering) is the first to admit his work is more a labor of love. The field of engineering is all-immersive for those who are called to it. That is how Kellogg approaches his passion. As a collegiate mentor of his puts it, “Ryan doesn’t really sleep a lot.”

Kellogg wouldn’t have it any other way. In a given week, he may be field-testing in central Texas, trying to solve an engineering problem in Los Angeles, or spending time back home. Kellogg is a homegrown success, attending Gonzaga Prep and following a path to Gonzaga. He remains connected to both Jesuit institutions, giving back to the schools and their students. 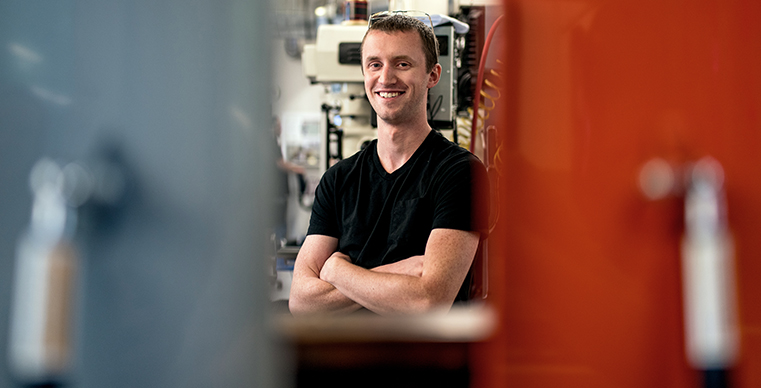 During a recent vacation with family at the lake, Kellogg spent a large balance of his time in the mechanical engineering lab on the Gonzaga campus that was his second home during college. Kellogg helped current students to learn machining techniques, navigate complex software applications, or apply industry-tested insights to engineering problems. Kellogg also made time speak with students at G-Prep, in hopes of inspiring the next generation. All of it clearly emanates from the core of Kellogg’s heart.

“When I came to Gonzaga, the tagline was ‘Be Inspired,’ ” he says. “That core was great because if you can be inspired by what you’re doing, it’s so much easier to learn it, to do it, to push through it. So, when I come back, there are generally two things I’m trying to do: get the students excited and to push them beyond what they’re doing.”

Kellogg is merely paying forward what he learned firsthand from fellow Gonzaga alums who came back to mentor him. Beau Grillo, manufacturing support engineer in the Engineering lab, says Kellogg was part of a group of students who tried to improve the school during their time. They developed new lab processes and worked on a plan to acquire proper equipment.

Kellogg and his classmates didn’t see the benefits of their efforts, but that didn’t matter. It was about leaving the place better than they found it. Kellogg believes the ideal dynamics of a university require equal stewardship and accountability from faculty, administrators and students.

“Ryan’s always been a little higher level,” said Grillo. He says Kellogg’s gifts were apparent to those in the industry as he worked locally during college before landing a position in the highly competitive environment of SpaceX. Grillo says Kellogg’s return visits to GU mean a lot to current students. “He’s only four years out of college, so these kids aren’t too far out of his realm. He likes giving back, talking to the kids, talking about design, talking about propulsion.”

During a recent visit, Kellogg helped students navigate complex drafting software, a scenario which is common in the field. Gonzaga aims to prepare students for such situations, but it’s a tedious, hands-on process. Kellogg says mastering the foundational skills of mechanical engineering requires persistence and attention to detail to produce high-quality parts that make up the greater whole.

“Getting good at that requires iteration. It’s how the human brain learns,” says Kellogg. “As a designer, you need to think about the rest of the process. How will it be built? How will it be tested? If you can tell people about real-world examples and get them excited, tell them about real-world industry failures, every single one of those things is learning. You get better when you fail.”

Kellogg says sharing those learnings are how engineers more quickly excel in the profession. He stresses to students that the GU lab provides a safe environment to learn those lessons. He is a firm believer that gaining knowledge in the classroom is only part of the equation for success.

“The reality is, you have to do so much yourself,” he says. “It’s cool for me to come in and say, ‘This is where the industry is now.’ The reality is that the problems they are going to solve in their professional careers don’t exist yet. So, it’s really inspiring to see them learn the fundamentals of problem solving and getting out there and push it.”

Kellogg can’t speak specifically about his work at SpaceX, but content on the company’s public website connects the dots between the type of propulsion work Kellogg does with rockets and missions that could change the course of humanity. Musk’s stated company mission is to help people colonize Mars. The company has already done work that supports the Space Station and is a federal government contractor lined up to transport the next generation of astronauts.

Kellogg says he enjoys working at SpaceX and has no idea where the rest of his career will take him. In the Jesuit tradition, he’s focused on going forth and setting the world on fire. At its core, engineering evolves around the idea of solving real-world problems to benefit society.

“None of us want to learn all of this just for the sake of learning,” says Kellogg. “In order to do that, you have to be able to take these things that we’ve learned as humanity and turn them into things. … It all comes from learning from the previous generation and making it better.”