If you have ever dropped your phone on the hard floor of the Law School’s foyer and sighed with relief when you found it still intact, you might just have a fellow Zag Law alum to thank. Jim Parke, (JD, ’06), is the current CEO of Otter Products which owns OtterBox, a leader in the design and manufacture of cases that protect your cellular loved ones. Along with serving as CEO to Otter Products and OtterBox, he is the CEO of Blue Ocean Enterprises. Otter founder Curt Richardson created Blue Ocean to develop and mentor start-up and early stage companies and makes strategic investments in real estate.

On Friday, January 26, 2018, Jim Parke returned to Gonzaga University School of Law to speak about his path from law student to CEO of a global corporation. As CEO of the three entities, Parke brings to life the vision and mission of the companies’ founder Curt Richardson. That mission: “We grow to give. To whom much is given, much is expected.”

According to Parke, Gonzaga Law is where it all began. “The relationships you create here may lead to future opportunities,” Parke explained to students, adding, “so don’t burn any bridges.” One of Parke’s first tasks after becoming Chief Legal Officer at Otter was to build a legal department: “I called up an old classmate.”

Though Parke’s deep understanding of corporate law and finance has helped drive strategic development throughout the years, Parke said—as either a law student, partner, in-house attorney, Chief Legal Officer or CEO—his professional success can be attributed to exercising empathy. “Leadership becomes easier if you lead from a place of empathy,” he said. “People like to feel that they are understood.” 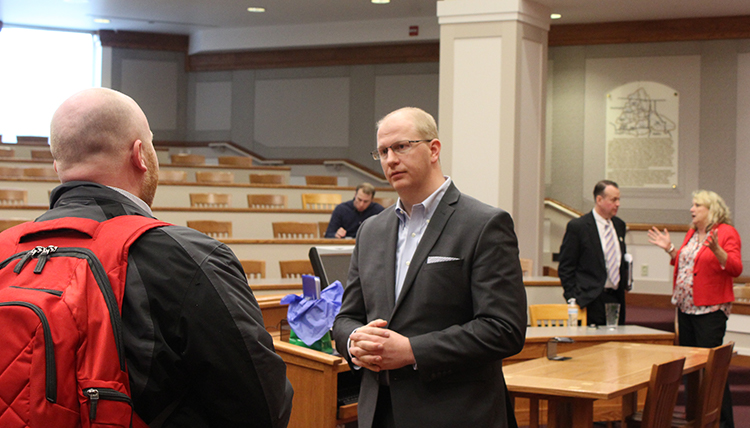 Parke’s commitment to empathy is driven from his personal faith, his family, and his education at Gonzaga Law, which teaches the Jesuit tradition of ethical values, substantive knowledge, servant leadership, and practical skills. “Your integrity is attacked every day,” Parke said after telling stories of attempted bribery and other ethical dilemmas. “At the end of the day, you need to be able to look at yourself in the mirror.”

When asked if he would do anything differently, Parke responded that he wished he took a class in intellectual property at Gonzaga Law, stating that as a CEO of a company with 55% market share in the U.S., he would have been better prepared for patent and counterfeit challenges.

But Parke asserted that, overall, he has no regrets, and that Spokane remains one of his favorite places he has ever lived. “If I had to do it all over again, I wouldn’t pick anywhere other than Gonzaga Law.”