We arrived in Brighton in the wake of our first few wild weeks in London.

My first two weeks in London — and those that followed — flew by in a wonderful, busy blur. Our group of 11 GU English majors had settled into our small flat at the top of too many stairs in the heart of South Kensington. We had learned to navigate the tube (public transit) on our own and discover the world of possibilities (namely, coffee shops and parks) that were open to us, if we were willing to endure the often packed and sweaty stations. We engaged in class discussion surrounding our reading of Shakespeare and studying London as a text – and then, with informed and curious minds, we went to experience it firsthand via museum hopping with professors-turned-tour-guides, or standing to watch a Shakespeare production at the Globe for three hours, twice.

In those first two weeks, I often thought of the overused Samuel Johnson quote, “When a man is tired of London, he is tired of life.” I found this promise, printed on every flier for this program, to be overwhelmingly true. The complexity of London culture and the opportunity to observe and engage in it was thrilling. It was also draining. I was in fact, tired of London.

After two weeks of brilliant overstimulation, Zack, Maddie, Makayla and I boarded the southbound train headed to a place where we hoped we’d find peace and freedom, even just for the day.

It’s fitting the four of us arrived on the pebble shores of the beach town, Brighton, a mere hour train ride from our bustling city, when we did. Not only had we hit a point of cultural exhaustion, but our class discussions the week previous surrounded the 16th century courtier’s longing for the simplicity of the shepherd’s life. Free from the drama of the court and full of the beauty of nature, the image of the Pastoral was a fantasy held by many in this period. After visiting Hampton Court Palace, in class we discussed the roots of this idea, and how it manifested itself in literature, specifically Shakespeare’s As You Like It, which we had just read and were preparing to see at the Globe. Our hearts and minds were ready for a Pastoral of our own.

Whatever expectations we had of Brighton, they were far exceeded. We arrived on a beautiful day full of blue sky and sun. We made our way through the narrow streets dotted with playfully painted houses toward the tourist town’s center. We recognized a cute place called “The Breakfast Club” from an earlier jaunt around the Angel neighborhood in London and decided to stop in. We were met by retro décor, classic American music, and the announcement that it was their opening day, so everything on the menu was half off. Accustomed to overpriced London food, we ordered big breakfasts from our nervous waiter with long hair and tan skin. We secretly deemed him our British surfer and laughed when he was kind to us when we ordered eggs the American way.

Filled with food and with a childlike abandon, we ran toward the beach. The wind rustled our hair and we stared out at the pale turquoise before us, made perfect under the glow of the sun. After a few pictures and letting the wonder of the day sink in a little more, we made our way to the Brighton pier. In our freedom that was half childlike wonder, half new adult independence, we made a beeline for the roller coaster, passing an arcade and dessert stands along the way. We paid too much to fly above the blue Brighton water, and it was worth it.

After wandering through Brighton’s book shops, our perfectly Pastoral day came to a close in the back garden of Blackbird Tea Rooms. In awe of it all, we devoured our afternoon tea, cake and scones and marveled at the green surrounding us and that verdant life which was taking root in us. Kissing our colorful houses goodbye, the four of us headed back to the train station and back to our hectic, happy London lives. 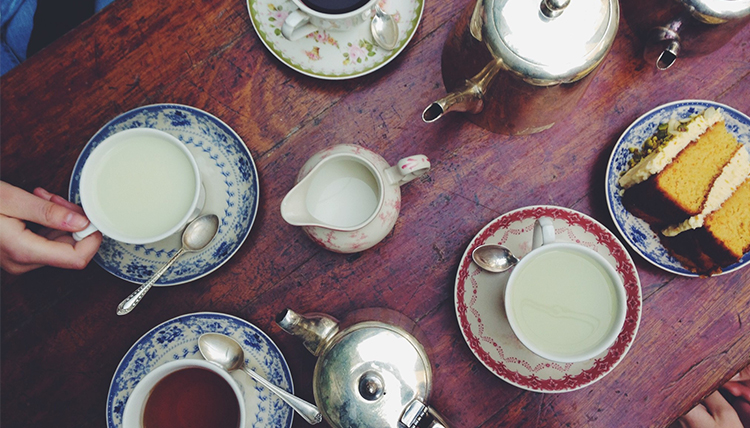