SPOKANE, Wash. – Gonzaga University’s Center for Climate, Society and the Environment has launched Spokane Beat the Heat, a multiyear program aiming to identify, assess and implement local strategies to mitigate the threat of urban heat.

Helping to kickstart the longer-term partnership effort is funding from the National Oceanic and Atmospheric Administration (NOAA) to map “urban heat islands” this summer and increase residents’ safety during extreme heat events. 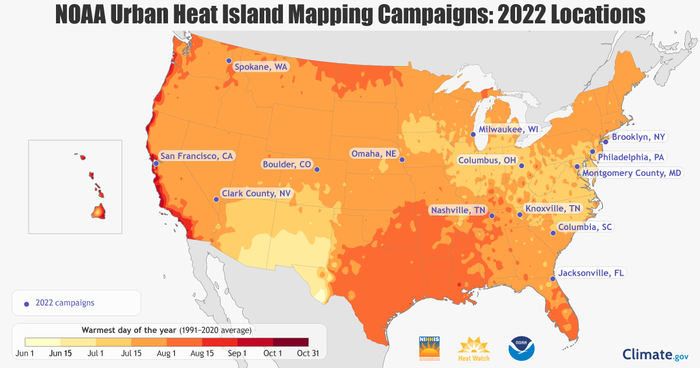 The effort to join the Urban Heat Island Mapping program is a result of fatalities during last summer’s lingering “heat dome” over the Inland Northwest.

Brian G. Henning, director of Gonzaga’s Climate Center, sees Heat Watch as part one of a multiphase project to address extreme heat in the region. A generous local donor has offered $10,000 in matching funds to further advance Spokane Beat the Heat. This summer’s Urban Heat Island mapping campaign will get it all started.

“This will allow us to obtain sensitive temperature equipment and then work with ordinary folks, in what is often called citizen science, to go around town driving a route and measuring the heat in different areas,” Henning said.

“CAPA Strategies will then take that data and create high resolution maps of ‘urban heat islands’ or areas with higher temperatures, often due to less tree canopy, such as in northeast Spokane. The goal is to use these maps to inform planning, such as cooling shelters and tree plantings.”

Ultimately, Spokane Beat the Heat aims to help create protocols analogous to what is in place for a tsunami, tornado or hurricane, Henning said.

Alongside the Climate Center in being invited to join the NIHHIS-CAPA Urban Heat Island Mapping effort are the Spokane City Council Sustainability Action Subcommittee, The Lands Council, 350 Spokane and KXLY-TV.

“It’s a fascinating coalition of higher education, municipal government, environmental and climate nonprofits, and local media,” Henning said. “Chief KXLY meteorologist Kris Crocker has generously offered to help recruit citizens live on air during her weather forecast segments. And that will involve sending folks to the Climate Center to sign up.”

NOAA’s funding goes to CAPA Strategies, which provides data analytics and decision support tools to communities worldwide. It seeks to provide strategies “to move toward an equitable and adapted future.”

Over the past five years, NOAA has enabled CAPA’s Heat Watch to support more than 40 communities across the U.S. in mapping urban heat islands. Portland and Seattle have been the only Northwest cities to participate so far.

CAPA began conducting field campaigns in 2019 to provide hyperlocal descriptions of urban heat distribution. According to its website: “Our efforts have translated into local climate action and resiliency plans, the emergence of climate-relevant nonprofits, and decision-makers’ work to address the inequities inherent in urban climate challenges.”

Most of CAPA’s leadership earned graduate degrees from universities in the Northwest.

Much like Heat Watch, Henning foresees a wide range of partners in Spokane Beat the Heat: the city and county, the state Department of Health, the regional health district and regional clean air agency, The Lands Council, neighborhood councils in affected areas, and more.

Last summer was the first time Spokane has opened cooling shelters for the homeless or residents without air conditioning. In applying for the NOAA-funded program, Henning also noted long periods of unhealthy air from wildfire smoke.

“These health impacts are not evenly distributed in our community,” Henning wrote. “Poorer neighborhoods have fewer trees, which makes effects worse. We fear, but cannot yet demonstrate, that some neighborhoods are more severely impacted by extreme heat and air quality.”

With readings from proper equipment, Spokane Beat the Heat hopes to document the effects.

“The need is dire,” Henning said. “When temperatures hit 110 degrees, people start dying. And it is the poor and vulnerable who die first. The Gonzaga Climate Center is committed to doing its small part to help us prepare for the harsher world we are creating.”

Spokane residents interested in participating in the citizen science heat mapping effort can sign up and learn more online.
Get Involved
To help the Gonzaga Climate Center reach its goal of $10,000 to unlock the matching gift, donate to Spokane Beat the Heat.
Donate
Share Story