Through rainy nights and snowy mornings in winter, Gonzaga students will drag their camping gear to a designated grassy field and stay all night. For what? And why? And how does this "Tent City" work? The Kennel Club answers.

At the head of Tent City is an eight-person tent labelled “Tent Zero,” where 14 of the most dedicated student leaders of the Kennel Club squeeze inside, weathering freezing temperatures and keeping morale high for the Zags camping to secure coveted spots at Gonzaga men’s basketball games.

Every Gonzaga student knows about the Kennel Club – the powerhouse student section inside McCarthey Athletic Center that keeps the atmosphere hyped for fans and, let’s be honest, more than a little intimidating for members of the opposing teams. But few know what goes on behind the scenes of planning the highly anticipated events known as “Tent City.” Three Kennel Club seniors share the details.

Kennel Club President Macy Ryan (’22) joined the club her sophomore year after looking to be more involved on campus. Attracted to the tight-knit community, Vice President Daniel Kireopoulos (’22) joined as a junior. Treasurer Austin Versteeg (’22), who joined as a freshman, clearly remembers the moment he knew he wanted to be a part of it.

“Standing in McCarthy doing ‘Zombie’ for the first time was exciting. I remember thinking that this was an avenue to create an environment on campus where students can forget about responsibilities for two or three hours, and enjoy what they’re experiencing in the moment,” Versteeg said. 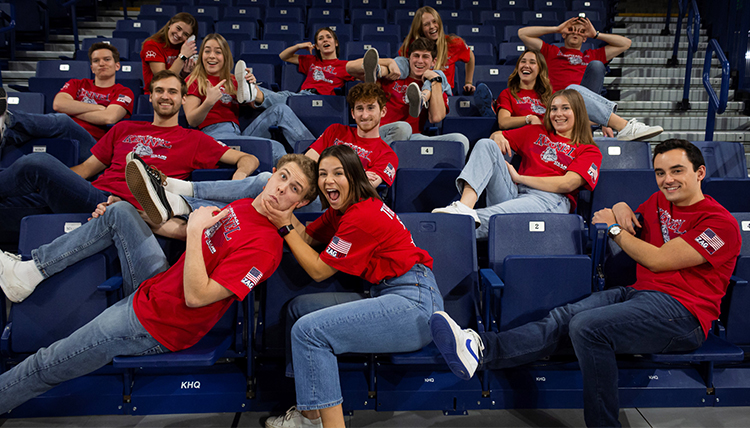 Traditions headed by the Kennel Club are both spirited and intricate. If you’ve ever had to explain Tent City to those outside the Gonzaga community, you’ve probably struggled to make it clear.

Tent City originated in 2006 to prevent students from camping independently in sub-zero temperatures, the Kennel Club partnering with the university to find a way for students to celebrate their fandom safely. This is the process:

Choosing a tweet location, Ryan said, “has a lot to do with where we can hide,” because leaders have to stay in their spot for several hours without drawing attention. A handful of Kennel Club members hide in separate locations through the morning, and the rest walk around as distractions. After the tweet, the group fills out binders and catalogs tent orders.

Rain and cold create a little misery sometimes, but students are entertained through the night, sometimes with live music, older basketball games projected on screens and dance parties. Versteeg’s favorite was a DJ competition, in which students voted and the top DJs received prizes.

In the morning, the alumni association passes out free handmade breakfast burritos and hot cocoa. Students take down their tents before the game and line up outside McCarthey Athletic Center according to their tenting numbers.

What’s the point of all this?

It’s “quite literally, a way for our most passionate zag fans to be involved going to some of the biggest games of the year,” Versteeg said.

And … another longstanding Gonzaga tradition.

I Love Being a Zag Because...

8 Kennel Club Facts Everyone Should Know

Then & Now: Hoops at Gonzaga