Wealth and Justice at Gonzaga

I have a morning habit: I’m at the Starbucks in Hemmingson soon after it opens for my quad espresso and pumpkin loaf. I take my treats down by the flickering, glass-enclosed flames in the Morris Hearth Room. I plunk myself in a rocking chair and I ruminate about this and that. I think of Scott and Liz Morris because their gift made this room possible. It’s only one gift – there are others.

Once a year I teach a course on Marxism, a designated “social justice” course. Professor Tom Jeannot in Philosophy teaches his own excellent version of Marxism.

Marx thought that capitalism, his name for the economy that had supplanted feudalism in Europe, was good at producing wealth, not good at all in producing justice. (My word. Marx himself was reluctant to use such a morally laden term.)

Yes, Marx was perhaps capitalism’s harshest critic. But not the first to see its evil effects. Adam Smith, who favored the new system, taught Marx a lot. It was Smith, not Marx, who showed how detail labor required in capitalist factories would reduce, not a few men but the majority of people in a rich country like England, to the level of stupid brutes.

That stupid brute remark always makes me think of my summer job at Coors when I was a college student. I operated a box- making machine, a fairly automated thing that only required me to think or act when it jammed. Mostly, I stood there, my mind drifting, my legs aching. At least the pay was good. Coors didn’t offer workers starvation wages the way early capitalists did. I felt flush when I cashed my check. But there was no excitement in going back for the swing shift.

Marx, like Smith, also saw the power of capitalism to change the world in good ways. Capitalist production created wealth beyond the imagining of any previous generation. The flood of technical and scientific advances that went hand in hand with new, more efficient ways of producing might well eliminate scarcity and poverty forever – if it were managed right.

In the meantime, capitalists created a world market, dragging “barbarian” nations into civilization, and creating a world in their own image.

But of course, capitalism wasn’t managed right. Not if “right” meant “to the benefit of all.” One consequence of capitalist production, a system where one man owned a factory and his many hired hands worked for wages, was to widen the income gap among classes. A few – a might few – prospered like nabobs while most sank into abject poverty.

Our economy is capitalist. It isn’t the unregulated capitalism of the mid-19th century, but it is still capitalist. And it still produces income disparities. Despite my decent wages, I didn’t end up with Peter Coors’ money. (I single Peter out because he’s about my age and I remember playing with him at Chris Johnson’s house when we were all kids.)

Sometimes our government works to soften income disparities, sometimes not. The tax code since the 1980s has widened the gap, not narrowed it.

I am not prepared to call the workings of even regulated capitalism just. Great disparities of wealth strike me as wrong. I am willing to say so in my Marxism class.

Here’s the rub. Lots of professors criticize capitalism, only to be reminded that this is to bite the hand that feeds us.

It costs money to provide a college education. Lots of it. Where does the money come from?

Well, students and/or their parents pay tuition and fees. But that’s not nearly enough. There have to be other sources.

Governments and foundations provide some help through grants. But even more comes from gifts. Alumni and other friends donate. A lot of people give a little and that’s important. Even more important, a few people give a lot.

No college or university in America, Gonzaga included, can thrive without gifts. Some of this gift income will be spent on building projects, scholarships and other ongoing needs. Some will be put into an endowment for investments.

The jarring truth: Whatever I or anybody else teaches about the inequities of capitalism, Gonzaga survives only because of the accumulations of wealth it makes possible. 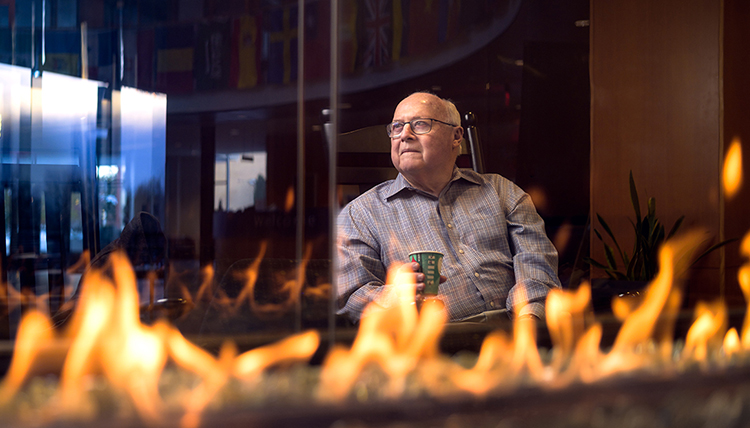 Wealth and justice may be at odds. Committed to justice, Gonzaga nevertheless finds itself dependent on wealth. How can this tension be resolved?

The people who have money must themselves be imbued with a sense of justice. They cannot be the cold-hearted, money- grubbing capitalists that critics sometimes relish portraying. That Marx so relished. And how are wealthy people to gain this sense of justice? One answer: Be educated at a place like Gonzaga. We come full circle.

You need an example. Let me tell you about Scott Morris who was in several of my classes years ago. Scott was a lovely young man. Bright, enthusiastic, outgoing, funny, caring – characteristics shared by a lot of GU students.

Scott and his classmate Liz were married soon after graduation. Before long they were joined by their first child. Right out of school with a new family – well, finding work was important. Scott took what he could find. What he found was a temporary job with the local power company, wrapping hot water heaters on a conservation project.

Scott impressed the bosses. He was put in charge of a crew. He got hired for other work when the project came to an end. Scott’s intelligence, his good sense, his elemental decency – these mattered as he earned one promotion after another. When it was all done, he had become the CEO of Avista. It wasn’t his aim in life, but Scott made a lot of money.

So, what did Scott and Liz do with their money? They took care of their family, of course. But they also gave back. Especially to Gonzaga.

Here, Scott is a symbol of how wealth and justice can come together in a capitalist setting.

True enough, Scott was a compassionate and generous person before he ever set foot on our campus. But education here encouraged these qualities. He wasn’t taught an ethic of “every man for himself” or “he who dies with the most toys wins.” He was taught how to be a good person for others.

Jeannot says that we professors will always be mendicants, or beggars. He’s right. But we at Gonzaga are lucky that we hold our hands out to benefactors who understand and want themselves to promote justice.