The quiet but slyly funny Tim Hatcher served four years as a student groundskeeper here before graduating in 1981 with a degree in political science. He worked nearly a year as a duty manager at Riverfront Park, then tried his hand at politics, serving as an aid in the Washington state legislature for three months.

“I couldn’t get out of there fast enough,” Hatcher says, trading his tie and briefcase for a pair of jeans, t-shirt and a rake as he returned to the Gonzaga grounds crew fulltime in May 1982.

The affable and hardworking Hatcher, who was promoted to irrigation specialist in 1990, lead groundskeeper in 1994 and supervisor in 2004, will hang up his rake (or snow shovel) Dec. 30 after 45 years working grounds here.

During that span Gonzaga grounds just kept looking better, and early this fall was named one of the country’s 56 most beautiful campuses by Conde Nast Traveler magazine.

But, as always, he is quick to deflect the credit to his 11 groundskeepers, who work hard at maintaining the beautiful Gonzaga landscape because that’s what Hatcher does.

“Tim is a super hard worker,” says Groundskeeper Matt Bafus, who has been with Hatcher 38 of his 40 years here working fulltime. “He is always the person who will skip breaks, skip lunch just to get the job done on time. And he is a great boss. So easy going. He’d do anything for you.”

Maintenance and Grounds Director Tomson Spink knows what he is losing. “He has a steadfast nature. He is always present,” Spink says. “From managing his crew to doing the work, he is always where he needs to be. He goes out of his way to care for his crew and enable them to do their work. He is authentic.”

Todd Ullrich has been on the crew for 12 years and watched Hatcher grow.

“He gives us the tools and knowledge we need to succeed. He has modernized our tools and equipment to keep us up with current trends,” Ullrich says.

Hatcher developed a zone program so each groundskeeper is assigned to their own zone on campus.

“It provides the ultimate in accountability,” Hatcher says. “But it is very good for each worker. They take ownership in their area. And they get quite a variety of work. They’re not stuck on the mower all week. They do weed eating, trimming, cleaning and planting beds, snow removal and trash pick-up.” “It comes down to this. Give the person the knowledge he or she needs to do their job well, provide them the right tools and materials to get the job done, and then leave them alone to do their job.”

Snowplowing is one of their jobs, and winter is perhaps the most stressful time for Hatcher, Bafus says. “Tim has to predict what the weather is going to do and get ahead of it.” 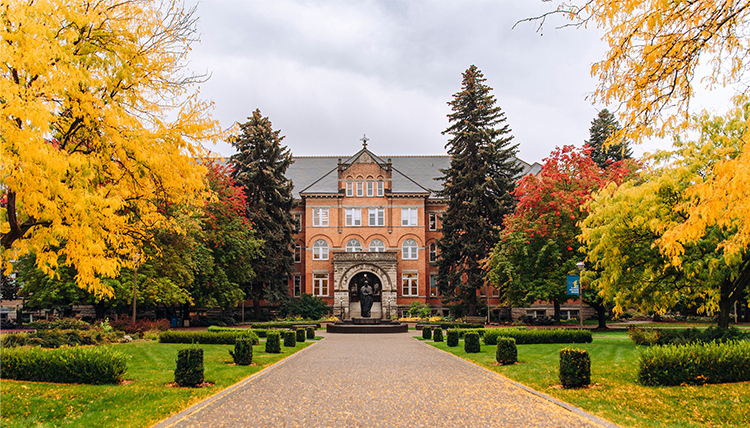 Hatcher and his crew have adopted a pre- snow substance that is applied just before a snowfall, which allows plows to remove snow down to the pavement, making pathways much safer.

Spink and Hatcher have made sure the equipment is kept up to speed. Each groundskeeper is equipped with an all-terrain Kubota to carry tools, tow equipment and facilitate plowing and trash disposal. Ninety-five percent of the campus sprinkler system is computerized with watering changes made from one central computer.

Now, imagine Bill Murray’s character in Caddy Shack, a groundskeeper trying everything within his power to remove a gopher from his land. “I’m going to get that vermin,” he says more than once.

Part of Hatcher’s job has been dealing with wildlife on campus, i.e., hornets, beavers, marmots, raccoons, wasps, snakes, birds and raptors. There is a science to trapping animals in the most humane way and releasing them in an appropriate environment. Hatcher finally has a handle on that, but he won’t miss that part of the job.

What Hatcher will miss is the camaraderie with his crew and the campus community. “The community was so very supportive when I lost my wife Lisa to cancer in 2006,” Hatcher says. “Being a part of this community has been so rewarding.”

And Hatcher has returned the favor.

His approach to life is simple, yet hard for many to attain. “Treat people with respect, give them a chance to grow, do all you can for them and let them know you’re on their side,” Hatcher says.

“We can’t replace him,” Spink says. “But we have a great crew, they’ve been led well and trained by the best. The transition should be smooth because of Tim’s legacy."