Where Past and Present Come Together

Through orientation programs, Gonzaga students, faculty and staff gain a glimpse into the work of the Jesuits who came to the West to set up missions among the Indigenous peoples in the mid-1800s. Names we hear and see on campus – like Pierre DeSmet and Joseph Cataldo – are familiar within the broader community, as well, as streets and facilities bear their names.

But more can be gained from better understanding the relationships between the Jesuit missionaries and the Salish tribes they served before the founding of Gonzaga. As with other universities, our history includes the displacement of Native communities by colonial settlers who sought to add Western education to the list of industries that would hasten economic development.

When Wendy Thompson, director of Tribal Relations; Molly Ayers, Center for Community Engagement; and members of St. Aloysius Parish and Gonzaga Preparatory School participated in a Faith Doing Justice discernment series with other Jesuits West institutions, they identified tribal relations work as a priority for Spokane’s Jesuit entities. To provide some context for Gonzaga’s tribal relationships, Thompson and Ayers, with support from Mission and Ministry’s Beth Barsotti, developed an immersion experience beginning with a visit to the site where Fr. Pierre DeSmet, S.J., began the work among the Bitterroot Salish, the people who invited the Jesuits to come West.

In May, staff and faculty from a variety of Gonzaga’s schools and programs, a GU Regent and a member of the Jesuit community set out for the St. Mary’s Mission in Stevensville, Montana, followed by a stop at the Flathead Reservation – home to the Bitterroot Salish, Upper Pend Oreille and Kootenai people – where the St. Ignatius Mission is located. The group hosted a dinner for community members, spent the night at the Tribes’ hotel on Flathead Lake and visited the mission in St. Ignatius. The final stop was the Sacred Heart Mission, built by members of the Coeur d’Alene Tribe and missionaries, at Old Mission State Park in Idaho. Participants listened to Native community members share their own histories, then discussed and reflected on the complex dynamics between the missionaries and the tribal people.

“Touring the missions was hard,” says James Hunter, director of the TESOL programs in the School of Education.

“I know it is unfair to judge the past by today’s norms, but there was an element of patriarchal, white superiority in the interactions of Jesuits and Native people that was/is inescapable - and is to some extent still reproduced today.”

From the frescos in the old chapels to the artifacts on display, exhibitions left an impression that “classical European design and artistry was meant to civilize and to replace,” Hunter says.

Rebecca Larson, HR’s senior training specialist, says what sticks with her from the mission tour is that “Indigenous lands continue to be taken from Indigenous people,” as noted on the Flathead Reservation where many non-Natives inhabit the space. She adds, “Seeing this so clearly made me reflect on the importance of land acknowledgements and encouraged me to work with Tribal Relations to write one for my department.”

“As a person of a Christian faith background grappling with the tension of evil things done in the name of a god I still believe in caused me to feel what it is like to live in tension,” says Candace Williams, a campus minister in Mission and Ministry. “I don’t think the tension is meant to be easily resolved or put on a shelf; it is healthy to continue to see what work still needs attention.”

Hunter shares a similar reflection: “It’s hard to believe how much of the cultural richness of this area has been obliterated in so short a time, and it’s hard not to see Gonzaga and the Jesuits as part of a colonizing project. I don’t doubt that most of those who came to establish missions and build schools did so with the very best intentions – what higher purpose can there be than to show ‘the way, and the truth and the life’ to those who are ignorant of it? But did they ever stop to think about other ways? Other truths? Have we stopped to think about it?” 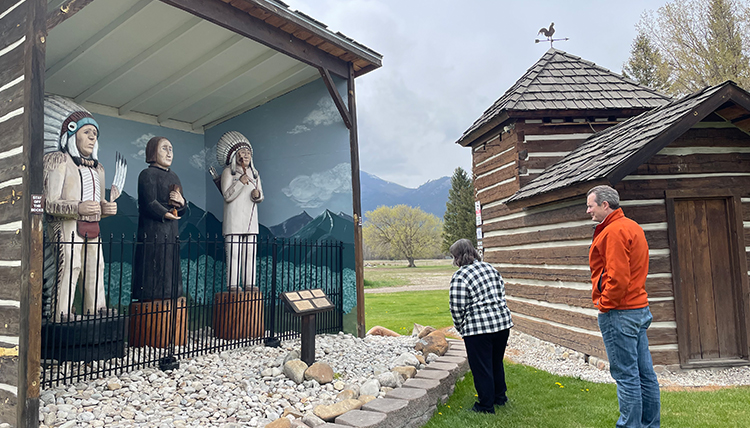 For Barsotti, whose work at Gonzaga centers on mission formation, “The experience of the mission tour called my attention to the way we tell ‘our story’ at Gonzaga,” she says. “I have grown attentive to the perspective we take when telling our story and the reality that there are many versions (and impacts) of how Gonzaga University came into being.”

Many participants also recall the warmth experienced while sharing dinner with tribal members on the Flathead reservation at Salish Kootenai College. In advance of the trip, GU’s Tribal Relations staff met with the Confederated Salish and Kootenai Tribal Council to seek support for the visit. They also hosted Gonzaga alumni, tribal council members and community members to a dinner, catered by a tribal member-owned businesses and held on the college’s grounds. Thompson says, “We tried to be good visitors by being intentional about everything.”

In turn, the hosts and community members were gracious with their time and Gonzaga grads were eager to connect with the Spokane guests.

“The hospitality and love was palpable at the Salish Kootenai College,” Williams remembers.

This fall, the Spokane CORE team continues to build upon its learning through reading about and discussing guidelines and practices for ethical and respectful engagement with Indigenous peoples to re-imagine possibilities for this work.