A Critical Eye on Gender and Power Dynamics

the work of women’s and gender studies

STORY BY KATE VANSKIKE, with reporting by ALYSSA CINK (’19) | Artwork by Tracy Martin

“So you took women’s studies courses? What on earth are those good for?”

That was a question asked of Cynthia Stavrianos, Ph.D., in job interviews, noting the mention of women’s studies in her cover letter for positions more related to her expertise in political science.

“I recognized that they were ribbing me, but it gave me a great opportunity to tell them about the very valuable critical thinking skills I learned,” Stavrianos says. “I actually ended up getting my first job with an employer who began the interview that way.”

Stavrianos was chair of the women’s and gender studies (WGST) department, while serving as associate professor of political science. She’s representative of the many faculty members who teach in WGST but represent other disciplines, such as English, sociology and religious studies. There are also two full-time faculty members trained specifically in women’s and gender studies; they hope to expand the minor to a major as interest from students fuels further development, says Stavrianos.

The Elephant in the Room: Is this about feminism?

It’s possible that few academic fields raise more eyebrows or draw more immediate criticism than that of women’s and gender studies. It immediately conjures that oft-hated “f” word: feminism. So before taking this raft too far down the proverbial stream, let’s clarify. The old notion that feminism is for bitter women who hate men is just that – an old notion. In simplified terms, feminist theory seeks to understand gender inequity and the power dynamics that create it.

As an academic field, women’s studies draws in many subjects to examine women’s lives and experiences in social and cultural constructs. It looks at systems of power and privilege, and the natural overlaps with race and class (intersectionality). As the popularity of women’s studies grew, so did the understanding that gender was more complex than merely a marker dividing people into groups. And thus, women’s studies at many institutions morphed into women’s and gender studies.

At Gonzaga, the Women’s and Gender Studies mission is to “employ critical feminist theories and methodologies to foster transformative understanding of the intersections of socially defined identities” and to “foster an ethical and intellectual commitment to dismantle sexism, heterosexism, and other dimensions of intersecting oppressions such as racism and classism.”

Growing Popularity of Women’s and Gender Studies and Careers
300% increase since 1990 in the growth of women’s and gender studies degrees in the U.S.
In 2015, more than 2,000 degrees were conferred. (National Center for Education Statistics)

The Educator: Christina (latridis) Pirzada (’13)
Women role models always inspired Christina (latridis) Pirzada: her mother and sisters, authors, athletes, politicians and especially pilots. During her first two years at Gonzaga, Pirzada had a double major in English and psychology, and gravitated toward classes that engaged with the topics of gender and power dynamics. She “stumbled into” the WGST minor as a result. The more formalized studies trained her to recognize gender dynamics and to respond more purposefully, she says.

“It’s a constant lens that once you try on, you never want to take off,” Pirzada says.

That lens became especially meaningful after she earned her master’s in education. As a teacher, school administrator and now a project manager at an education technology company, her women’s and gender studies helped her mentor students, challenge their assumptions about feminism and guide their consideration of identities reflected in the literature they read.

“It was immediately helpful in deciding what kind of teacher I wanted to be, and what kind of students I hoped would leave my classroom,” she says. In her current role in tech, there’s great pride in selecting content that K-12 students all over the country read on a daily basis. The WGST lens, Pirzada says, provides perspective that “has helped me navigate workplace dynamics and inspire conversations.” It has impacted her hiring practices, too. “We’re not homogeneously picking candidates for certain positions that might historically be pretty gendered.”

It’s true: When Luke Johnson registered for a literature course called “Sex and Power,” taught by Ann Ciasullo, professor and former department chair, he worried that feminist courses may not be welcoming to male students. Those fears were dispelled as he participated in a feminist critique of masculinity in “The Sun Also Rises” and class conversations about race and gender that he describes as vulnerable and authentic.

“My computer classes were predominantly male, almost entirely white, and didn’t really talk about people. It was refreshing to take a step back from the technical discipline and think about the world I was living in,” he says.

Historically male-dominated, the computer science field has been criticized for the “toxic elements of their masculine space,” says Johnson. And that’s why he’s quick to recommend that everyone in tech take classes in women’s and gender studies.

“Just being able to fight any amount of prejudice on the inside is really important,” he notes. It’s a mindset that has earned him a reputation for advancing equity in higher education, and even earned him a fellowship during graduate studies. As a Ph.D. student in cryptography (specifically biometric authentication), Johnson’s peers were mostly male in a culture largely focused on the individual. He helped to create community by organizing gatherings for people, and also started mentoring high school students.

“Having a critical analysis of both gender and race – which come together a lot in women’s and gender studies – meant that I could be a better mentor to the kids I serve,” Johnson says. “I can be a better Ph.D. candidate to my adviser, I can be a better cohort mate in my education class. There are a lot of things that benefit from recognizing the institutions of gender and the linked oppression with other marginalized identities.”

“The women’s and gender studies minor is useful for many reasons, but one of them is its capacity to build empathy. You ask, ‘Who’s not at the table? How are we excluding people?’ I think that empathy can come from the study of oppression.”

Austin Caswell pursued the WGST minor while double majoring in criminal justice and philosophy. In his first course with Associate Professor Sara Díaz, he sought better understanding his place in the world. What stayed with him the most, he says, was the language he gained for describing his own experiences, and for understanding the complexities of identity. He learned to ask more perceptive questions when approaching challenges without easy solutions.

“My first job out of college was as an admissions counselor for a small university, and women’s and gender studies was the best prep for that job. It gave me the toolkit to be able to work with diverse populations and to see other people’s perspectives with more ease,” says Caswell.

Now he is a recruiter with older, mid-career individuals, and feels able to connect with them despite the age difference, and to recognize where ageism is present with potential client partners. “Without question, my gender studies minor is what stuck with me the most and has been the most impactful, postgraduation.”

Capstone Examples
» Madison Schultz (’20) created a framework for an online alumnae/i network to keep WGST graduates connected to one another and the department, for career mentoring, continued literacy in the field, and personal connection. Her project was so impressive that funding was secured to take it from concept to reality.

» Seniors conducted a focus group – dubbed a “Soup-osium” – to gather with current minors for a meal and solicit suggestions for the department. One interesting finding was how many students knew before they arrived at GU that they wanted to pursue women’s and gender studies. As a result, the seniors engaged with the Office of Admission to learn how to connect with prospective students and play a role in helping students choose a Gonzaga education. 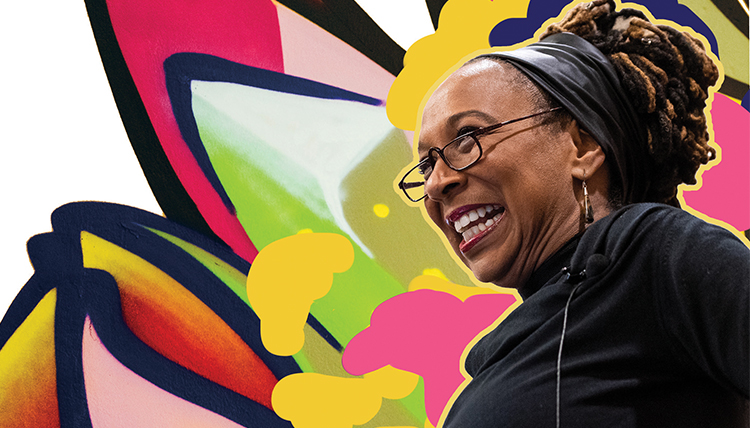 Kimberlé Crenshaw, J.D.: Famed scholar who developed the theory of intersectionality, Crenshaw specializes in race and gender issues. Her 2019 lecture at Gonzaga was a highlight for Women’s and Gender Studies faculty and students.

Lady Gaga and The Big Lebowski:
The Gender and Pop Culture Speaker Series

It began in 2010, with a single student and a single essay on Lady Gaga.

Ashley Ruderman (’12) was a sophomore in my upper-division English course “Literary Theory and Cultural Studies,” in which students learn how to read texts from a variety of theoretical perspectives. She had written an extraordinarily smart paper in which she applied feminist theory to one of Lady Gaga’s videos, “Bad Romance.”

One day, I asked her if she’d like to share her work in a public presentation. Lady Gaga was huge at the time, and I had a hunch that an academic talk about her would draw a big audience. On a cold February night that semester, Ruderman presented her scholarship to more than 60 peers, and the discussion that followed the formal presentation was a teacher’s dream: lively, engaging, full of energy and excitement.

As the night wrapped up, I realized this opportunity for students to share the intellectual work they create in the classroom, in particular work about popular culture, needed to be an ongoing event. Thus was born the Gender and Pop Culture Speaker Series, co-sponsored by the Women’s and Gender Studies and English departments.

The series has hosted more than 50 student presentations on a host of topics related to representations of gender in popular culture, from Beyoncé to Bromance films, from Twilight to Taylor Swift, from Facebook to Friends. The participants represent a wide range of majors and minors and thus have brought with them myriad disciplinary perspectives: women’s and gender studies, English, sociology, psychology, communication studies, philosophy, and even computer science.

The presentation titles have been as creative and engaging as the presentations themselves. How could anyone resist “The Dudettes Abide: A Feminist Reading of The Big Lebowski” or “Eminem: The Blackest White Man in Rap”? I know I couldn’t, and neither could the audience members.

That’s what makes this Series so special: the way it showcases the students’ desire to understand more deeply the gendered world in which they live, and the way it invites others to participate in conversations about that world. In the end, I like to think of the Gender and Pop Culture Speaker Series as the mission in action: In a single hour, anyone who attends will witness our students’ remarkable and impressive capacities and dispositions for reflective and critical thought with regard to gender representation. I can’t wait to see what the next decade brings.

A Critical Eye on Gender and Power Dynamics