Spring signals celebrations of all kinds – graduation, summer plans, the end of a tough year. It’s also the time students in cultural clubs at Gonzaga host their annual events to bring the community together and showcase some of the favorite aspects of their respective cultures.

This year, hybrid classes and quarantine restrictions meant the events couldn’t be held in person but that didn’t stop anyone; it just required a little more creativity to foster the same sense of togetherness.

For Lyca Racho, the public relations representative for FASU, the difference between being Filipino and Filipino American was key in determining her personal identity.While her parents were born and raised in the Philippines, Racho moved to the United States shortly after she was born.

“I’ve had the same school and social experiences as anyone else that grew up in America, so I always felt there was a disconnect between me and my parents,” she said. “We’ve had completely different lives.”

This experience rings true for many members of FASU and having that community of like-minded students has made a big difference in the way she sees her relationship with her parents, Racho said.

Normally, FASU hosts “Barrio” to replicate a big Filipino family gathering and share their favorite foods and traditions. This year, Barrio featured videos that highlight traditional dances performed by members of the club.

Even without traditional methods of celebrating, tradition carries on.

The Hawaiian Pacific Islanders Club (HPIC) is all about creating space – a space to feel comfortable in one’s own identity and a space to learn.

PR representative and club member Josiah Saifoloi found the people he met through HPIC eased the transition from Hawaii to Spokane.

“In terms of diversity, culture and climate, Spokane is very different,” he said. “It was very important for me to have that space to build community away from home.”

Camping and ski trips are two of the ways the group has stayed connected in the past, plus the annual Luau held every April. The Luau brings a piece of home to Gonzaga for one night and the highlight of it all is the dancing.

This year, due to the pandemic, HPIC partnered with the Asian American Union (AAU) and FASU to put on a virtual festival. They livestreamed dances and performances and prepared boxes containing favorite foods from each culture for purchase. All proceeds supported organizations fighting against anti-Asian racism.

International Students Union is home for students from around the world. The club promotes diversity around Gonzaga’s campus while creating an atmosphere where all students can lead and engage in activities that highlight their backgrounds and cultures.

For international students, the pandemic was especially difficult. Quarantine meant being a long way from families and potentially really isolated. Bringing the ISU community back together was imperative.

“We’re trying to be your family here at ISU,” Vice President Mateo Acosta said. “As an international student, sometimes you feel a bit lost – a new country, a new culture, a new everything. In those times, it’s nice to have a community like this one.”

The ISU Banquet is one the biggest ways club members bring a little piece of home to the Gonzaga community for one night. This year, in place of that, ISU created care packages for students.

Filled with a t-shirt and snacks from around the world, anyone could purchase for $10, and the first 100 people to buy something for $10 or more from a local Asian-owned business received the package for free.

“We wanted something at Gonzaga that [international students] would remember and something that would create some diversity,” PR Representative Jessica Dao said. 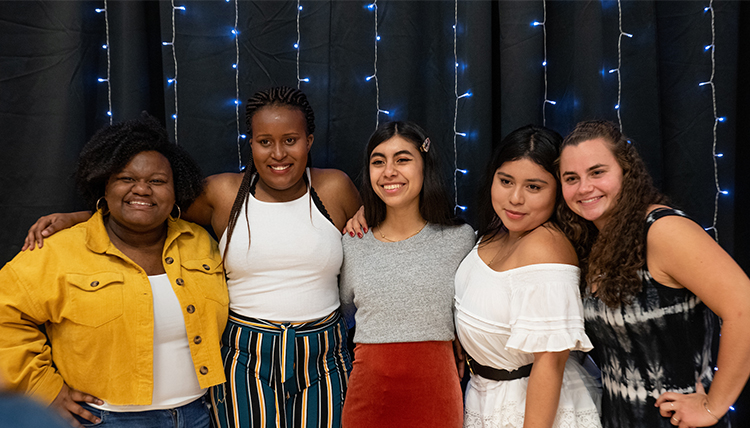 This group of students had the opportunity to celebrate the International Student Union banquet in 2020 just before the COVID-19 pandemic hit.

Black Student Union has always been a support group for members on campus. With weekly meetings, Malcolm Duncan, PR representative, said its a time to share challenges and to just check in with one another.

This year, members of BSU faced two hate crimes– one in the form of a racist phone call made to a Black student at the Welcome Desk and the other a “Zoom bombing” by anonymous attackers shouting racial slurs during a Sunday meeting. Both required intense efforts among members to express their needs and to collaborate with university leaders on action.

Though incredibly difficult, those issues didn’t stop the festivities that would normally occur at the BSU dinner, replaced this year by a celebration of Black History Month.

Duncan said events and speeches were pre-recorded and sent to attendees, who were asked to make a donation of at least $10 to a Black-owned business.

“This year has been emotionally, physically and mentally taxing,” he said. “What we did for the celebration was a nice way to celebrate something about ourselves during Black History Month.”

In the wake of several anti-Asian hate crimes, Asian American Union worked hard to establish their club as a safe place for their members within a predominately white institution.

From open discussions to public support events, AAU hosted no shortage of events this semester to ensure the right conversations were had and that good allies were created within the Gonzaga community.

One of the most important things AAU does, according to Vice President Tia Moua, is recognizing the differences in Asian American identities and embracing that diversity so those voices are not erased.

In the past, the AAU Night Market has served as a hub for celebrating those identities and giving a voice to club members. The message behind the event didn’t go away, but COVID-19 cancelations meant a new method of celebration needed to be found.

A partnership with FASU allowed students to display the parts of their culture that brings them pride despite restrictions. Club members recorded videos of traditional dances and poetry recitations, and AAU was able to put on their well-known fashion show to model everything from traditional Chinese home outfits to modern day pieces from all the Asian cultures.

“It was nice to have a moment to celebrate and see the beauty of our cultures and how resilient we are,” Moua said.