"Pringles" Roof at St. Charles Church is a Engineering Marvel

Although Spokane doesn’t have the most recognizable skyline, assistant professor of civil engineering Joshua Schultz would argue that the buildings within it are nothing short of spectacular. “I don’t think Spokane associates its identity as a city with its architecture or engineering, but there's still significant and impressive work that has been done… there are these needles in a haystack or diamonds in the rough that are easy to overlook,” Schultz said.

One of those overlooked buildings is St. Charles Church, located at 4515 N. Alberta St. near the Garland District. Although from the outside it may simply look like an ordinary church with a unique roof, St. Charles’ roof is considered a historical feat in engineering by most in the Spokane civic engineering community. Schultz recently collaborated with engineering firm Thomas Tomasetti and published an article about the history of the church and exactly what makes its roof so special.

In his studies of the roof, Schultz found the roof to be stronger and stiffer than traditional roof typologies, yet required less material in its construction. Schultz said that the local builder used complex geometry, instead of stronger material, to construct the roof, he said.

To find the most efficient way to construct the roof of St. Charles, the engineers looked to an unlikely source of inspiration: the Pringles chip.

“The shape of a Pringles chip is a paraboloid. Pringles didn’t use some super strong chip material, it's the same chip, but the actual geometry makes it stiffer and stronger,” Schultz said. Using the paraboloid, the engineers constructed a substantially stronger and stiffer roof, while using the same less material than it would take to a typical flat concrete roof. “Instead of brute-forcing the design, leveraging geometry allowed engineers to be more efficient and elegant. So you get a design that is very materially efficient by simply  new geometries or even looking back to old ones,” Schultz said. 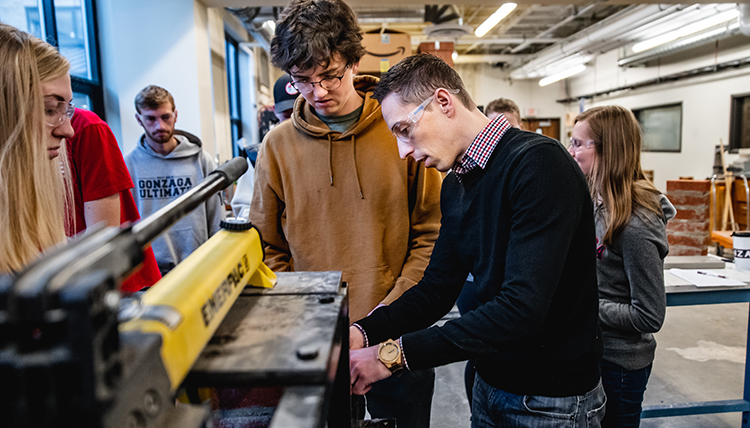 St. Charles Church was constructed during a sort of engineering boom. Following World War II and the return of American troops back home, the demand for the construction of new buildings increased rapidly. With them, troops brought knowledge from aerospace design of fighter planes as well as tales of beautiful European structures back from the war, comprehensively influencing civil engineering. “When it comes to efficient material use, novel designs, aesthetically pleasing, beautiful structures, a lot of those weren’t pioneered in the U.S. Historically, we’ve always had an abundance of material… so you could produce a lot of [buildings] cheaply and because of that, engineers didn’t need to be as innovative,” Schultz said. However, because of the massive war effort, there was a significant shortage of the usual materials, forcing engineers to be creative. Constructed in 1959 and finished in 1961, St. Charles’ roof was a part of that creative renaissance.

Although St. Charles’ roof is more structurally sound than most, in his studies, Schultz believes that it will soon need restoration. Made of concrete, the roof has started to crack slightly, causing it to slightly sag. Furthermore, the weight of the stained glass inside of the church has caused the structural supports for it to degrade. Over the summer, Schultz will be conducting a forensic analysis of the church to determine how to improve the structure of the church.

While St. Charles Church has occupied most of his time recently, Schultz and his students from Gonzaga's School of Engineering and Applied Science have studied plenty of other buildings around Spokane that he considers to be historical feats of engineering. “Seniors at Gonzaga are getting exposed to local real world scenarios like the Division Street Bridge, the '74 Expo Pavilion, St. Charles Church and more recently the Catalyst Building, which is one of the largest zero-carbon, zero-energy buildings in North America,” Schultz said. Specifically, his students have studied the three iterations of the Division Street Bridge and its structural failure that resulted in the death of five people, and the new features of the redesigned '74 Expo Pavilion at Riverfront Park.

For some, Schultz’s work may simply seem like the study of buildings and how they were constructed, but he prefers to see his work as analyzing a piece in a greater story of the way humans create their own sanctuaries.

“Architecture is the story of place, of people and of time. The way you describe that story is through geometry, the language of structure,” Schultz said. “If you use a good language, you can tell a better story than if you use an inefficient one.”
Explore other opportunities in engineering at Gonzaga.
Get Started
Share Story