Preserving Memories on the Mount

In May 2016, Mary Margaret (McLafferty) Brajcich (’74) and her husband Gary (’73, ’77 J.D.) made the windy drive up the hill to the Jesuit Cemetery at Mount St. Michael’s in northeast Spokane. They had come for the burial of good friend Father Frank Costello (1921-2016). What they found, she called deplorable.

“I just about died there on the spot,” says Mary Margaret. “Grass had turned brown, and weeds had grown over some of the tombstones. It was clear no one was taking care of this sacred place. It was so unfair to our dear Jesuits placed there.”

That was the catalyst for a labor of love by a handful of compassionate souls to breathe respect into a place so alive with history. Some of the greatest minds and biggest hearts in Gonzaga’s 133-year story rest there. It’s almost impossible to walk through this place and not start a dialogue in your mind with those who have inspired you over the years — former professors, administrators, spiritual directors and friends. 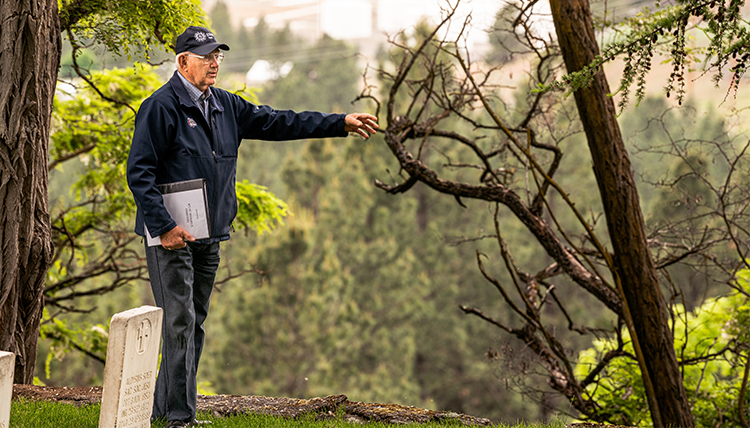 Where Do We Start?

Mary Margaret tried for more than a year to determine who was in charge of the cemetery’s upkeep, to no avail. Then she contacted Dan Harbaugh (’70, ’74 J.D.), another good friend of Fr. Costello, who got wheels turning.

“I went up there to check it out,” Harbaugh says. “It was horrible. There were lots of dead trees and downed limbs and some headstones were in disarray. The directory was a mess and many of the names were smeared beyond recognition.”

It was quite a chore determining who was responsible for the cemetery, let alone its upkeep, Harbaugh says. After an exhaustive search, and as a last resort, he wrote to the Jesuits West provincial, Father Scott Santarosa, over Christmas 2017, and got a response from Father John Mossi, director of benefactor relations for the province. He put Harbaugh in touch with Kim Randles, development director at the Northwest office in Portland, and action ensued.

She flew to Spokane and met with Mary Margaret and Harbaugh. Randles mentioned previously having had a chat with Martin Weber (’56, ’64 J.D.), who had an interest in the restoration project. His brother Fr. Dan Weber and his uncle Fr. Hubert Adams are both interred in the cemetery, as well as most of his undergraduate professors.

Weber joined the self-appointed committee and in spring 2020, together they tackled the first necessary repair, a broken water line and sprinkler system. Seventy-eight grave markers were removed so 6 inches of garden soil could replace worn topsoil, grave markers were reset and the burnt-out section was hydroseeded. A 20-car parking lot was also created.

Weber, then age 85, spent about 40 hours in three-hour increments, from June to September 2019, cutting dead tree limbs, clearing fallen branches, and stacking dead brush to be shredded and hauled away. He also cleaned up the forest within 30 feet of the cemetery boundaries, complementing a panoramic view to the northwest. 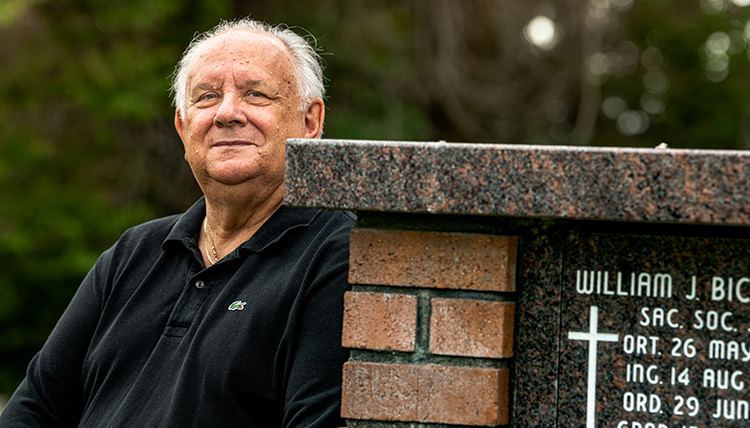 Saved from a Mistake

And if it wasn’t for Weber, the Jesuit cemetery may have gone by the wayside long ago. In 1979, the Jesuits sold farmlands to the Tridentine Latin Rite Catholic Church, which had taken over Mount St. Michael’s Institute, no longer a site to train Jesuit scholastics. In closing the real estate deal, the Jesuits mistakenly included the cemetery as part of the sale.

When discovered, Jesuit leaders asked Weber, an attorney, to “get our cemetery back.” Turns out, the well that provides water to the Mount was not part of the sales agreement, and the Tridentines were at risk of losing their water supply without it. The Jesuits agreed to deed the Tridentines the water well and lines in exchange for the deed back on the Jesuit half of the cemetery, with the condition that the Tridentines provide the Jesuits with water in perpetuity, at no charge.

The renovated cemetery also includes five new benches and a new granite and brick, easy-to-follow directory, coordinated by Brajcich. A new granite monument welcomes visitors to the cemetery of the Jesuits West Province. 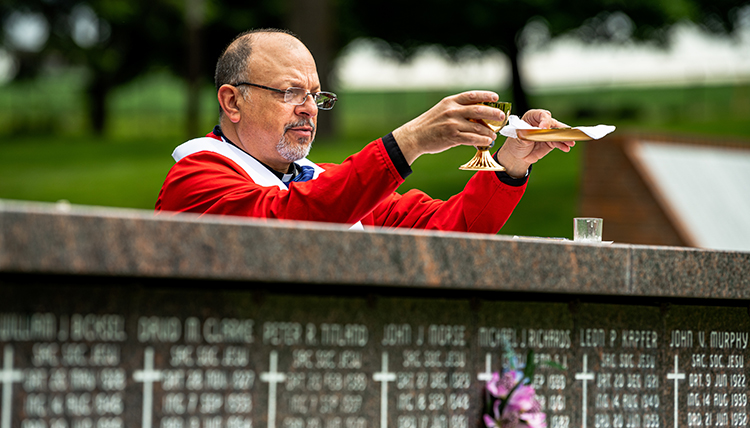 (Pictured above: Father Tom Lamanna rededicated the cemetery on June 12, 2000, offering communion to the small group of volunteers who made the Jesuit beautification project possible.)

Thanks to this effort of a small number of gracious volunteers – Brajcich, Harbaugh and Weber, Marguerite Busch (’67, ’89 M.O.L.), Dan (Seattle U grad) and Joyce Murphy, Fr. Mossi, Randles and St. Aloysius Church Pastor Father Tom Lamanna (’85, ’90) – the committee can now rest in peace, along with their Jesuit mentors and friends. And since this project began, Fr. Santarosa solved another issue, appointing the St. Al’s pastor as responsible for overseeing the cemetery.

The cemetery is located at 8600 N. St. Michael’s Road, atop a 320-foot hill overlooking northeast Spokane, next to St. Michael’s buildings.Visitors are welcome. There you’ll find a peaceful calm on this patch of sun-kissed land, quieted by the shade of the overhanging trees and free of the city’s bustle. Find serenity walking among, and talking with, the giants of our Jesuit mission in the Pacific Northwest. It might be the most peaceful place you’ve ever been.
Make a gift to help ensure the cemetery’s upkeep.
Jesuits West
Share Story

Preserving Memories on the Mount

First-Gen Everything, Now an Attorney

Catholic Church's Primary Voice on Climate to Speak at Gonzaga