Incarnating our Mission of Reconciliation by Working for Justice

|
Office of Mission and Ministry

(The following is a message from the Office of Mission and Ministry to Gonzaga employees.)

The second Universal Apostolic Preference calls Jesuits and Jesuit works to walk with the poor, the outcasts of the world, those whose dignity has been violated, in a mission of reconciliation and justice. Arturo Sosa, S.J., superior general of the Society of Jesus, makes clear that any movement toward reconciliation is not possible without first striving toward justice. And justice, in the Catholic tradition, demands affirmative redress. Accordingly, Sosa argues that the work of justice entails actively resisting and dismantling social structures of oppression and domination and, in turn, building up more just social systems in their place. In the Catholic and Jesuit traditions, this involves looking “at the world and at history with the love of the One and Triune God” so that, with God, we might “be moved by the cry” of victims of cultural, systemic, and structural oppression. Indeed, the biblical tradition affirms that it is in the cries and laments of victims of systemic and structural injustice and violence that the voice of God’s Spirit is heard most clearly. These cries are God’s call to justice—God’s call to recognize both the causes and effects of historical injustice, to identify our own personal and corporate active and passive participation in them, to confront and resist them, and to find new ways of living together that incarnate God’s gratuitous love for all persons.

The Catholic tradition that shapes Gonzaga’s mission summons us to recognize in those laments nothing less than the voice of the Spirit of God, who dwells within each person, calling us to participate in God’s project of justice.

The killings of Breonna Taylor, Ahmaud Arbery, and George Floyd without regard for the God-given human dignity and inherent value of Black life are visceral reminders that racial injustice not only has shaped but also continues to shape the way we live and work in this country. As the Catholic priest and theologian Bryan Massingale writes in his book, Racial Justice and the Catholic Church, “The institution of black chattel slavery both expressed and continues to shape our nation’s cultural consciousness." The set of meanings and values that informs’ our public life, forged in the crucible of slavery, indelibly links ‘blackness’ with being ‘less than white’ and thus suited for less than fully equal treatment.” This truth sits at the heart of the laments cried out by persons and communities of color across our country in the wake of the killings of Breonna Taylor, Ahmaud Arbery, and George Floyd. The Catholic tradition that shapes Gonzaga’s mission summons us to recognize in those laments nothing less than the voice of the Spirit of God, who dwells within each person, calling us to participate in God’s project of justice. As a Catholic, Jesuit university we are called, in the cultural context of anti-Black racism, to attend to the cries and laments of victims of racial injustice and to affirm with them that Black Lives Matter. And we are called to discern how we can incarnate this affirmation in the way we act as a university community. We called to discern how this affirmation can shape the way we teach and learn, research and create, minister and work so that Gonzaga might heed the call for Jesuit universities to be agents of social transformation.

As we reflect on the academic year that has just ended and look forward to the next academic year, we encourage you to consider how our shared work might participate in efforts to dismantle institutional and cultural forms of racism and to build up a more just community by engaging one or more of the following resources. We recognize that this list is by no means exhaustive. But, they are a small sampling of the rich body of prophetic writing and speech that invites us to consider how working toward racial justice is essential to our mission as a Catholic, Jesuit, humanistic university: 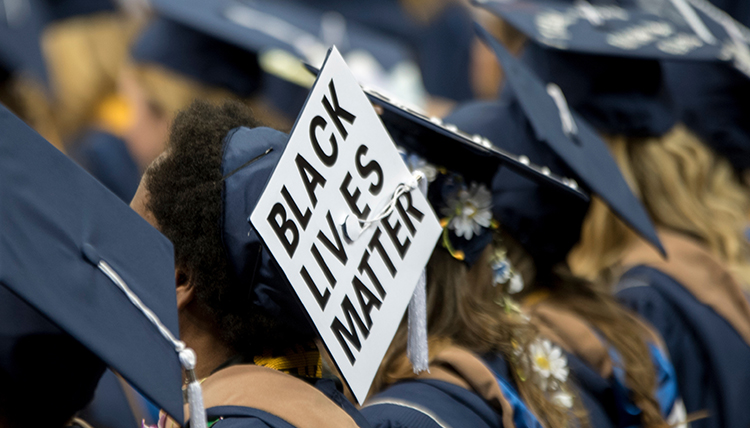