The Center for Civil and Human Rights brought the Hon. John Charles Thomas to Gonzaga Law as its 2019 Jurist-in-Residence. From March 18 through 23, Justice Thomas taught a one-credit short course on civil rights lawyering and delivered the annual William O. Douglas lecture on the First Amendment, among other activities on campus.

Justice Thomas was the first African American to sit on the Virginia Supreme Court and, at 32, he was the youngest justice ever to be appointed. In 1995, he was awarded the NAACP’s Lifetime Image Award. In 2005, he was appointed to the International Court of Arbitration for Sports based in Lausanne, Switzerland. In 2014, he was named distinguished Alumnus of the UVA College of Arts and Sciences. In his spare time, he also teaches appellate advocacy at UVA School of Law.

“Judge Thomas brought a wealth of experience and insight to our campus,” said Professor Jason Gillmer, the Director of the Center for Civil and Human Rights. “He is the quintessential activist, a consummate professional, and an engaging speaker. He kept students on the edge of their seats with stories of growing up in the segregated South and how the legal system might be used to address injustice and promote equality.”

Justice Thomas’ career is a testament to living deep and getting the most out of life. Before 1965, Thomas went to an all-black school which used the hand-me-down books and leftover materials from the area’s white schools. Even though Brown v. the Board of Education was decided in 1954, the decision was not implemented in Virginia until 1965 and after many years of litigation. Thomas, however, was a firm believer in the power of education and dedicated his life to overcoming whatever obstacles lay in his way.

After earning both his undergraduate and law degrees from the University of Virginia, Thomas joined Hunton & Williams, then named Hunton, Williams, Gay & Gibson. He was the first African-American at the firm. "I did not know what to expect,” Thomas said. “We were not many years from the searing violence that scarred the nation during the days of the Civil Rights Movement; the Selma March, King's assassination, riots in the streets of major cities all were within recent memory. And so it was a major step to be the first black lawyer at Hunton & Williams. I saw it as part of the integration of our society." In 1982, he was made partner and was the first black lawyer in the history of the American South — from Virginia to Texas — to come to an old-line, southern law firm out of law school and "go up the line" to make partner.

In 1982, Virginia’s Governor Chuck Robb appointed Thomas to the highest court in Virginia. The justices with whom he shared the bench had never worked or studied with a black peer.

In his William O. Douglas lecture, Thomas urged listeners to stay away from the morass that is “the founders’ intent” when reading and interpreting the U.S. Constitution. Instead, Thomas asked his audience, "If you had a chance to write the Bill of Rights today, how would you write it?" The question reminds us that—regardless of America’s past—we all have a role to play in shaping its present and future. 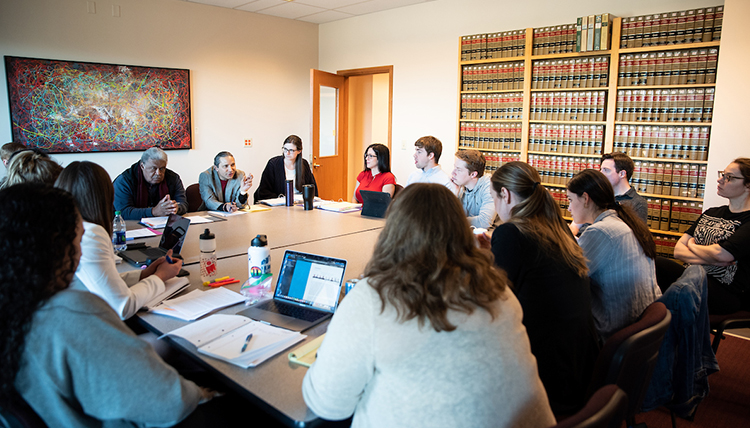 Justice Thomas teaches a class during this time at Gonzaga Law