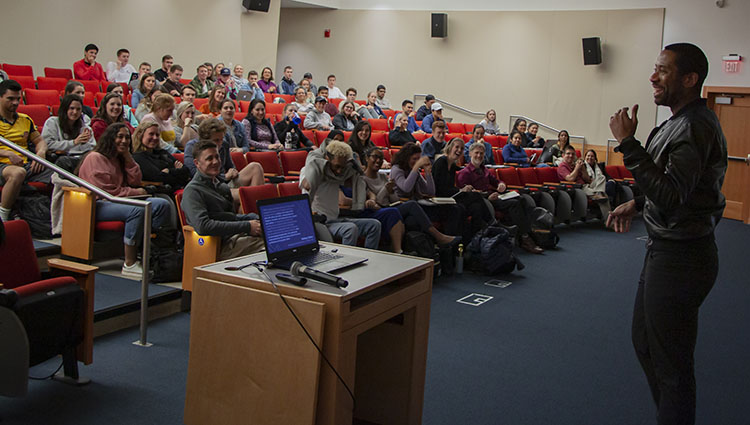 A soap dispenser that only recognizes pale hands; facial recognition sensors that can’t see dark faces; health tech gadgets that won’t sense a pulse through black skin. Guest speaker Dr. Woodrow W. Winchester III pointed out to a Gonzaga audience that these unintended technical problems are a sign that engineers need to change the way technology gets designed.

“It's my intention to motivate, just continue deeper thought around these sorts of issues, and begin to think about intersectionality and how it fits around STEM, how we can play in the sandbox together. What we’re trying to accomplish, at the end of the day, is to make the world a better place,” Winchester told a mix of engineering, computer science, and social science students.

The open event, “Afrofuturism as a Design Lens for Inclusive Technological Innovation,” took place Mar. 26 in the Hemmingson Auditorium as part of GSBA’s Intersectionality Week. Dr. Winchester is an associate professor of engineering management at Robert Morris University, Pittsburgh. He describes his work as an engineering educator and advocate for increasing diversity and inclusivity within the tech industry.

To work towards that goal, Winchester talks about a tool called speculative design. By ignoring immediate marketplace demands and focusing specifically on an end-user’s perspective, he argues that designers get a better understanding of the users’ needs and requirements – the root of a problem instead of temporary solutions to symptoms.

Winchester brought up the film Black Panther as an example of both speculative design and Afrofuturism – exploring black identity and culture through imaginative possibilities such as science fiction. By speculating what African technology would be like without colonialism, the popular Marvel Universe film took a conceptual approach that focused on what its characters would want and need.

“It’s putting these often-disenfranchised voices up front and central,” he said.

Earlier in the day, Winchester led the first-year engineering seminar classes in speculative design workshops. Winchester followed up his student discussions with a workshop for faculty members from the School of Engineering & Applied Science (SEAS) and College of Arts & Sciences.

“He was talking about this idea of designing for inclusion,” Jimenez said. “I automatically was fascinated, and I knew that I had to bring him to Gonzaga.

“The reality is if you ‘can't see race,’ you can't see racism. We have many other identities here. We have to be able to engage with other identities in order to create solutions for the future that are inclusive and equitable, because that's our mission statement,” he said. “Is the mission integrated successfully into our curriculum? I’m a big believer that the answer to that question lies in who we become as students when we graduate,” he said.

Jimenez received support from Gonzaga’s Center for Community Engagement, the Gonzaga Student Body Association, and the School of Engineering and Applied Science.